Could ships laden with billions of dollars of U.S. farm commodities continue supplying China if it invaded Taiwan, a country the U.S. has sworn to support?

That’s just one of the questions some of the top U.S. ag leaders are quietly discussing as China ramps up its aggression toward Taiwan and Russia continues its invasion of Ukraine, a country that Moscow believes it should incorporate – much like Beijing looks at Taiwan.

“All bets would be off if that were to happen,” one ag sector source said. “This is one of the things that keeps me up at night.”

The prospect of a forced Chinese “reunification” with Taiwan flared again this weekend after President Joe Biden told CBS News the U.S. military would defend Taiwan in the event of an invasion.

Debate over a major world power like China invading a smaller neighbor grew more credible after the Feb. 24 invasion by Russia into Ukraine. While most of the international community has rallied to support the besieged Ukrainians, China is a glaring exception. The country made a point of cooperating in military drills with Russia during Biden’s recent trip to Japan.

“Beijing’s defense of (Russian President Vladimir) Putin’s war to erase Ukraine’s sovereignty and secure a sphere of influence in Europe should raise alarm bells for all of us who call the Indo-Pacific region home,” Secretary of State Antony Blinken said in a recent speech that was primarily dedicated to U.S. policy towards China.

Several ag leaders say they are discussing the controversial – and some say far-fetched – possibility that China tries to take back Taiwan and the impacts on U.S. exports in tight-knit circles or with Biden administration officials. 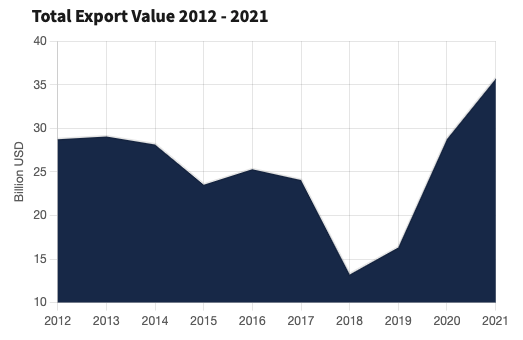 Total annual U.S. agricultural exports to China (Source: USDA Foreign Agricultural Service)“It’s on the back of everyone’s mind what would happen,” said another ag leader, who also stressed the potential invasion of Taiwan is not on any public agenda or the official topic of board room meetings. “It’s talked about at the back of the room.”

“We haven’t talked about it in a formal setting – It’s quietly talked about,” yet another source from a major ag group said.

Those who spoke to Agri-Pulse on the subject did so anonymously due to the sensitivity of the subject.

“It would be significant. If it’s going to happen, it’ll be in the next two years,” said another source, who stressed that it’s a topic in high-level discussions, but not something that is yet on any official agenda of the source’s organization.

All of the ag leaders who spoke to Agri-Pulse stressed their belief and hope that China would not try to violently annex Taiwan, but some noted that the repercussions are too severe not to completely discount the possibility.

“It’s something that we’re talking about,” another U.S. high-echelon ag leader said. “We have talked internally with our … industry.”

The threat of China invading Taiwan is also a threat to American farmers, who historically have been collateral damage in major conflicts even if the U.S. military isn’t directly involved.

But Biden has now said twice that the U.S. military would be involved to defend Taiwan.

“This would be a war, so you’re not going to sell to a country in which the U.S. is at war with,” said one official, who stressed that leaders of their group are not discussing the possibility of a China-Taiwan war.

China is the largest foreign market for U.S. agricultural exports.

The U.S. exported roughly $32.8 billion worth of agricultural commodities to China in calendar year 2021, and that looks to increase further this year, according to data from USDA’s Foreign Agricultural Service. China imported about $18.3 billion in the first seven months of this year, up from $15.8 billion in the same time frame last year.

U.S. ag exports took a major hit the last time there was major trade friction with China. The U.S. hit China with billions of dollars worth of tariffs in 2018, provoking Chinese retaliation, and total U.S. ag exports dropped to about $9.2 billion. 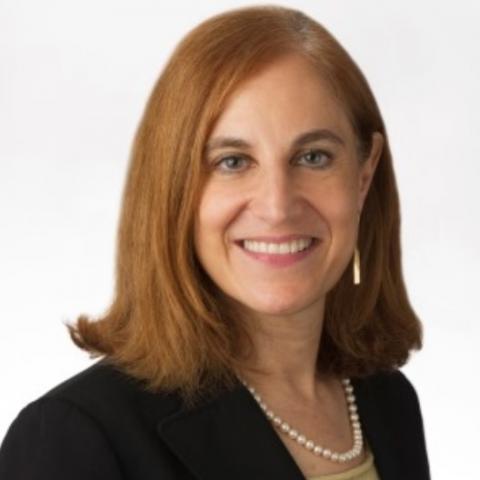 “The topic of a possible Chinese invasion of Taiwan has become quite prominent in Washington, D.C. and in other capitals,” she said. “There’s almost alarm and hysteria about the possibility of an invasion. There are companies all over the world who would like to understand what the risks are and they are asking for advice."

While the international community does need to work to prevent a potential invasion, she said it seems unlikely.

“I don’t think we should be quite as alarmed as many people are,” Glaser said.

That’s primarily because Chinese President Xi Jinping knows the risks of an invasion on his country, which is suffering a slowing economy as it continues to deal with the impacts of the COVID-19 pandemic. And a failed invasion, she stressed, would likely throw into question the legitimacy of the Chinese Communist Party.

One major risk to China, three U.S. ag leaders told Agri-Pulse, is that the country would not be able to feed its people if war were to break out and the U.S. stopped shipping farm goods.

“If that were to happen, the whole food supply – China has got to have food or they’ll have a problem,” an American ag sector source said.

And Xi can’t help but be paying close attention to how Russia’s invasion of Ukraine is faltering.

“Taiwan is not Ukraine,” Glaser said. “If you look at what has taken place in Ukraine, I cannot help but be confident that the Russian experience in war there has induced caution in the mind of Xi Jinping."

Just last week at a summit in Uzbekistan, Russian President Vladimir Putin let on that China is troubled about recent Russian military setbacks. Putin told the press that he understood that China has “questions and concerns” about the war in Ukraine.

Putin was criticized at the same summit by India's prime minister, Narendra Modi, who told the Russian strongman in public, "I know that today’s era is not an era of war, and I have spoken to you on the phone about this.”

Meanwhile, U.S. ag leaders say they are continuing to build up commercial ties with China and focus on positive achievements.

“I don’t think China wants to go down this road, but I don’t know for sure,” one ag leader said. “Nobody does.”