California’s workplace regulator plans to once again extend a COVID-19 regulation. Agriculture and business groups are contending the decision is not based on accurate data and fails to account for new advancements in the pandemic.

The standards board that governs the Division of Occupational Safety and Health, or Cal/OSHA, first adopted an emergency regulation in November 2020. The third iteration of the standard expires at the end of this year.

The board last month released a draft proposal for a semi-permanent rule for public comment and plans to approve it in December. Under the plan, the COVID-19 requirements would expire at the end of 2024, while provisions for recordkeeping on cases, notifications and other information would end the following year.

Employers would have to detail their COVID-19 protocols in their existing injury and illness prevention plans. Companies would still report cases and outbreaks to local public health departments and keep updated records on the cases. They would additionally track all close contacts and keep those records on file for two years. Employers, however, may see some flexibility for notifying workers in close contact with an infected colleague.

In an alert to its members, the Western Agricultural Processors Association described the proposal as “complicated at best, with requirements that contradict each other” and called it unnecessary. An agricultural coalition has been arguing that employers have controlled outbreaks through masking, barriers and distancing, and that most spikes in infections arise from social gatherings outside the workplace. 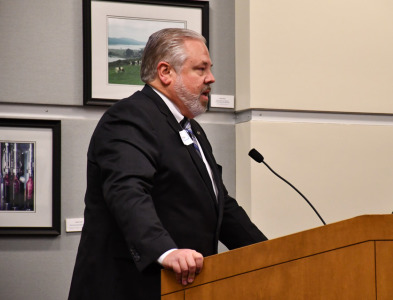 During a hearing on the proposal last month, Michael Miiller, who directs government relations for the California Association of Winegrape Growers, argued the division has not supplied any data to support the need for continuing the regulation.

“There's no excuse anymore for ignoring a lack of data,” said Miiller.

Maintaining protections, he added, contradicts statements from President Joe Biden and Gov. Gavin Newsom that the pandemic has subsided, as well as the latest advice from the Centers for Disease Control and Prevention and the California Department of Public Health.

“We are very concerned that the regulation would punish California employees for a job well done,” said Miiller. “This regulation lacks the reward to Californians who have gotten the shot and done the responsible thing.”

He pushed for sunsetting the regulation in one year, rather than two. Newsom, for example, signed a bill into law last week that extends for one additional year the state’s requirements for notifications and reporting of workplace exposures.

Building on Miiller’s arguments, Bryan Little, director of labor affairs for the California Farm Bureau, said even revising the current emergency regulations every six months has not been fast enough to keep up with the rapidly changing science.

Little worried about the definition of close contacts in the regulation. A large packing shed with no floor-to-ceiling walls, for instance, would mean that dozens of employees are close contacts if a single infected person visited the facility just once, even with barriers in place and social distancing.

Despite many exposures emanating from social gatherings, Cal/OSHA Chief Jeff Killip defended the need for continuing the regulation. Transmissions often spread between the workplace and communities and the state has no way of separating the two, he reasoned. Killip also noted that vaccines do not provide sufficient protection against transmissions or the lingering symptoms known as long Covid.

“It's imperative to keep key worker protections in place as COVID-19 and its emerging variants continue to be a serious occupational and community hazard,” he said

The greatest source of contention in the proposal was that it dropped a requirement for employers to provide exclusion pay to employees who must stay home due to an exposure. While agriculture applauded the removal of exclusion pay, Mitch Steiger, a legislative advocate for the California Labor Federation, AFL-CIO, described it as the biggest weakness in the proposal, arguing the move would punish workers for getting sick. Steiger reminded board members that sickness is still an issue, with long Covid affecting most people who are exposed and posing serious health risks.

“This virus can always change,” he said. “It is not endemic. Endemic means that things have stabilized. We are far from having stabilized.”

Anne Katten, a policy advocate for the California Rural Legal Assistance Foundation, added that COVID-19 continues to be a challenge in rural regions, with increases in infection rates in several Central Valley counties.

“Agricultural workers remain at high risk of exposure and infection in crowded employer-provided housing and during very long van and bus rides to worksites at distant locations,” said Katten, who argued that H-2A guestworkers are especially vulnerable. “The regulation should continue to apply broadly to all employer-provided transportation.”

Siding with labor advocates, several board members pushed the division to revive exclusion pay in the final draft of the regulation.

“Our responsibility is to try to protect all workers, including the most vulnerable and low-wage workers,” said board member Laura Stock, a UC Berkeley public health researcher. “This is going to—once again—be asking them to bear the disproportionate impact of this pandemic.”

Board Chairman David Thomas, who leads a construction union, viewed exclusion pay as essential for the regulation to work.

But Cal/OSHA Deputy Chief Eric Berg said that changing the quarantine rules for exposed workers means that fewer workers are taking sick leave than in 2020, when the division first implemented the emergency regulation.

“Today most workers are no longer required to be excluded after a close contact, as long as they are asymptomatic and test within three to five days after exposure,” said Berg.

Another occupational health consultant on the board, UC San Francisco Professor Emeritus Barbara Burgel denounced the CDC and local and state health departments for loosening guidance on the coronavirus. She called it shocking to lessen protections, especially for transportation, and complained that it shifts a public health problem to the shoulders of individuals.

But Kate Crawford, a management representative on the board, agreed with industry in questioning the value of extending the regulation another two years without an exit strategy.

“I'm simply not convinced of the necessity of this,” said Crawford. “I'd like the division to go back and completely consider the true impact of their decisions and what they're proposing.”