Agriculture has played a prominent role at the United Nations climate conference, where a broad range of companies, groups and governments have been discussing issues ranging from reparations for climate damage to the ways livestock contribute to and could mitigate the problem.

For the USDA, it was an opportunity to showcase $368 billion in climate spending in the Inflation Reduction Act, including about $20 billion in ag-specific funding, as well as the department’s Partnerships for Climate-Smart Commodities program.

USDA said Saturday it had increased spending under the climate-smart program by $300 million, to $3.1 million thus far, by adding about 65 smaller projects to the 70 already funded.

“There's a recognition that agriculture — in the United States for sure, but generally across the board — is really beginning … to take this issue in a very serious way, and taking steps and investing resources, both private and public, to figure out precisely how best to approach being climate-smart,” Ag Secretary Tom Vilsack told reporters.

With the Conference of the Parties (COP 27) scheduled to continue until Sunday, Vilsack said, “We have to wait and see how these negotiations ultimately conclude. But I am very confident that we are headed (to) a place where agriculture is going to be more than a line or a sentence in a very long document.”

Ernie Shea, president of the nonprofit Solutions from the Land, was in Egypt with about a dozen SfL members who led panels and spoke to participants, bringing a farmer-focused message. 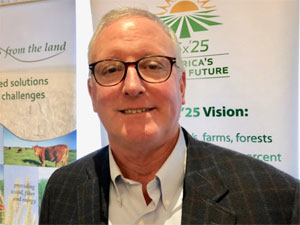 Ernie Shea, Solutions from the Land

“We were there to remind the world that the agriculture sector currently can achieve food security, nutrition goals, climate goals, biodiversity goals and water quality goals” if farmers are at the center of the discussions, said Shea, who has been attending COPs since 2009. “So that's kind of our script over and over, and it's taking root, which is really encouraging.”

Shea, however, said the COP had been “sidetracked” by discussions about climate reparations — that is, whether developed countries should pay developing countries for damages from climate change, including the harm to crop production from droughts and extreme weather.

Developing countries succeeded in getting the loss and damage issue on the agenda for the COP, but there is no consensus on how to move forward. President Joe Biden has pledged $11.4 billion for poorer nations, both for cleaner energy and climate adaptation. So far, the U.S. has come up with just $1 billion.

Representatives from Solutions from the Land conveyed the message that “there is no silver bullet” in ag to address climate change. At COP, SfL met with other farmers at the conference every morning and encouraged them “to advocate for all forms, sizes and methods of food production.”

SfL also emphasized “the critical role of livestock in the global food system," according to their website.

A report released Tuesday slammed 15 multinational meat and dairy companies for their alleged lack of action on climate change.

“The methane emissions of the big meat and dairy companies rival those of nation states, yet they hide their colossal climate footprint behind a veneer of greenwash and net zero targets,” said Shefali Sharma, European Director of the Institute for Agriculture and Trade Policy. “These companies won’t do what is needed voluntarily — governments must set rules to regulate their emissions and support farmers to transition away from industrial agriculture.”

Shea, however, said livestock can be part of the solution, particularly when one considers the importance of nutrition throughout the developing world.

“Animals with proper sustainable grazing can be managing rangelands in a way that improves the health of the grasses, the diversity of the grass of forages, and produces a production platform that takes a nonedible plant material and turns it into a high-quality protein that people can eat,” Shea said.

At the same time, properly managed grazing system have the potential to act as a powerful carbon sink, he said.

Shea said he was encouraged by the increase at COP27 in representatives from the animal ag industry, including the North American Meat Institute and U.S. Dairy Export Council.

Eric Mittenthal, chief strategy officer at NAMI, said the group attended COP for the first time to emphasize what the industry is doing to address climate change as well as the nutritional benefits of meat.

“We wanted to make sure that the commitments or the progress that we're making gets recognized in those discussions, so that animal protein can be a positive solution for healthy people in a healthy planet,” he said.

Mittenthal also disputed the characterization of industry progress as summarized in the IATP report, which said most of the companies examined are failing to track their supply chain, or Scope 3, GHG emissions.

In recent data collected by NAMI, the group found that “more than 80% of the facilities covered in our data collection, which includes all 15 of our largest companies, do track and have goals for their Scope 3 emissions,” Mittenthal said.

For his part, Vilsack said, as he has in the past, that he does not believe people will have to eat less meat to achieve the U.S. goals of reducing methane by 30% below 2020 levels by 2030.

“Let's remind everyone that methane production isn't just agriculture,” he said Monday. “It is a lot of what goes on in our world today from industry, as well as food waste that ends up in landfills, that creates a significant amount of methane.”

He also brought up protein, saying that with a growing world population, “there’s going to be a need, frankly, for a variety of ways in which that protein will be provided to people, livestock being one way, but not the only way. And I think we're going to continue to see continued efforts to make the livestock portion more sustainable, and look at other ways to produce the necessary protein to make sure that the hungry world gets fed.”

The latest EPA report on greenhouse gases and sinks found that in 2020, agriculture contributed about 10% of U.S. GHG emissions. The sector’s methane emissions, which have increased since 1990, made up about 42% of that 10%.

Enteric fermentation from ruminants accounted for about 3.3% of total U.S. emissions, according to EPA.