Rep. Glenn Thompson, who’s set to chair the House Agriculture Committee under GOP control of the chamber, plans to hit the ground running with farm bill hearings next year with a goal of having the legislation out of the House by July.

Thompson also says there are no “pre-drawn conclusions” that Republicans will try to use the measure to cut nutrition assistance programs.

“We just need the farm bill to be done on time and in an effective manner,” the Pennsylvania Republican said in an interview off the House chamber as lawmakers returned for their lame duck session.

“The best bills, the ones that pass and last and are not repealed, are the ones here that are done in a bipartisan manner. … That’s my goal,” he said.

On Wednesday, Republicans secured control of the House, having won at least 218 seats needed for a majority in the chamber, according to The Associated Press.

Even if Republicans pick up additional seats as the vote counting continues, the GOP majority will be razor-thin, which means that a handful of hard-line conservatives or moderates could easily block passage of bills. A couple of ill-timed illnesses, resignations or deaths in the majority party could prevent a partisan bill from going forward, too.

Republicans would have the smallest margin a majority party has had for passing a farm bill, since the 107th Congress in 2001-2002, when the GOP majority had as few as 219 members.

Farm bills failed on the House floor in 2013 and again in 2018 because of revolts by Democrats over SNAP cuts combined with divisions among Republicans in the case of the 2018 measure.

In both cases, the SNAP cuts didn’t make it past the Senate Agriculture Committee, and they would have little chance of getting by that panel in 2023 or 2024, either, since Debbie Stabenow is in line to remain the committee chair.

Since passage of the 2018 bill, SNAP has ballooned in cost, both because of pandemic-related increases in benefits and an update to the formula known as the Thrifty Food Plan that is used to determine benefit levels. The update was authorized by that law as a result of Stabenow’s influence.

A senior Republican on the House Ag Committee, Austin Scott of Georgia, tells Agri-Pulse the narrow margins in the House in the next Congress will likely rule out making large changes in policy, including to nutrition programs.

“It means that we have to do a lot of small things and probably don't end up with any big changes,” Scott said.

As for SNAP, “I don't think you can get a bill out of the House that has significant changes to nutrition,” he said. “I do not think that you will see a significant reduction in the total amount of dollars going into the food benefit.”

Scott would like to see a discussion about restrictions on the use of SNAP for unhealthful foods. In the past, however, that idea has run into opposition from nutrition groups and the food industry. 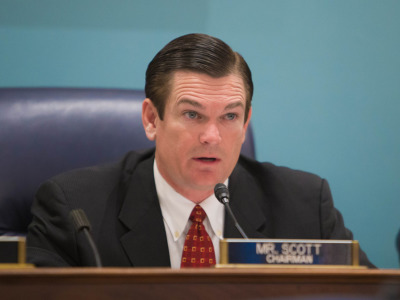 Meanwhile, Thompson said the committee needed to look at increasing the reference prices that trigger payments under commodity programs for row crops. The American Farm Bureau Federation threw its support behind increasing reference prices, although it’s not clear how that would be funded.

“Reference prices are irrelevant with this record high inflation,” Thompson said, referring to soaring input costs that cut into farm margins this year. “It’s not how much you bring in or what you get paid, it's what you're left with at the end of the day. That needs to have some consideration going forward.”

Thompson indicated that the farm bill hearing process could start informally with an event at the Pennsylvania Farm Show in Harrisburg, Pa., on Jan. 7. The committee won’t be formally organized until later.

“That would be a great way to kick off a road show, and as I think most people know, that's only about two, two and a half hours north of here by vehicle,” Thompson said of Harrisburg.

Thompson said he’s notifying both members of the committee and lawmakers who may want to get in on it.

Thompson would like to move the farm bill in the House by July, ahead of the long August recess. Programs in the 2023 farm bill start expiring Sept. 30, although commodity programs remain in effect for the commodity marketing year, and the Inflation Reduction Act enacted in August extended authority for conservation programs through fiscal 2031.

The committee has “got to get started on these listening sessions and put the pedal to the metal on the hearings as well,” Thompson said.

Thompson has already laid the groundwork for providing some oversight of USDA, although he was not clear what his timetable will be.

In September, the Ag Committee Republicans sent a letter to Agriculture Secretary Tom Vilsack demanding documents behind several administration actions, including the use of the Commodity Credit Corp. to fund climate-smart commodity projects.

“We remain concerned that a variety of USDA’s recent and pending actions rely on specious statutory interpretation to achieve political goals well beyond congressional intent. From repeated abuses of the Commodity Credit Corporation Charter Act (Charter Act) to controversial livestock and poultry marketing reforms, the potential effects of these actions are far-reaching and of enormous economic significance to our nation’s farmers, ranchers, foresters, and consumers,” the letter says.

The $3.5 billion earmarked for the Partnerships for Climate-Smart Commodities project “unilaterally siphoned away from legitimate uses under the Charter Act such as addressing immediate market disruptions currently facing America's producers,” the letter said.