A new deal between an ag equipment giant and the nation's largest farm group offers an update to the nation's “right to repair” discourse, but some wonder if the text has the necessary teeth to truly make a difference for producers.

Deere and the American Farm Bureau Federation signed an MOU earlier this week on how the two entities will approach the conversation. The agreement mostly conforms to commitments the farm equipment manufacturing giant has previously made, while proposing boundaries on Farm Bureau affiliates' lobbying efforts and requiring regular meetings between the two entities to discuss progress.

The Memorandum of Understanding is the result of two years of negotiations between AFBF and Deere, according to Sam Kieffer, an AFBF vice president of public policy. Kieffer said state-level delegates adopted policy language in 2020 directing AFBF to engage in negotiations with equipment manufacturers, but discussions with Deere did not begin until 2021.

The agreement charges Deere with making tools, software and documentation available “on fair and reasonable terms” to producers, while also ordering equipment owners not to modify protective measures, illegally infringe on copyrighted software and ensure the equipment complies with federal and state emissions control requirements.

Most of the commitments Deere made, however, were already policies in place at the company. Deere’s Customer Service ADVISOR, which provides access to manuals and connects to machines with an Electronic Data Link, was made available to customers and independent repair shops in March 2022. At that time, the company promised to roll out an “enhanced customer solution” in 2023 that would allow producers to download software updates to embedded controllers on certain pieces of equipment. 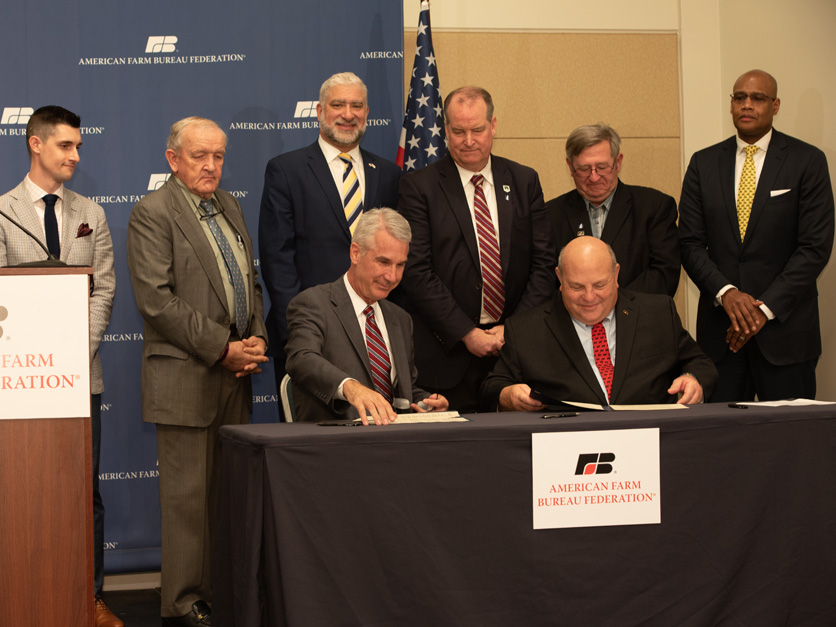 “The intent of the MOU is actually to formalize the tools of offerings that we provide to our customers today,” Collis Jones, Deere’s vice president of U.S. public affairs policy and strategy, said at a press conference on Sunday. “As you look across the country, there’s a lot of confusion, a lot of misunderstanding about what we offer. But this formalizes to American Farm Bureau Federation members what those exact offerings are.”

Kieffer told Agri-Pulse the agreement does add some new elements to AFBF’s relationship with Deere, however. It defines the terms “fair” and “reasonable” in discussions over farmers' rights and creates a formal process for Farm Bureau members who are experiencing challenges when it comes to certain repairs.

“This is the beginning of a process, not the end,” Kieffer said. “We will be engaging with Deere multiple times a year to identify new concerns as they emerge and work with them to find solutions for our members.”

Kieffer said AFBF members directed the organization to seek a solution directly with agricultural equipment manufacturers, rather than through political processes. An MOU, he said, allows flexibility for both parties to continue to make changes as concerns are brought up.

Brook Duer, a staff attorney at the Penn State Center for Agricultural and Shale Law, told Agri-Pulse it’s quite possible the agreement could be seen as an “enforceable contract” if a court dispute ever were to arise. He noted, however, that the agreement allows both parties to exit with a 15-day written notice and their obligations do not survive after one party withdraws. In essence, once a party backs out, they cannot “breach” the terms of the previous agreement.

While Duer was asked whether the agreement had “legal teeth,” he said he believed it had “relationship teeth.”

“This could really spoil the relationship between the two entities should somebody pull out in a way and withdraw from it in a way that seems rash or seems to be defeating what everyone thought they were getting into here,” Duer said.

AFBF, in the MOU, also agreed to “encourage” state Farm Bureau organizations not to introduce, promote, or support federal or state “Right to Repair” legislation outside of what is included in the agreement. State affiliates are not prohibited from doing so, however, according to Andy Friedman, senior counsel for AFBF.

“The 50 state Farm Bureaus and the Puerto Rico Farm Bureau are the folks for whom I work and we are not in a position to tell them what to do,” Friedman said. “So that’s why the language of the MOU reads the way it does. The state farm bureaus are encouraged, they are not restricted in any way shape, or form from taking action at the state level.”

Eric Wareham, the vice president of government affairs for the North American Equipment Dealers Association, told Agri-Pulse that equipment dealers are supportive of the MOU since it builds on a previous “voluntary industry commitment” made by manufacturers and dealers and provides a “market-driven, private solution.” Legislative mandates can often “restrict innovation,” he said.

“This is a real positive step in the right direction to make sure to keep us accountable and make sure we’re living up to our promises,” Wareham said.

But some worry the MOU doesn't go far enough. 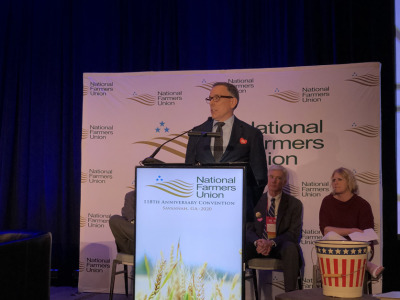 “I don’t really see where they clearly defined my right to repair,” Schweitzer told Agri-Pulse. “They’ve really done a good job of defining my ability to diagnose.”

Schweitzer said a farmer who diagnoses a bad sensor needs to purchase a new sensor and then pair it with the onboard computer. But he said he didn't notice anything in the MOU allowing for that.

“I don’t believe that this MOU is defining the access to do that,” Schweitzer said. “If they are, it’s pretty subtle and vague.”

Deere has been the subject of at least 12 lawsuits claiming the company violated antitrust laws by restricting access to software embedded in its machines, as well as a Federal Trade Commission complaint. The petitioners in the FTC complaint — which include the National Farmers Union, the U.S. Public Interest Research Group, the Digital Right to Repair Coalition, and iFixit — claimed last March that the company violated both the Sherman and the FTC Acts by forcing farmers who buy the company’s equipment to also purchase repair services from Deere technicians.

National Farmers Union President Rob Larew told Agri-Pulse in a statement that his organization needs to learn more about the deal, but is “hopeful” that it will lead to “greater repair access for farmers.” He noted, however, past agreements on the issue have resulted in “little progress.”

“We’ll continue to work with our members and partners to evaluate how this MOU is implemented and we will keep fighting to ensure farmers have complete ability to repair their equipment,” Larew said in the statement.

Landon Friemel, a Texas producer and a member of the Texas Farm Bureau Federation, told Agri-Pulse he thinks the agreement is “wonderful” and provides an opportunity for producers who want the ability to diagnose problems in their machinery, though he said some farmers will still prefer going to a certified dealership to do so.

“I think we need to have every access that a mechanic would have,” Friemel said. “You’re not going to be able to edit the software and I get that, but if you could get into the software so you could figure out what’s going on, then there you go.”