WASHINGTON, Feb. 15, 2017 - Cotton growers are redoubling their efforts to get new federal assistance approved by Congress or the Trump administration before lawmakers start writing the next farm bill. The urgency is driven by the industry’s need to have its own stream of funding, known as “baseline,” already in law as the new farm bill is being drafted.

If cotton doesn’t have that baseline, the House and Senate Agriculture committees will have to carve out money for cotton subsidies from other programs, a prospect that could pit cotton growers against producers of other commodities.

“You’ve got to go take it from someone else. Who are you going to take it from?” asked Bob Young, the American Farm Bureau Federation’s chief economist and deputy executive director of public policy.

Mike Tate, president of the American Cotton Producers, part of the National Cotton Council, said the industry hopes to get a legislative fix in a spending bill this year and also would be pursuing the request with President Trump’s nominee for agriculture secretary, former Georgia Gov. Sonny Perdue. “We need something that’s a safety net for our growers,” said Tate, an Alabama farmer.

When the 2014 farm bill was written, the industry agreed to the creation of a revenue insurance program, the Stacked Income Protection Plan (STAX), in lieu of participating in either of the two new Title I commodity programs the bill created: Agriculture Risk Coverage (ARC) and Price Loss Coverage (PLC). At the time, cotton prices were averaging around 90 cents a pound. But as China ended a policy of stockpiling cotton, prices plunged to new lower levels where STAX has provided little prospect of paying off, so the industry is eager to get into PLC.

The STAX program as originally envisioned would have included a reference price, but that was ultimately removed out of fear that it would invite another World Trade Organization (WTO) challenge from Brazil.

In 2015, the industry appealed to then-Agriculture Secretary Tom Vilsack to make cottonseed eligible for PLC at the farm bill’s reference price for “other oilseeds” of 20.15 cents per pound, or $403 per ton. Vilsack declined to act, saying he lacked the necessary authority under the farm bill. Had he done so, cotton would have had a very large baseline in the farm bill.

With cotton seed prices ranging around 10 cents a pound, or $200 a ton, the PLC payments could have reached $1 billion a year.

The industry then decided to scale back its proposal in hopes of getting Congress to write it into a year-end spending bill in December. The revised plan, which cut the cost to about $1 billion over 10 years, or $100 million a year, created a special reference price for cottonseed closer to $300 a ton and offset much of the cost, in part by saying producers couldn’t participate in both PLC and STAX, sources say. The plan also saved money by assuming that the PLC cotton payments would replace subsidies producers would have received for peanuts and other commodities.

The proposal ultimately went for naught, because Republicans decided in December not to finish the fiscal 2017 spending legislation until April. Congress instead passed a continuing resolution in December that was free of policy riders. The industry is trying once more to get the proposal enacted, but it will have to be modified once again. Since last year, the plan’s projected cost has gone up. Cottonseed price estimates have fallen, raising the size of the potential PLC payments, and the estimated value of the offsets has dropped as well.

“We’ve got to go back to the drawing board and figure out how we can get” the cost down, said Tate. “We had it there.” 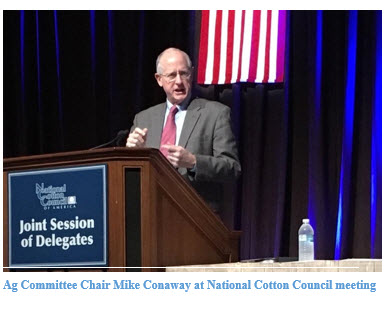 House Agriculture Chairman Mike Conaway, R-Texas, assured the National Cotton Council at its annual meeting in Dallas Feb. 11 that he was “committed, driven quite frankly,” to getting cotton covered under PLC, either through the new farm bill or before.

He would obviously like to do it earlier, since it would make it easier to address demands for increased spending in the next farm bill from dairy producers and others. “All options are on the table,”

Conaway said, noting that he recently discussed the issue with the new chairman of the House Appropriations Committee, Rodney Frelinghuysen, R-N.J. (Conaway didn’t disclose any details of the meeting.)

GOP leaders had planned to pass an omnibus spending bill by April in order to fund the government through the rest of the current fiscal year that ends Sept. 30. That legislation would provide a possible vehicle for the cotton proposal. However, it appears increasingly likely that Congress may instead pass another continuing resolution that would likely have only a minimal number of policy provisions.

The chairman of the Senate Agriculture Appropriations Subcommittee, John Hoeven, R-N.D., tells Agri-Pulse he is open to looking at the industry proposal. “Clearly, we’re going to use this year to set up passing a farm bill next year. So, those are the kinds of considerations we’re going to go through and evaluate. We would have to evaluate what their argument is, how it would work, and how it would fit overall,” he said.

Another option for the industry is getting the Trump administration to do what Vilsack wouldn’t – make cottonseed eligible for PLC as an “other oilseed.” But that may be as long a shot as it was before. Although Perdue represents a major cotton-producing state, any decision on the cottonseed payments would likely need approval from the incoming director of the Office of Management and Budget, and Trump’s nominee for that post, Rep. Mick Mulvaney, R-S.C., is a known budget hawk.

One question is whether other farm groups will join ranks behind the cotton growers’ revised request to Congress to avoid a fight over funding in the farm bill. “The pressure is not going to go away, one way or another,” a congressional source said.

Cotton growers argue that they need the help to survive the impact of China’s shifting policy. China, which is auctioning off its cotton stockpile, is expected to have 48 million bales on hand at the end of the 2016-17 marketing year, July 31, down from 67 million bales at the beginning of the 2015-16 marketing year.

The price of cotton fiber has risen modestly in recent months, but the price of cottonseed, which is used for cattle feed, has remained down. The Congressional Budget Office, which in January started forecasting estimates of cottonseed prices, expects them to average $187 a ton this year, down from $227 a ton in 2015.

The industry hasn’t ruled out seeking PLC coverage for cotton fiber, rather than cottonseed. But it’s thought, said Tate, that subsidizing the seed would be easier to defend at the WTO. Carl Zulauf, an economist at Ohio State University, said the cottonseed payments could potentially be challenged at the WTO as well. The cotton industry has more immediate concerns because of its heavy reliance on trade and uncertainty about Trump’s policy. Seventy-five percent of U.S. cotton is shipped overseas.

Competition from other cotton-producing countries is expected to reduce U.S. exports and market share this year. For example, India, which ranks second in global cotton production, sharply reduced exports last year but could be back in the market this year.

Asked about the possibility of a WTO challenge to cotton PLC payments, Tate said, “We don’t know the answer to that. The better question is, where are our producers at this point? We’ve been through several years of low prices. The cotton industry depends greatly upon exports. We’re not sure where we’re going to go as a country as far as trade relations go.”