Whole-farm policies start to catch on

WASHINGTON, Mar. 1, 2017 - As Congress prepares to write a new farm bill, the new Whole Farm Revenue Protection (WFRP) policies that USDA is offering under a pilot program authorized by the 2014 farm law are showing signs of catching on with the diversified farms they were designed to serve. 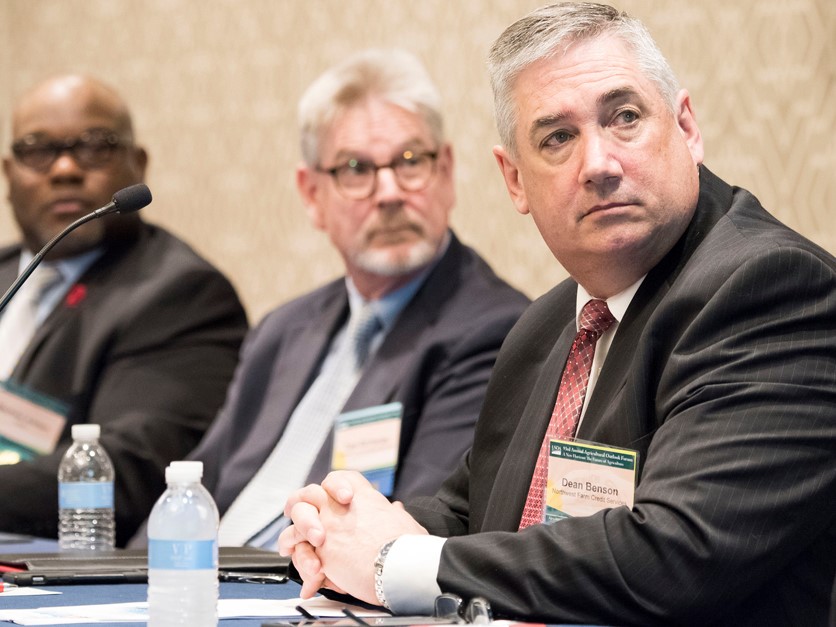 In 2015, 80 percent of the policies were sold in just three states – Washington, Oregon and Idaho. Last year, those states’ share fell to about half as the policies started to gain in popularity elsewhere.

There were counties with at least $5 million worth of policies sold in California, and sales were scattered across the country from Arizona to Delaware.

“This program is going to work and work for a long time,” said Dean Benson, senior vice president of insurance services at Northwest Farm Credit Services in Sunnyside, Washington, speaking at USDA’s recent Agricultural Outlook Forum. He believes the policies will attract new interest from farmers such as wheat and barley growers who don’t feel traditional insurance compensates them for quality losses.

But whole farm policies are still a relative drop in the bucket compared to more conventional policies. Farmer nationwide bought 1.5 million conventional revenue protection policies in 2016 with $68 billion in liabilities.

It’s unclear how much the program will grow this year, since sales don’t close until March 15. As of this week, just 693 policies had been purchased, but that is ahead of last year’s pace at this point, when 525 policies had been sold. The program, which is available to farms with revenue up to $8.5 million, is designed to benefit small-scale farms and other highly diversified operations that may not have benefited from traditional products. Benson said that Pacific Northwest growers are buying WFRP as an umbrella policy to go along with the traditional multi-peril insurance policies that protect against crop losses.

WFRP policies allow farms to protect against the loss of insured revenue from commodities they produce as well as ones they buy for resale. Eighty percent of the annual premium is subsidized by taxpayers as long as the farm grows at least two crops. WFRP subsidies last year cost USDA $84.5 million.

Farmers can purchase coverage levels from 50 percent to 85 percent. Claims are paid after the farm pays taxes for the insurance year and revenue falls below the insured levels. Livestock can be included in WFRP coverage, but farms can have no more than $1 million in revenue from animals and animal products.

Farms have to prove their revenue history by turning over their tax returns for the five previous years, or three years for beginning farmers. So far, Benson said he’s seen no resistance among producers to providing USDA with their tax returns.

WFRP policies were designed to improve on Adjusted Gross Revenue (AGR) policies that had lower coverage levels and premium subsidies and never really caught on with farmers, the National Sustainable Agriculture Coalition says.

According to NSAC, WFRP policies can benefit smaller farms with a variety of crops for which traditional insurance often isn’t available. Paul Wolfe, senior policy director for the group, says the USDA’s Risk Management Agency has made a number of changes that have made the policies more beneficial, including reducing the revenue history required and removing a 35-percent cap on the amount of insured revenue from livestock.

“We still hear from farmers and agents that the amount of reporting required and the paperwork requirements are barriers,” Wolfe said. Beginning farmers also face challenges in adequately insuring their revenue when they are expanding. There is an indexing procedure for increasing insured revenue amounts.