Hundreds of anti-hunger activists will be on Capitol Hill lobbying lawmakers not to cut the food stamp program when the Congress writes a new farm bill. The activists, representing charities, food banks and other groups, will be having breakfast with leaders of the Senate Agriculture Committee before fanning out to meet with members of Congress and their aides.

The activists are concerned about Republican proposals to turn the program over to the states or to impose new work requirements and purchase requirements. Lawmakers will also be asked to consider using the farm bill to increase benefits and soften the time limits on unemployed adults who are having trouble finding work.

But researchers who spoke to the activists yesterday at the annual National Anti-Hunger Policy Conference said that the results of the 1996 welfare reform law show that that block-granting SNAP would essentially gut the program. If SNAP is no longer seen as a federal responsibility, “there’s no way during bad economic times that Congress will say that our first priority is to increase food security,” said University of Illinois economist Craig Gundersen.

Be sure and read the latest in our seven-part Farm Bill series: “Lesson #4: Linking farm, food programs is crucial to farm bill success.”

USDA says it has contained the high-path bird flu outbreak. The outbreak of highly pathogenic bird flu detected at a Tennessee broiler breeding farm on Thursday has been completely contained and is not expected to spread, according to USDA Chief Veterinarian Jack Shere.

The virus was only found in one of eight barns on the Tennessee farm, but all eight barns were depopulated just to be safe, Shere said in an audio posting on USDA’s web site.

Officials from USDA’s Animal and Plant Health Inspection Service have fanned out and are testing birds at all poultry operations within a 10-mile radius of the farm where the virus was found, Shere said.

“There’s no evidence based on the commercial flocks that have been tested … of any spread at this time,” Shere said. 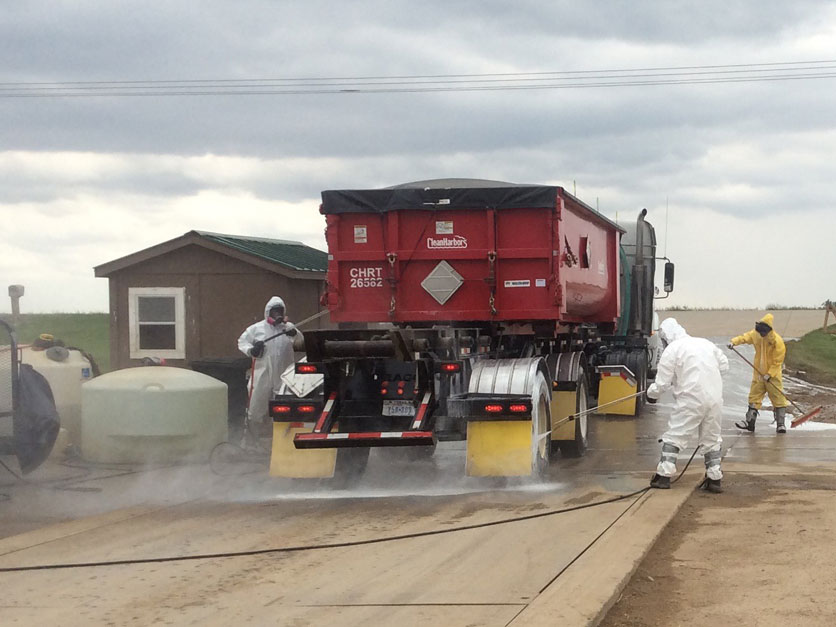 A truck is disinfected during Iowa's 2015 outbreak of avian flu. (USDA photo)

Spain could profit off of U.S. bird flu outbreak. The only country so far to initiate a nationwide ban on U.S. poultry and eggs because of the Tennessee outbreak is South Korea. That’s likely to hurt South Korea more than the U.S. because South Korea is struggling with its own bird flu problem.

There’s a shortage of eggs in the country and it needs the eggs it has been buying from the U.S.

That’s where Spain is expected to step in, according to a newly released report by USDA’s Foreign Agriculture Service.

Spain has been rushing egg shipments to South Korea in an effort to secure some of that market against competition with U.S. exporters, said the report that was compiled before the outbreak in Tennessee and before South Korea banned U.S. poultry and eggs on Sunday.

Now that there’s less competition, Spain should be able to sell a lot more eggs than it had planned on.

“Spanish egg producers that are already sending product to South Korea are also aware that this is a temporary market, similar to the U.S. situation in 2015, as they have experienced the quick recovery of U.S. production capabilities,” the report said.

“While the Trump Administration has announced changes to its previous travel executive order, we remain concerned about the negative impacts any Executive Order may have on our economy and American small businesses,” NRA Executive Vice President Cicely Simpson said. “The National Restaurant Association has always advocated for stronger border security and enforcement measures that keep Americans safe.  However, we must balance our safety and security with the importance of the economic contributions of travel and tourism to our country as we are already seeing negative effects the previous Executive Order is having on our economy.”

Trump signed the new measure after the previous effort became hung up in the courts. This reworked version freezes visas for Iran, Syria, Somalia, Sudan, Yemen and Libya and temporarily stops the U.S. refugee program. Unlike the previous executive order, this one does not bar new visas for Iraqis.

Phil Brasher contributed to this story.