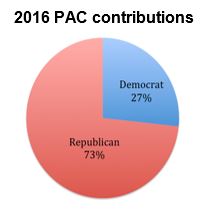 According to Federal Election Commission filings compiled by the Center for Responsive Politics and analyzed by Agri-Pulse, ag and rural PACs gave about $28.6 million to federal election candidates in the 2016 election cycle. Almost $21 million of that – about 73 percent – was given to Republican candidates, dwarfing the $7.6 million in contributions to Democrats.

This analysis is based on examination of 9,811 contributions to 652 House, Senate, and presidential candidates from 287 PACs throughout the course of the 2016 election cycle. In a campaign season marked by unprecedented tactics and rhetoric across a number of races, 2016 contributions followed much the same line as in previous elections. 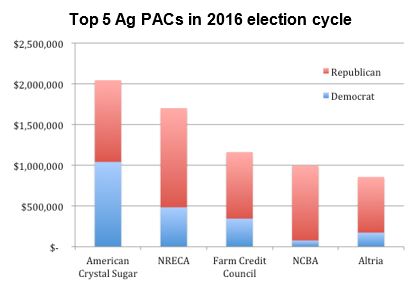 “It’s really just about trying to help people that are of similar mind who are trying to fund their political campaign,” a D.C-based ag lobbyist told Agri-Pulse.

As we’ve noted in previous reports, American Crystal Sugar is the biggest spender in the ag sector. The PAC spent more than $2 million and was the only agribusiness PAC in the top 20 for overall spending. The National Rural Electric Cooperative Association wasn’t far behind, doling out just over $1.7 million. The Farm Credit Council ($1.16 million), National Cattlemen’s Beef Association ($997,500), and tobacco and wine company Altria ($856,750) round out the rest of 2016’s top five in PAC spending.

Congressional agricultural leaders were understandably the highest recipients of ag PAC money, with Texas Republican Mike Conaway, who chairs the House Agriculture Committee, taking home the most money of anyone on Capitol Hill. Conaway collected just shy of half a million dollars from ag interests in the last election cycle, about $74,000 ahead of the next closest recipient, Rep. Collin Peterson, D-Minn., House Ag’s ranking member, who collected $423,075.

In the upper chamber, where neither the chairman or ranking member of the Senate Ag Committee were up for re-election, PAC dollars flowed to other influential Senators who were. Missouri Republican Roy Blunt, a member of the Senate Ag Appropriations Subcommittee who found himself in a contentious reelection campaign last year, brought home more than $350,000 in ag PAC money, topping every other senator. Kansas Republican Jerry Moran, who was the chair of the Senate Ag Appropriations committee at the time of the election, collected the second most in PAC money.

Senate Ag Committee Chair Pat Roberts, R-Kan., and Debbie Stabenow of Michigan, the panel’s top Democrat, were a ways down on the list – 14th and 15th, respectively – and separated by just over $300 in total contributions. Roberts, who collected $142,389, isn’t up for reelection until 2020 and Stabenow, collecting $142,068, is now in her reelection bid with her current term expiring in 2018. Overall, Senate Ag Committee members received just over $1.9 million in campaign contributions in the last election cycle.

For all their giving to established faces on Capitol Hill, ag PACs took a few gambles in the last cycle, too. Chief among those were Nebraska Democrat Brad Ashford, a House moderate who was the only incumbent Democrat to lose in 2016, and New Hampshire Republican Kelly Ayotte, whose loss in a Senate bid has been partially laid at the feet of an effort to distance herself from Republican presidential nominee Donald Trump. Both received similar amounts of money – Ashford $140,750, Ayotte $134,897 – but were unsuccessful in their reelection bids.

“Sometimes you win, sometimes you lose, and that’s the nature of politics,” a lobbyist told Agri-Pulse. “Politics isn’t a guaranteed sport, so that’s just the way it goes sometimes.”

Aside from Ashford and Ayotte, ag PAC spending was also on the wrong side of victory in a number of other Senate races including:

Many PACs were able to dodge a downturn in the farm economy en route to overall record PAC contributions for the sector. NRECA was one such example, where the group’s PAC raised a record amount of money from a record number of contributors in the last election cycle.

Kirk Johnson, NRECA’s senior vice president of government relations, told Agri-Pulse that the PAC’s average contribution was in the ballpark of $58, with more than half of the PAC’s more than 35,000 donors giving just $25 per year. Other PAC’s have been known to have glitzy auctions at annual gatherings, where even though commodity prices are low, producer leaders of the assembled ag groups still open up their checkbooks to take home anything from an engraved shotgun to a guided tour down Washington, D.C.’s Potomac River.

The money may be stretched, but it’s still there.

What’s more, the same blueprint that has guided ag campaign giving in recent elections will continue to dictate ag campaign spending in the 2018 cycle. Multiple sources told Agri-Pulse that big legislative packages like the upcoming farm bill won’t decide who does and doesn’t receive PAC money. Groups will find their friends and provide help where they see fit.

“The strategy will remain exactly the same going forward,” Johnson said of NRECA’s giving plans. “It’s a nonpartisan political action committee, and we will contribute to candidates of any party who are supporters of electric cooperatives.”

For a complete excel spreadsheet of ag PAC giving in the 2016 election cycle, click here.