US meat industry, Mexico may be on same page in NAFTA talks

WASHINGTON, May 24, 2017 - All signals point to a full-speed-ahead renegotiation of the North American Free Trade Agreement, but the U.S. meat sector is hopeful that the three governments involved will be amenable to the ag sector’s desire, for the most part, to be left alone. 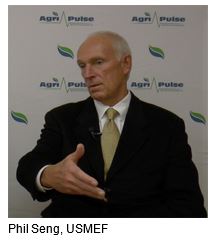 Last week, the U.S. made official its intent to modernize the agreement. Ag groups have been accepting of the administration’s desire to work on NAFTA, so long as the duty-free access many products currently enjoy in Canada and Mexico isn’t affected. Phil Seng, president and CEO of the U.S. Meat Export Federation, told reporters Tuesday that it’s hard to improve upon the zero percent tariffs currently in place on U.S. beef and pork, but the unpredictable nature of trade talks raises concerns.

Offering some words that will perhaps calm the worries of Seng and others, Oscar Ferrara, USMEF’s regional director covering Mexico, noted that there seems to be some agreement in Mexico.

Seng said that USMEF wants to see some kind of language included in future trade talks to say “agriculture will be exempted from any retaliation or any type of actions that would impede the flow of products.” Because, Seng notes, retaliatory tariffs would have the potential to damage the American reputation to foreign buyers of agricultural products.

“When countries cannot be self-sufficient, we’ve always preached you can be food secure with your trust in the United States as a major supplier of agricultural products. When other things enter into the picture that interrupt or disrupt that, that becomes very, very difficult.”