WASHINGTON, May 24, 2017 - American livestock organizations have joined in a plea for Congress to commit three-quarters of a billion dollars in the upcoming farm bill for a five-year plan (see box) to get ready for a foot-and-mouth disease outbreak by vastly expanding USDA’s vaccine stocks.

An obvious question seems to be: “Why not?” 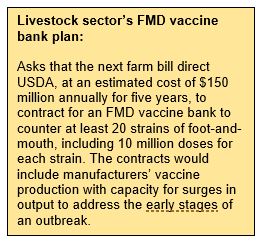 The FMD virus is extremely contagious and infects all types of cloven-hooved domestic livestock and wild species, often killing young animals. When it drifted into the United Kingdom 16 years ago, it spread to more than 2,000 locations, and about 5 million sheep and a million cattle and pigs were culled or died before Britain’s outbreak was arrested.

FMD is endemic in many parts of the world, as close by as northern South America, but the U.S. vaccine readiness to deal with an outbreak is sorely wanting, says Dan Kovich, deputy director of science and technology for the National Pork Producers Council. USDA has limited stocks of antigens against nine FMD serotypes (strains) at its off-shore laboratory on Plum Island, N.Y. In case of a U.S. outbreak, the antigens would have to be shipped to labs in Europe to manufacture vaccine, he explained, and weeks would elapse before enough vaccine could be available to treat even the livestock in a single North Carolina or Iowa swine-producing county.

What’s more, “pretty much all current FMD vaccine production worldwide is spoken for; it’s already being produced for other countries,” Kovich said. “There is no one ready and geared up to produce that vaccine for the United States.” With a vaccine bank, he said, “it is really critical to have enough to start an immediate response.”

Livestock sector support for the FMD vaccine bank isn’t, however, unanimous. Kansas Secretary of Agriculture Jackie McClaskey, whose state’s feedlots hold a million steers and heifers, says, “I fully support a major expenditure through USDA for FMD response. But, from Kansas’ perspective, we think there is a lot more discussion that has to take place” about what is the best path to FMD readiness.

McClaskey says she’s done a lot of homework, including five big animal health emergency-response exercises in the past seven years, learning what has to happen with federal and state agencies and livestock owners when such emergencies erupt. “Vaccination is not a silver-bullet solution, and it is clear to us that culling will remain a major aspect of a response,” she says, even though USDA prefers a vaccine response, avoiding unneeded culling. 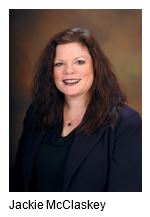 In Kansas alone, McClaskey points out, there are about 8 million FMD-susceptible farm animals, and an outbreak in southwest Kansas would require more than 6.2 million doses in short order to treat all endangered hooved livestock. Thus, the proposed 10 million doses to respond to an outbreak could be quickly overwhelmed. So, she asserts, “a vaccine-based response to an outbreak of FMD in the near future is not realistic. Funding the $150 million for vaccines is a waste of taxpayer dollars if we don’t think realistically about the timing and dissemination process, support other response and culling options, and stop viewing vaccination as the “silver bullet.”

“There is no silver bullet. That is correct,” Kovich says. “We do need to do research into new and better prevention and mitigation techniques, and new vaccine strategies. But we also need to be in a position to deal with an outbreak if it occurs in the near future. We need to at least have a bullet,” he says.

Plus, he notes, “An important piece of the vaccine bank . . . is that not only are we developing the bank, but we are developing the manufacturing capacity. It isn’t the intent that the, say, 10 million doses on hand are going to be sufficient to cover the outbreak. The intent is that those 10 million doses be ready to go quickly . . . to get the initial response kick-started. Time is critical.”

The big FMD vaccine bank “is one of our very top priorities, just because the consequence of not doing it are so huge,” Kovich says.

Rep. Mike Conaway and Sen. Pat Roberts, chairs of the House and Senate agricultural committees, respectively, acknowledged the importance of readiness against FMD and told Agri-Pulse the vaccine bank plan will be considered with other farm bill funding requests. Note, however, that they will be under a lot of pressure within their own chambers and by President Trump to cut farm bill spending severely overall.