MONTANA, July 5, 2017 - The Western Governors’ Association is calling for changes in the Endangered Species Act, including giving the states a bigger role in deciding when animals should be listed for protection, and – just as importantly – when they can be delisted.

The recommendations were contained in a resolution approved last week at the WGA’s annual summer meeting, in Whitefish, Montana. Approval was not unanimous, as Democratic governors Jerry Brown of California and Jay Inslee of Washington, who did not attend the WGA conference, refused to sign on.

Republican Gov. Matt Mead of Wyoming, a former WGA chairman who oversaw the development of the resolution, praised the ESA for the protection it has provided for iconic American animals such as the bald eagle and the grizzly bear. But he noted that the legislation was enacted in 1973 and there was a need for improvements.

Addressing his fellow governors and an audience of hundreds at a middle school theater in Whitefish, Mead said he hopes to “send to Congress a plan that we think can do a better job” protecting endangered animals and “begin a process that will ultimately lead to improvement” of ESA.

But Brown, in a letter to Mead, said this is not the time to ask Congress for changes. “The “current climate in Congress is marked by chaos and partisanship,” Brown wrote, adding, “This climate will not result in good conservation policy.”

The WGA resolution was greeted with alarm by some environmental groups.

“The WGA’s call for legislative changes to the Endangered Species Act opens a Pandora’s box in this hostile Congress,” Jamie Rappaport Clark, president and CEO of Defenders of Wildlife, said in a statement. “Since 2015, Congress has introduced more than 150 bills, amendments and riders that would undermine the ESA and weaken conservation measures for imperiled species. We cannot risk opening the Act to the avalanche of destructive amendments that that would gut our nation’s most effective law for protecting endangered and threatened wildlife.”

Mead, however, said the ESA often has not worked as designed. He said that in the nearly half-century that the law has been in existence, only 1.5 percent of species listed for protection have been delisted, despite evidence that their numbers have recovered.

“We spend tens of millions of dollars on the recovery process and we still can’t get a species delisted,” Mead argued. “In doing so, we are ignoring species that need our help.” 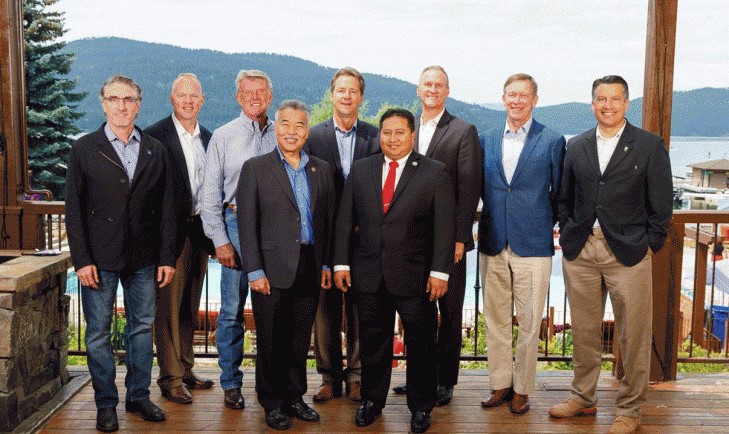 The WGA resolution reads in part: “Given the impact ESA listing decisions have on vital state interests, states should be provided the opportunity to be full partners in administering and implementing the ESA,” including listing and delisting decisions, critical habitat designations, and recovery planning.

The WGA’s three-day meeting concluded with Montana Gov. Steve Bullock, a Democrat who chaired the organization for the previous 12 months, passing the gavel to South Dakota Gov. Dennis Daugaard, a Republican, who will host the 2018 summer meeting in his home state.