The 2018 Senate Agriculture Appropriations Report notes that global food production will have to increase by 60 percent to meet the needs of 9 billion people forecast for 2050. The report then calls upon Secretary Perdue “to take a leadership role in working with other relevant departments and agencies in establishing a Federal interagency task force to meet the food and nutrition challenges of 2050, and to align domestic and global programs related to food production and food and nutrition security to meet these challenges.”

The Senate report was released at the same time the World Food Program (WFP) released its excellent 2017 report on World Food Assistance (WOFA_2017). One of the key findings of WOFA is that “Funding for international food assistance is at record levels, but it’s not enough to meet the needs.”  WFP is the largest and most important food assistance program in the world but demand is outstripping the world’s ability to satisfy the need for food even if all countries meet their pledges to WFP. The poor levels of agriculture performance in many countries have put increased pressure on WFP and humanitarian assistance.

Combining the findings of the two reports, the bottom line is that there must be increased attention on boosting global food production to avoid an even larger crisis than the existing famine which threatens more than 20 million people. The crisis has caught the attention of the National Security Council (NSC) where they are exploring options for a US strategy as part their national security assessment. The focus is on Africa, in particular, because that is ground zero for the famine. Africa (which has 54 sovereign countries) also contains most of the world’s unused and underutilized agriculture land, putting a spotlight on their crop production.

After several recent meetings at the National Security Council it is clear that the NSC recognizes the link between food security, national security, political stability and economic growth both in Africa and here in the United States. The NSC continues to explore the best options for the United States to address this challenge.

Half of those who are hungry in the world are, in fact, smallholder farmers.  The goal must be to help these farmers, who are not even producing enough for their own families, become profitable businesses.  The question is what is the best way for the United States to support agricultural leaders in Africa?

The African Union is urging all countries to devote at least 10 percent of their respective budgets to agriculture.  The African Development Bank has placed a priority on providing capital for agriculture production.  The Alliance for a Green Revolution in Africa, AGRA, is focusing on seed development, improving soils and expanding markets while working with both the private and public sectors. 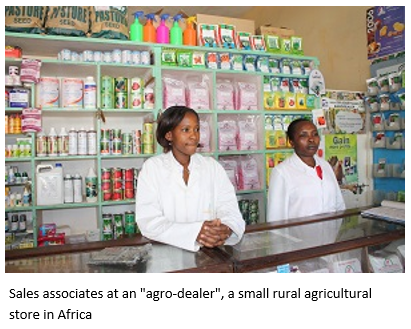 The missing link, to paraphrase Nobel Prize winner and father of the Green Revolution, Norman Borlaug, is “taking it to the farmer.”  Improved seeds, inputs, and education are not reaching the smallholder farms. When they do reach farmers, according to AGRA, yields can triple in just a season or two, as they have in the Southern Highlands of Tanzania. Africa now has 90 seed companies in 18 countries. Locally adopted, high-yielding hybrid crop varieties that respond to the needs of local communities are coming on line. The next big challenge is reaching smallholder farmers who farm just a few acres (one hector is 2.5 acres) in small villages down dirt roads. In short, Africa needs a much more developed distribution system.

Africa currently has some 17,000- 25,000 local, privately owned, rural agriculture stores.  These small stores or “agro-dealers” cater to the needs of smallholder farmers, most of whom are women. The agro-dealers sell small packages of improved hybrid seeds along with small containers of inputs that can be transported back to local farms without a truck or vehicle.  Of the 54 countries in Africa, the focus is on the dozen or 18 countries that are considered a priority (P1 countries) based on their land, access to water, and political stability.

The United States continues to make significant contributions toward ending hunger around the world. If the Trump Administration were to take the lead on one particular link in the food chain, it could make a very significant contribution to food security by helping to expand the number of privately owned agro-dealers in the P1 countries.  An adequate distribution system is the key missing link to African food security.

The use of improved hybrid seeds along with micro doses of inputs, combined with agriculture education, immediately creates a green revolution within the farmer’s community. As mechanization is introduced, yields increase again. The distribution system is not the only important link in the food chain but progress is being made in the other areas; expanding the private sector distribution system is where the United States can make the difference. The other links in the chain are best addressed on the ground in Africa. Africa is moving quickly with the internet and start-of-the-art communication (jumping over phone lines), but the iPhone can’t physically deliver the necessary seeds and inputs.

Expanding the distribution system in Africa is also of interest to U.S. companies anxious to reach smallholder farmers as they represent a significant potential market. If President Trump made this the focus of his attention in Africa, in cooperation with the Africa Development Bank and other stakeholders, it would not only assist smallholder farmers in Africa but it would create jobs in America.

Bringing this back to national security, it is important to note that Africa is the youngest continent in the world with 65 percent of the population below the age of 35 and that number is projected to grow. Less than 15 percent of the youth are employed in any realistic form of employment. That can only breed discontent and trouble. As agriculture becomes a profitable business, it can fill a huge void.