WASHINGTON, Sept. 6, 2017 – The nation’s small meat processors are confronting a new market reality: an increasing demand for healthier local meat options coupled with the often-labyrinthine set of regulations that accompanies it. As a result, some processors in Missouri, Illinois and other parts of the nation’s heartland have changed their model from a slaughter-only facility to one that includes a specialty meat operation and opted for federal certification, allowing them to sell across state lines but increasing the amount of regulatory infrastructure.

Small meat processors, who number approximately 800 nationwide, according to the latest USDA figures, have had to adjust to realities imposed from outside the industry. State authority over inspections, which used to be the reality as little as 10 years ago, is only active in 27 states, as funding has dissipated because of budgetary constraints, said Rebecca Thistlethwaite, manager of the Niche Meat Processors Assistance Network at Oregon State University.

Processors who opt for federal inspections and certifications must adjust to more stringent U.S. Department of Agriculture Food Safety Inspection Service (FSIS) rules. For example, each time that a more natural sausage is made, one that substitutes natural or organic ingredients in place of additives like monosodium glutamate or synthetic nitrites, a new Hazard Analysis and Critical Control Points (HACCP) plan must be written by the processors themselves and approved by FSIS through a series of product tests and revisions. 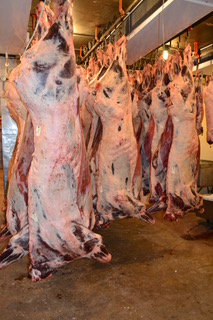 FSIS’s Small Plant Help Desk, started in 2010, connects small meat processors, who generally slaughter between 60 and 200 animals a week, with USDA specialists and seeks to help clarify rules and regulations related to the HACCP plans, though Thistlethwaite says there is much improvement needed in the area of outreach and education.

“The USDA does not provide much advice at all as to how to fill out HACCP plans,” Thistlethwaite said. “You have to have a plan for each product line and some processors may have 30, 40, or 50 of these plans that must be written and continuously updated. Also, if you submit one of the plans to the USDA and it is wrong, they often do not tell you why it is wrong and they are not allowed to provide recommendations.”

A USDA officials pointed to FSIS compliance guides which are available on the agency's website. The guides include instructions for inspectors and information for processors about filling out HACCP plans. Another preferred outreach method for processors is to reach out to local extension offices at land-grant universities.

Tom Eickman of Seward, Illinois-based Eickman’s Processing says that state and federal meat processors associations such as the Illinois Association of Meat Processors and the American Association of Meat Processors have been a very important part of this transition and have helped clarify the often-changing USDA rules for both processors and inspectors. Eickman’s operation consists of both a slaughter facility and a specialty meat operation and butchers about 40 head of cattle, 60 hogs, 10 goats and some exotic species each week.

“In terms of inspection personnel and procedures, I try to keep a good working relationship with them,” Eickman said. “Our collective goal is to provide a safe food product. Instead of having an ‘against each other’ mentality, I like to think that we are in this together.”

Today’s processor is also in tune with new regulations on healthier options in school vending machines. As schools have moved away from allowing candy bars in vending machines, they have been replaced by high-protein meat sticks. 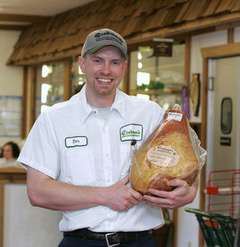 Kevin Western of Western’s Smokehouse in Greentop, Missouri, specializes in making high-quality, healthy meat sticks from the finest area beef. Western cited the increasing demand for these snacks as the key reason for the shift in his company’s business model.

“Our customer base used to consist of northeast Missouri and southern Iowa in a 50-75-mile radius,” Western said. “Now, we deal with customers from all over the United States from California to New York. This has opened the door for us as a business to be able to expand and grow and still maintain a good quality, healthy product.”

Western says that consumer eating patterns among millennials caused his company to think outside of the box. Today’s younger families do not fill up their freezers for six months anymore, as they did 20 years ago, and the demand for slaughtering a whole cow or whole hog is not as it used to be.

Joe Cloud of Virginia-based T and E Meats, also cites this healthy, traceable product demand for an expansion of his processing facilities. T and E’s profit margins have averaged 16 percent since 2009 and customers are booking their cut of meat or specialty item four months in advance. Cloud has been planning an expansion that would increase the processing area by about 2,500 square feet and allow them to do more “value-added” processing of cured hams and bacon. Cloud and his business partner, Joel Salatin of Polyface farms in Virginia, also cite a robust, restaurant-based clientele in the area that helps to drive T and E’s 1.2 million pounds of processed meat per year.

Matt King of Main Street Meat Company in Roscoe, Illinois, and president of the Illinois Association of Meat Processors, says his company has also seen increased demand for and specializes in a prepared product line. He sells marinated, seasoned, pre-made, microwavable meals with high-quality beef to retail locations throughout Northern Illinois and Wisconsin.

“These are high-end TV dinners,” King said. “We have a full-line kitchen staff and put the meat pre-cooked into TV-dinner-type trays and fill them. There are only a total of four or five things in our product line that are not prepared in the case.”

“Today’s consumer is a bit tired of the same old name-brand product and is looking for the higher-quality protein-blended product,” Frickenschmidt said. “We feature meat bars, made from a thick ground and formed beef jerky that has some cranberries and different fruits and other natural ingredients.”

This week’s Open Mic guest is Senate Ag Committee Ranking Member John Boozman. The Arkansas Republican isn’t pleased with the process of budget reconciliation for the Build Back Better Plan now before Congress. Boozman questions not only the sum of funds but the lack of detail in how the agriculture dollars will be used. While stepped-up basis may be preserved with the plan in its current form, Boozman says that can quickly change and says lowering the minimum inheritance tax thresholds could have the same detrimental effect on the transfer of farms and small businesses to the next generation. Labor is still a top issue for agriculture, but he’s doubtful this Congress will embrace the challenge.

Several House committees moved their respective parts of the $3.5 trillion reconciliation bill this week, and the tax language was under the watchful eye of the country's farm groups. In this video, Danielle Beck with the National Cattlemen's Beef Association offers her take on what the bill looks like so far and what she'll be watching as the process continues to unfold.