Partially offsetting today’s low commodity prices, there’s good news for farmers and the U.S. economy: By 2030, the U.S. could triple its use of “readily available non-food biomass resources from our nation’s farms, forests, and waste streams” to produce “transportation fuels, electricity, commercial products, and high-value chemicals.”

That’s the new-major-market hope from USDA, the Department of Energy and five other federal agencies working together to create what they call the “Billion Ton Bioeconomy.” In this vision of a low-carbon future driving job creation and economic growth, biomass production would increase from 360 million tons today to over 1 billion tons. The agencies estimate that this tripling would increase direct revenue five-fold from $48 billion to over $250 billion and lift employment to 1.1 million “jobs that cannot be outsourced” from the current 285,000.

Using broader measures to include “indirect jobs in related industries and induced jobs produced from the purchase of goods and services generated by the direct and indirect jobs,” USDA’s 142-page October 2016 Economic Impact Analysis of the U.S. Biobased Products Industry concludes that “the total contribution of the biobased products industry to the U.S. economy in 2014 was $393 billion in value added and 4.223 million jobs.”

One key to turning bioeconomy hopes into commercial reality is biochemicals. The federal agencies’ Biomass Research and Development Board (BRDB) concluded in its November 2016 Billion Ton Bioeconomy Initiative report that biochemicals, generally, “provide the highest value use of biomass products, and successful technologies can have a positive return on investment, making these more likely to scale-up to commercial production.”

Harry Baumes, director of USDA’s Office of Energy Policy and New Uses, explained in an Agri-Pulse interview that the expectation is for the BRDB to finalize its promised bioeconomy Action Plan by March “aimed at building a national coalition in support of the Bioeconomy Initiative.” He sees greater biomass use providing new options for farmers’ planting decisions, new jobs, new opportunities to create greener products for U.S. markets and for export and economic growth. 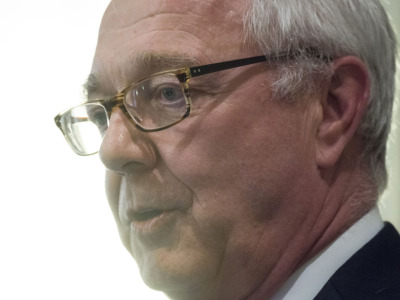 Baumes says the priority is to improve collaboration among government agencies and develop public/private partnerships to attract capital investment for planned biomass projects, explaining that “very broad-based collaboration needs to be in place to move this forward.” Similarly, the BRDB’s Initiative report stressed that “the biobased sector has not received the amount of capital necessary to thrive in today’s markets.”

Pointing to tight petroleum fuel margins, Baumes says “The same is true with biofuels,” so that biorefineries are “looking at other opportunities” to maximize value from biomass. The result, he says, is that biorefiners are pursuing not only biofuels – which will remain their largest market – but also higher-value renewable biochemicals, intermediates, bioplastics, and other biobased products.

Echoing the conclusions of multiple reports, Baumes points out that “the chemicals, the plastics, do offer a higher margin, but they are smaller markets . . . So, we really need the fuel side and we need the bioproduct side.” He predicts that as integrated biorefineries multiply across the country, “they will create more jobs, create more products that are greener for the U.S. marketplace, and create more products for the export markets.”

On the fuels side, Baumes finds that by using biomass not needed for food or fiber, “biofuels potentially could penetrate the motor gasoline, diesel and jet fuel markets and account for between 25 and 30 percent of the fuel market.”

On the bioproducts side, biochemicals jump out as the clear leader as shown in the two charts below from the November 2016 Assessment of the Potential Products and Economic and Environmental Impacts Resulting from a Billion Ton Bioeconomy, which Baumes and six others co-authored.

The illustrative Assessment report finds that prioritizing biochemical production not only would create more jobs and revenue than alternative biomass uses, but would provide the greatest potential for reducing fossil energy consumption and cutting greenhouse gas emissions. 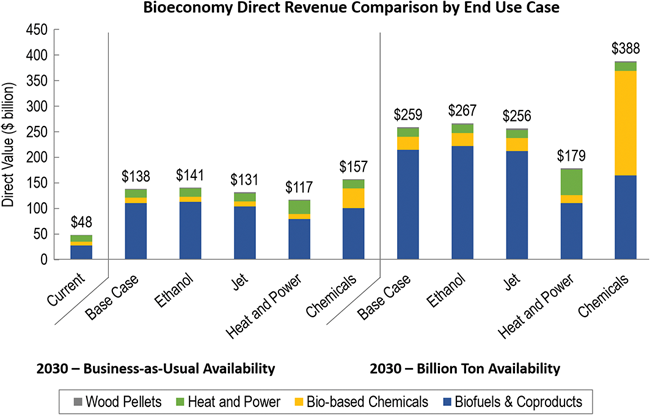 The BRDB Initiative report similarly expects biomass market development from “using ethanol as a precursor for new bioproducts that have a higher value for the production of polymers.” The report adds that “Coupling biofuels and bioproducts development can result in an accelerated timeline to reduce risks versus a fuels scenario alone.”

For details on what’s ahead for biomass, read the 56-page Federal Activities Report on the Bioeconomy published February 2016.