The U.S. will not be backing down from demands that Canada dismantle its dairy supply management system even if the two countries and Mexico fail to renegotiate the North American Free Trade Agreement, according to U.S. government and industry officials.

The U.S. blames Canada’s tightly controlled dairy program, including the controversial Class 7 pricing mechanism, for distorting international markets. The U.S. continues to demand Canada dismantle it as part of the NAFTA renegotiations, but even if that fails, the U.S. is “actively considering” filing a complaint against Canada in the World Trade Organization, a U.S. government official confirmed for Agri-Pulse.

The damage being done to international dairy markets is just too harmful to U.S. farmers, processors and exporters, and the situation will only get worse unless Canada changes its ways, the sources say, some of them speaking on condition of anonymity.

U.S. negotiators and industry would prefer to get an agreement from Canada in the NAFTA talks that could wrap up in March as opposed to a long, drawn-out WTO battle.

Jim Mulhern, president and CEO of the National Milk Producers Federation, tells Agri-Pulse that the upcoming sixth round of NAFTA negotiations in Montreal later this month could be crucial for dairy and the overall negotiations. 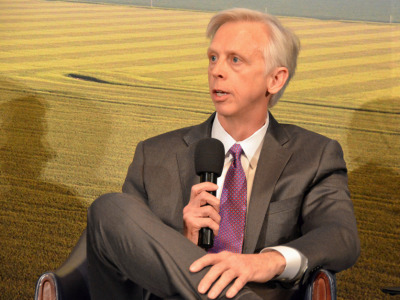 Canada has said generally that it will negotiate dairy, but has yet to respond to the U.S. proposals, Mulhern said.

U.S. government and industry officials say they’ll be relieved if Canada relents in the NAFTA talks, but a WTO case is still an option. They said they'll take a win either way.

“We’re using all the tools available to use,” one U.S. government source said. “We have raised our concerns in the WTO … We’ve asked (the Canadians) to explain themselves – to justify this pernicious distortion they’re imposing on world markets.”

Through its Class 7 pricing mechanism, Canada is both blocking U.S. dairy exports to protect its domestic market while at the same time subsidizing its own exports and stealing market share away from the U.S., said Kenneth Bailey, an economist with Seattle-based dairy cooperative Darigold.

And Bailey, formerly a professor at Penn State University, has given U.S. negotiators new leverage in their battle with Canada. He has concluded in an exhaustive study that the U.S. industry will lose roughly $1 billion over five years as a direct impact on international markets from Canada’s protective system if it is left in place.

The National Milk Producers Federation, the U.S. Dairy Export Council and the International Dairy Foods Association have all touted the importance of the study, which is also circulating at the USDA and the Office of the U.S. Trade Representative.

Canada unveiled the latest component of its nationwide supply management system – Class 7 – in February 2017, after first giving it a limited test run in 2016 in Ontario. The Canadian Dairy Commission, in conjunction with the federal government, was desperate to bulk up domestic butter production because demand was on the rise and so were imports of both butter and protein products. Class 7 allowed the Commission and its provincial affiliates to raise the floor price for milk and spur more domestically-produced butter. The plan worked, but as a result, Canadian processors also produced a lot more non-fat solids (think skim-milk powder).

If all those non-fat solids remained in Canada – and a lot do – the U.S. would not likely be claiming damage from a flooded international market.

But Canada is exporting as much of the dairy protein as possible and at a very low price. Beyond lowering imports of skim milk and butter, Class 7 pushes down the price for the non-fat solids, which forces Canadian cheese makers to replace U.S. imports with local non-fat solids.

This is how it works, according to Bailey: The Canadian Dairy Commission sets the price for non-fat solids by taking the lowest international price and then subtracting estimated costs of processors. For November, that price was the equivalent of about 44 U.S. cents per pound under Class 7. The corresponding price the U.S. processors pay farmers for the same product is about 58 cents per pound.

This has two major results.

First, Canadian cheese makers no longer want as much ultrafiltered milk from the U.S. because they can replace much of it with the sharply discounted Canadian non-fat solids.

US initiates new dairy dispute consultations with Canada
Daybreak July 18: Biden: I won’t back down on climate action
Canada takes hard line on dairy ahead of NAFTA talks

“Overnight it became cheaper to buy non-fat solids in Canada to make cheese then it did buying ultrafiltered milk (from the U.S.),” International Dairy Foods Association President and CEO Michael Dykes said.

"We’re going to stand up for our dairy farmers in Wisconsin," Trump said in a speech in Kenosha.

Ag Secretary Sonny Perdue followed up in June, evoking the WTO. Class 7, he said, is a “very unfair, underhanded circumvention of the WTO” that allows Canadian producers “to over-produce and then to blend-out their high-price milk with low-quality milk solids on the world market.”

In addition, those cheap Canadian non-fat solids are taking U.S. market share in other countries like Mexico.

“If you want to increase your milk production and get your butter rather than import butter from us, do that,” Dykes told Agri-Pulse in an interview. “You keep your non-fat solids too. If you want to trade them, trade them competitively. Don’t put them on the world market and underprice them.”

But that’s exactly what Canada is doing, he said.

Canadian export numbers show U.S. industry fears coming to life. Canada exported roughly $45 million worth of skim milk powder in 2016, according to Canadian government data. In just the first 10 months of 2017 – the latest figures available – Canada exported about $118 million worth.

“The global impacts of Class 7 that have started to unfold throughout last year – and will only get worse if left unchecked—are exactly why we need to seize the opportunity of NAFTA negotiations to address this problem” said the NMPF's Mulhern.

It’s not just the Mexican market that Canada is affecting. The Chinese infant formula company Feihe is spending about $250 million to build a factory in Canada to take advantage of the artificially low-priced skim milk powder it will be able to buy there.

Competing with the Canada-based Feihe plant, which has access to substantially cheaper and government-subsidized skim milk powder, may be impossible, Bailey said.

Feihe, he said, plans on exporting up to 85 percent of its production back to China.

(This story was updated Jan. 4 to correct the description of the Seattle-based dairy co-op Darigold.)