The Ford Motor Company is championing worldwide efforts to use more agricultural resources in cars, trucks and other products. This push to increase the use of sustainable, renewable ag materials echoes Henry Ford’s efforts to build indestructible car bodies from soybean-based bioplastics and his early steering wheels from wheat straw.

So, Ford’s pioneering 1930’s commitment to make as many vehicle components as possible from ag resources rather than from petroleum, has shifted into high gear. Ford today uses eight sustainable ag feedstocks in its production vehicles, including soybeans, wheat, rice, castor, kenaf, tree cellulose, jute and coconut.

But today’s corporate push for using renewables looks unstoppable. One reason is that Ford is working closely with other manufacturers and stakeholders to spark economy-wide use of renewable materials.

Ford Motor Company’s early 2000’s push for replacing petroleum-based seat cushions in its vehicles went public in 2008 when Ford first used soy-based seat cushions in its Mustangs, reducing petroleum-foam use. As a result of this successful substitution, since 2011 every North American-built Ford vehicle has used soy-foam seating. That’s added up to having put more than 18.5 million Ford cars and trucks with soy-based seats on U.S. highways.

Ford continues to research ways to increase the use of ag resources, including using waste agave fibers that otherwise are burned as part of Jose Cuervo’s tequila production operations in Mexico.

Debbie Mielewski, Ford’s senior technical leader for Materials Sustainability, explains that after Ford labs’ years of often frustrating work to commercialize soy-foam, the company is actively researching uses for wheat straw, tomato peel and stems, bamboo, dandelions, and hyper-growth algae. She adds that Ford researchers are “also exploring innovative uses of carbon itself, and are first in the industry to develop foams and plastics using captured carbon dioxide.” 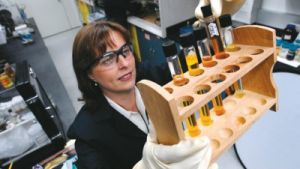 Mielewski says that in this research, “we continue to collaborate with the United Soybean Board to develop soy-based materials for rubber components like gaskets, seals and wiper blades.” USB Director of Biobased Products Mike Erker tells Agri-Pulse that USB’s current work with Ford to use soy-based replacements for under-the-hood rubber components could create a market for millions of bushels of premium-priced high-oleic soybeans.

In a short “Why would you sit on a soybean?” video, and a TEDx presentation, Mielewski explains the compelling combination of economic and environmental reasons for Ford’s bioeconomy research. She notes that despite major challenges in developing soy foam, “In 2008, when oil prices skyrocketed, the value of soy foam became suddenly obvious. Not only was replacing petroleum-based polyol good for the environment, it was good for business.” She adds that Ford’s sustainability goals include “using locally sourced plants and crop waste where we assemble our vehicles, something with the potential to further reduce shipping emissions and provide area farmers with new revenue streams.”

Ford reignited its longtime drive to replace petroleum-based materials with ag materials in 2000. This shift coincided with Ford Executive Chairman Bill Ford launching the company’s annual reports on sustainability issues. In its latest edition, Ford insists that it is committed to “the creation of new markets and revenue opportunities for farmers.” This goal echoes Henry Ford’s 1934 promise that “Someday, you and I will see the day when auto bodies will be grown down on the farm.”

Ford’s 2017 report states that as part of increasingly using plant-based materials “to reduce our carbon footprint and our dependence on petroleum,” Ford is committed to “the creation of new markets and revenue opportunities for farmers.” The report notes that the bio-based materials used for Ford’s F-150 pickups now include: 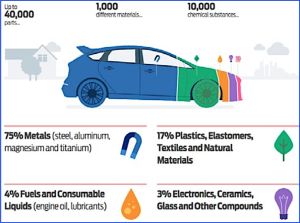 In working collaboratively with its suppliers and other companies to increase renewables use, Ford developed soy foam jointly with auto parts-maker Lear Corp. USB’s Erker says he expects Lear to help its other car-company clients switch to biobased products.

Ford itself is spreading the renewables message as a member of the Bioplastic Feedstock Alliance (BFA) that includes Coca-Cola, Danone, Nestle, P&G, Unilever, The LEGO Group, McDonald’s Corp. and Target Corp.

These leading consumer brands have jointly concluded that “Over the past 15 years progress in life science technology and in agricultural production systems has made it increasingly possible to envision a future where renewable carbon from plants replaces fossil carbon in the production of chemicals and materials needed by society.” This BFA conclusion supports precisely what Ford calls for in its 2017 Sustainability Report and what today’s stalled farm sector needs: “new revenue streams for North American farmers.”