Countries line up for tariff exemptions, as farmers fret retaliation

The European Union, Brazil, South Korea, Japan and other steel and aluminum exporters are scrambling to try and get exemptions to President Donald Trump’s tariffs while much of the U.S. ag sector is worried they’ll be harmed by a backlash.

There are several ways U.S. farmers and ranchers fear they'll be hurt, but the primary concern is retaliation from countries that are hit with tariffs on steel and aluminum. The fewer countries hit with the tariffs, the less threat there is of retaliation, but as of now, trade watchers like Wendy Cutler, former negotiator for the U.S. Trade Representative, say it’s too early to predict who will escape the import duties.

“Where this ends up is anybody’s guess,” Cutler said Tuesday at a forum hosted by the Washington International Trade Association.

Kim Hyun-chong, South Korea’s trade minister, is in Washington, hoping to persuade the Trump administration to exempt his country from the 25 percent steel tariffs and 10 percent aluminum tariffs that were unveiled last week.

Talks between the U.S. and the European Union as well as Japan over exemptions are already going poorly. U.S. Trade Representative Robert Lighthizer met with EU Trade Commissioner Cecilia Malmström and Japanese Minister of Economy Hiroshige Seko last weekend, but Malmström said no agreement could be reached because there was no defined procedure for an exemption.

Trump, in a Monday tweet, suggested he expects something in return for the exemptions: “Secretary of Commerce Wilbur Ross will be speaking with representatives of the European Union about eliminating the large Tariffs and Barriers they use against the U.S.A. Not fair to our farmers and manufacturers.” 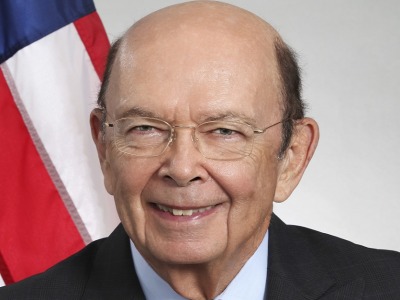 Commerce spokespersons did not respond to requests for details, but a European Commission official told Agri-Pulse that the EU expects “to be fully excluded from the announced U.S. measures without preconditions” and added: “No further meetings as such are planned at the moment. We expect contacts to take place at several levels during this week but the format of further discussions is still to be defined.”

The EU is expected to make public an official list of U.S. commodities that it would retaliate against in reaction to the steel and aluminum tariffs. It’s expected to target products like orange juice, cranberries and bourbon.

Brazil, the second-largest steel exporter to the U.S., is also reaching out to the Trump administration. The South American country could certainly hurt the U.S. ag sector by further tightening restrictions on ethanol imports, but Brazil isn’t yet threatening that yet.

Instead, Brazilian Foreign Relations Minister Aloysio Nunes and Trade Minister Marcos Jorge are making the argument that a tariff on Brazilian steel would hurt the U.S. coal industry. Brazil buys about $1 billion worth of American coal every year to produce the steel it sends to the U.S., but that would be threatened under steep new tariffs, the ministers said in a statement.

China is one country that is not expected to get an exemption from the tariffs, and any retaliation could cut deep for U.S. agriculture, especially soybean growers, who last year sold about 1.4 billion bushels of soybeans to the Asian nation. That's roughly one of every three rows of soybeans grown in the U.S.

China doesn’t export much steel or aluminum to the U.S., but the new tariffs will add to the sting of the penalties already placed on Chinese washing machines and solar cells. There’s also the looming threat that China will react harshly when the U.S. investigation into intellectual property theft by China is completed. That’s expected in August, but it could come sooner.

“We believe this action (steel and aluminum tariffs) could result in retaliation against exports of U.S. soybeans by other countries, and particularly China,” American Soybean Association President John Heisdorffer said in a letter this week to Trump. “We urge you to modify if not reverse your decision to avoid a trade war that could seriously undermine our industry, which is highly dependent on trade.” He concluded: “The importance of the China market in sustaining our livelihoods and our industry’s role in the Nation’s agricultural and rural economy cannot be overstated." 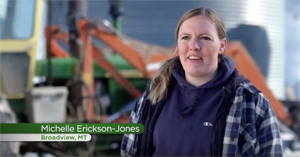 Michelle Erickson-Jones speaks in a Farmers for Free Trade commercial.

In addition, Farmers for Free Trade is spending $500,000 to run a television ad for the next four months, and the main demographic it’s targeting is just one person: President Trump. The 30-second ad, featuring a concerned Montana grain and oilseed farmer, is set to run on Fox and Friends, and air in markets that include Trump’s Mar-a-Lago resort in Florida.

“We depend on free trade policies to maintain our export markets,” farmer Michelle Erickson-Jones says in the ad. “The crops that we grow here on this farm are exported across the globe. Policies that restrict trade would be devastating for farms like ours. Someday I’d like to pass the farm down to my boys. Mr. President, protect free trade and keep our agriculture economy strong.”

Meanwhile in Washington, Trump is getting pushback on the proposed tariffs from farm state lawmakers.

“We are extremely worried the proposed tariffs will have a negative impact on our agricultural economy,” Iowa's congressional delegation said in a letter to Trump. The missive was signed by the state's two senators, Chuck Grassley and Joni Ernst, and four representatives, David Young, Steve King, Dave Loebsack and Rob Blum - all Republicans with the exception of Loebsack. “Many experts have warned tariffs will cause corresponding retaliation by our trading partners. This is concerning because the easiest target for retaliation is our agriculture exports," they wrote.

But threats of retaliation are not the only concern as the Trump administration struggles to handle the multi-pronged effort to both implement the new tariffs and negotiate exemptions. The Trump administration is renegotiating the North American Free Trade Agreement and the U.S. trade pact with South Korea – two massive deals that farmers and ranchers count on to help export their corn, soybeans, rice, beef, pork, dairy, sorghum, potatoes and more – and these new steel and aluminum tariffs are a major diversion.

“All of this … is going to consume a lot of energy and a lot of resources from everyone at USTR and other agencies,” Cutler said. “This will become the agenda and it’s going to distract peoples’ attention from trying to fix NAFTA and KORUS.”