Every year, California acquires on average nine new invasive species, including exotic insects, spiders, mollusks and even South American mammals. Three of those invaders usually try and settle down, start a large family and stake a claim on some of the Golden State’s endless buffet of agricultural crops, becoming the bane of farmers and researchers. 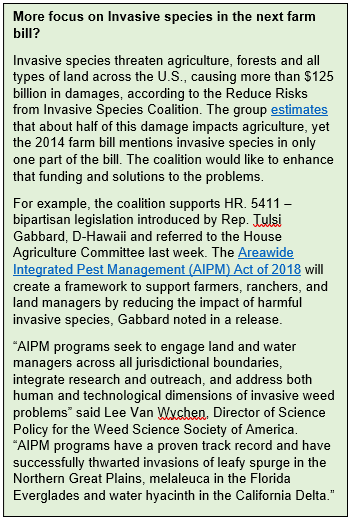 “There are lots of species that get here and don’t become established, it’s just a few that do,” said Jim Farrar, director of the Statewide Integrated Pest Management Program of the University of California Division of Agriculture and Natural Resources.

According to the UC-Riverside’s Center for Invasive Species Research, invasive pests cost the state an estimated $3 billion a year. Intrusive plants alone cost California at least $82 million annually for control, monitoring and outreach, not including crop loss, as reported by the California Invasive Plant Council.

For a new species to become invasive, it needs an appropriate environment, temperature, access to water, a host or a place to become established, like a particular type of soil in the example of a new weed.

A key tool in battling the problem is integrated pest management (IPM), a process that prioritizes minimal risks to people and the environment. It can be used to manage different pests in urban, agricultural and natural areas.

UC IPM gets involved after an invasive species becomes established in California and starts causing damage to the point where regulators can’t prevent it from spreading farther or can’t eradicate it completely.

“We’re not on the front end, but boy, if they get established, we have to deal with it,” Farrar said.

He stated that finding a working, legal pesticide with some research backing it is usually the first response when California gets a new pest. However, this can affect IPM regimens already in place.

“We’ve seen this with spotted wing drosophila and bagrada bug and a lot of others,” he said. “But if you start spraying more for that particular insect, that might damage the biologicals that are controlling other sub-pests for pathogens. So, it causes this sort of snowballing effect.”

It can take years of research to design an ideal program for a new pest. Researchers look at factors like new biological controls, weak spots in the pest’s life cycle, or try to find crops that are resistant. 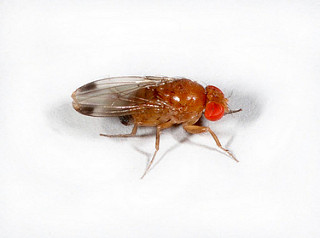 Farrar noted that even international trade can be affected by invasive species, spotted wing drosophila being a prime example. When it showed up in California, no one really knew how to manage it, which led to trading partners finding maggots in fruit and rejecting whole loads of imports.

“If it’s some perishable commodity sent to Japan, they’re not going to send it back, it’s going to rot before that, so typically it just gets dumped,” he said. “So, it has these implications on trade, and whether or not growers get paid for the fruit that gets packed and shipped to the final destination.”

Invasive species typically piggyback into the state from people, usually by accident. Many come over in shipping containers, but some migrate with vacationers returning home with fruit or interesting plants to grow at their homes, unaware that they transported a hitchhiking pest and released it into California’s various microclimates.

Sometimes they are brought in intentionally. Japanese dodder, for instance, was an invasive plant brought to the U.S. for traditional medicinal purposes and has since become a parasite to native plants. The yellowish or orange vine doesn’t photosynthesize for itself and has feeding organs that penetrate the stems of other plants to suck out their nutrients.

Uninvited organisms can be eradicated, however. The European grapevine moth is one example.

EGVM is one of the most damaging insect pests to grapes in Europe and the Middle East because they lay eggs on the berry clusters. The larvae then harm the berries, letting in fungi and bacteria, making the fruit inedible.

Ag industry fights back against effort to rid oats of glyphosate
Battle brewing over water rights in California
Wild horses: Endangered or invasive?

When they were detected in California’s Napa Valley in 2009, most likely transported to the U.S. on equipment or vineyard materials, a coordinated effort involving government agencies, grape growers, local officials and University of California scientists and advisers was established to get rid of the pest.

An IPM program was developed that relied on setting up trapping grids of female moth sex pheromone dispensers to disrupt mating, along with carefully timed applications of insecticides.

According to the UC IPM Exotic and Invasive Pests webpage, the dual pest management approach was conducted for seven years and EGVM detections were reduced from 100,000 moths in 2010 to one moth in 2014 and none in 2015 or 2016. This led the 10 California counties that had been infested to become deregulated, quarantines were lifted and economic well-being returned to the table grape industry.

A similar program is currently being implemented in the California citrus industry due to the invasive Asian citrus psyllid (ACP), which is a vector for citrus greening disease, or huanglongbing. ACP has already decimated the Florida citrus industry because greening is lethal to citrus trees and there is currently no cure for it.

“In California, if the disease got out of the Los Angeles basin and into the main citrus production areas it would be terrible because our production is based on fresh fruit primarily,” Farrar said. In Florida, the crop is used mostly for juice, and discolored or strangely shaped fruit can sometimes be salvaged. “But for fresh fruit, you can’t do that,” he said. “It’s just a loss.”

To see an interactive California map of ACP quarantines and management strategies for commercial and residential citrus, click here.

California’s seasonal wildfires have been increasingly worse due to invasive species and diseases as well. Beetles like the gold spotted oak borer, along with tree diseases like sudden oak death and fusarium dieback, have caused tremendous damage to California forests and certain agricultural orchards, essentially rendering them as firewood waiting for a spark.

Even invasive mammals like wild boars and most recently the South American nutria are threatening California agriculture.

Foraging feral hogs are eroding and uprooting natural and agricultural areas across the country, causing an estimated $1.5 billion in damages annually. Farmers of leafy green crops like spinach are particularly concerned with keeping hogs out of their fields to reduce risks of E. coli from their feces. 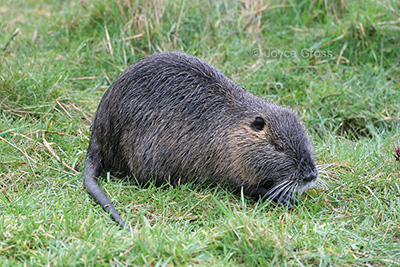 Nutria, a semi-aquatic rodent that eats up to 25 percent of their body weight in wetland vegetation every day, made their reappearance in California last year. It was originally introduced for fur farming more than 100 years ago, but the animal’s fur never really caught on.

“It’s rodent fur, it’s not like mink or anything,” said Peter Tira of the California Department of Fish and Wildlife. “The only people who really made money on nutria were the people selling nutria farms.”

Still, the animal had found a new home. Periodically, nutria would escape the farms and feral populations would get established, but they were eventually exterminated by state wildlife workers. Or so they thought – until last March, when a pregnant, healthy female carrying seven fetuses was trapped. Since then, dozens of the animals have been confirmed in Stanislaus, Fresno, Merced and Tuolumne counties.

“Nutria are especially worrisome because they are the trifecta in the sense that they pose a major environmental threat to our wetlands and environment, they are an A-rated agricultural pest that’s a threat to our multibillion-dollar agricultural industry, and thirdly, they burrow into levees, dikes and roadbeds,” Tira said.

And while their numbers may be small now, nutria are prodigious breeders. They can start breeding as young as four months and produce theirs first litters four months later. They can have up to three litters every 13 months, with 2-13 young per litter; Within 24-48 hours, they’re ready to breed again.

“They live in social groups but the young males are driven out by the dominant male, so they can spread up to 50 miles,” Tira said. “We’re moving quickly to hopefully eradicate them and remove them from the landscape.”