Usually, saying “the fix is in” conjures images of backroom deals that benefit a chosen few. In the case of wildland fire funding, however, the phrase took on a different meaning this year.

That’s because Congress has finally approved a "fire funding fix" designed to solve the issue that has increasingly vexed the Forest Service – not having enough money to fight fires and prevent them from happening without dipping into other programs.

In the omnibus spending bill that cleared the House and Senate last week before being signed by President Donald Trump, Congress included legislation to provide enough money for fire suppression without having to raid non-wildfire accounts in the service’s budget.

“The fire fix is two-fold: It freezes the 10-year average cost used to budget for wildfires at Fiscal Year 2015 levels, and also establishes a separate account for fire suppression that can be used once the cost exceeds these levels,” Colorado two senators, Republican Cory Gardner and Democrat Michael Bennet, said in a press release, one of many issued by Western senators lauding the new legislation.

“The fire funding fix, which has been sought for decades, is an important inclusion in the omnibus spending bill and I commend Congress for addressing the issue,” said Agriculture Secretary Sonny Perdue. “Improving the way we fund wildfire suppression will help us better manage our forests. If we ensure that we have adequate resources for forest management, we can mitigate the frequency of wildfires and severity of future fire seasons.” 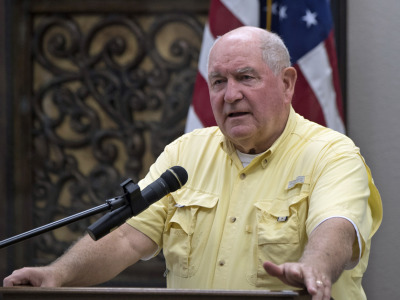 Perdue’s predecessor, Tom Vilsack, frequently called on Congress to fix the problem, ultimately telling them in 2015 that he would not raid non-fire accounts to pay for firefighting but would come back to Congress for emergency funding.

In 1995, wildfire suppression accounted for 16 percent of the Forest Service’s budget, but by 2015, that figure was 50 percent.

The use of funds from non-fire accounts really began to start having an impact in the early 2000s, said Cecilia Clavet, a senior policy adviser at The Nature Conservancy who was part of a coalition that helped come up with the legislation.

That’s “a long enough time that it’s really impacted the functions of the agency,” Clavet said.

The legislation is critical to protecting funding for programs dedicated to forest conservation and resilience, the National Association of State Foresters (NASF) said in a letter thanking congressional leaders.

In addition, the legislation grants “Good Neighbor Authority," which “will allow the nation’s state foresters to work on neighboring federal lands to improve the health of federal forests more often than we were previously permitted,” NASF said.

NASF Policy Director Gary Schiff said the new stewardship contracts will allow businesses to engage in long-term planning. “To be able to have a 20-year contract means industry can invest,” Schiff said.

Schiff said the Categorical Exclusion language will result in a shorter approval process for projects, but Clavet said use of the exclusions will be limited to projects smaller than 3,000 acres whose purpose is reducing the risk of wildfires.