The stage is set for a bitter debate over a new farm bill as soon as next week in the House, but the deep partisan divisions could work in favor of farm groups as they try to stave off cuts to commodity programs or crop insurance.

Democrats, who claim the bill is so bad it can’t be fixed on the floor, are expected to be united in opposing the bill on final passage and also are unlikely to offer amendments, according to the top Democrat on the House Agriculture Committee, Collin Peterson of Minnesota.

He told Agri-Pulse in an interview Tuesday that partisanship should make it easier to defeat GOP amendments to roll back the sugar program or cut other programs such as crop insurance.

Peterson said he doesn’t think any Republican amendments will be approved that threaten farm programs. The amendment debate “will be partisan, and a lot of our people won’t vote for them, because the Republicans are doing them,” Peterson said.

“This is a case where partisanship will help us,” said Peterson. “The best thing I can do to help the process is have no amendments. That’s why I’m doing it.”

Peterson also expressed confidence that the sugar amendment, expected to be sponsored by Rep. Virginia Foxx, R-N.C., would be defeated.

Her amendment is expected to be the Sugar Policy Modernization Act, which would end the marketing allotments that USDA uses to adjust domestic sugar supplies and support the prices paid to farmers. The measure would also force sugar producers to reimburse the cost to taxpayers of operating the sugar program.

House Agriculture Chairman Mike Conaway, R-Texas, is trying to persuade GOP colleagues to vote against that amendment and others by arguing that they would be poison pills that would undermine Republican support for the bill on final passage, dooming the reforms to the Supplemental Nutrition Assistance Program that the legislation contains.

Josh Sewell, a farm policy analyst with Taxpayers for Common Sense, is trying to convince Democrats that staying out of the amendment process as Peterson advocates is “simply playing into Chairman Conaway’s hands. Whatever the merits of the SNAP reforms, it’s clear they are being used to attract conservatives and repel progressives while distracting people from the back-sliding on targeting agribusiness subsidies toward need.”

Rep. Ron Kind, a Wisconsin Democrat who is sponsoring a bill that would make sweeping cuts in crop insurance, has argued to Democratic leaders that it would be a mistake to pass up a chance to force a debate on reform amendments. He said he was reaching out to Republicans who may sponsor amendments he supports and hopes other Democrats will as well. "If everyone just wants to vote no, you can get robots to vote that way," he said. 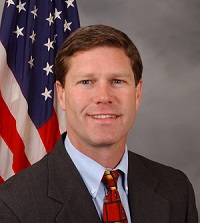 Democrats and anti-hunger groups argue that the SNAP reforms are cruel and unworkable and hope to ensure that they go nowhere after the bill leaves the House. Leaders of the Senate Agriculture Committee have said the provisions are dead on arrival in that chamber, but Conaway says that he will insist that some reform makes it into a House-Senate agreement on the final legislation.

Speaking at an event Tuesday sponsored by the American Enterprise Institute, Conaway said he was still in the process of selling the bill to GOP colleagues. “The education piece is still going on,” Conaway said. “We hope to start honing in soon what our number is by the end of the week.”

The House currently has 236 Republicans and 193 Democrats with six vacancies, but one of those Republicans, Charlie Dent, R-Pa., is expected to leave office on Saturday before the floor debate. That means that Conaway can lose no more than about 20 GOP votes on the bill’s final passage if all Democrats vote against the measure.

Conservative groups argue that the legislation is even worse from their perspective than the 2014 farm bill in part because it would allow members of S corporations and partnerships and producers’ cousins, nieces and nephews to each qualify for up to $125,000 in commodity subsidies annually.

“We are a little concerned that the issues going on with trade right now will make it more likely for people to support subsidies,” she said.

Anti-hunger organizations, including the nation’s food banks, argue that the expanded SNAP work requirements in the bill would be unworkable and would increase hunger.

Under the bill, adults under 60 would be required to work or be in training programs at least 20 hours a week, including parents of children over age 6.

Representatives from food banks that are part of the Feeding America network have been meeting with House and Senate offices this week to argue that Congress should wait on tightening work requirements until the completion of 10 pilot projects authorized by the 2014 farm bill to test various ways to move SNAP recipients into employment or better-paying jobs.

“If this version of the bill goes forward, it will have a boat-swamping effect on our network and food banks simply will not be able to make up for $17 billion in seemingly arbitrary cuts to SNAP benefits – a loss of more than nine billion meals from the plates of working families, children, and veterans,” said Mark Knott, president of Feeding America.

He was referring to the fact that the bill would reduce benefits by a net $17 billion over 10 years and put the savings into employment and training programs, child support enforcement and other provisions.

Advocates of welfare reform say the bill would provide a good start toward tightening work requirements.

The “bill as a whole is a tremendous improvement,” said Jason Turner, executive director of the Secretaries' Innovation Group, a coalition of GOP-run state social service agencies. He doesn't think the work requirements go far enough. For example, any parent with children over the age of 3 should be required to work, he said.  “In the private sector we don’t give maternity leave to moms up to age 6,” he said.