Home » Is a changing China good or bad for US producers?
News Politics Trade China 2018

Is a changing China good or bad for US producers?

“I don’t even recognize this place.”

The man who made that comment had been to Guangzhou, China a few times just over 10 years ago, only to be welcomed back to completely unfamiliar territory.

A nighttime bus drive through the sprawling city offered up views of glitzy skyscrapers with lights dancing across their shiny exteriors with different degrees of success. One building projected what appeared to be part of a computer desktop – complete with cursor – on its giant screen, a stark contrast to the multicolored displays seen elsewhere on the skyline.

The bus ride and non-descript comment underscored what became clear for a number of participants in the National Association of Farm Broadcasting’s recent trip across China: the country is changing and changing fast.

The Asian giant is home to about 1.42 billion people who are rapidly moving off their small farms and into urban areas.

One tour guide spoke of the ability of local construction crews to build a 30-story building in about 70 days. Many of the travel depots used by the group were either fresh off an expansion or had one planned in the near future. On more than one occasion, a guide pointed out a window to a section of similarly appointed high-rise buildings, only to inform the group that where those buildings stood was farm ground just a few years ago.

China’s advancements were clear for Bob Thompson, a former USDA undersecretary and ag college dean with more than 20 trips to China under his belt. While the physical structures offer a visual representation of the changes underway in the country, Thompson is also aware of other areas where China is gaining ground on the U.S. and may have already gained an advantage.

“It’s said today that if you’re in agriculture biotechnology, there are vastly better facilities to do your Ph.D. research in China than in most American universities,” Thompson told Agri-Pulse. “That scares me.” 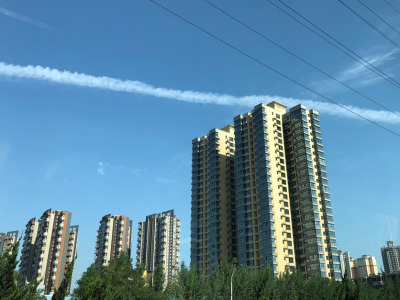 These towering housing units stand on ground that was once used for farming.

As China continues to grow, instances of superiority over the U.S. – whether perceived or actual – could continue to materialize. However, China’s various forms of advancement could also prove beneficial to U.S. producers looking to move bumper crops to overseas markets. While China’s massive infrastructure plans could grease the wheels on moving U.S. ag products, it could also make it easier to import goods from other countries.

Considering the good and bad outcomes that could come as a result of shifting Chinese ag policy, tour participants remain optimistic that the country will always have a role for U.S. agriculture to play.

As Missouri farmer Gary Porter puts it, the agricultural land that was visible on a bullet train ride through the country would need a lot of help to feed a nation of almost 1.4 billion people.

China’s grain quotas may not be a US victory after all
US ag exports are growing, but China deal isn’t a panacea
Branstad hopeful for resolution to US-China dispute, but won’t accept ‘crumbs’ to end it

Thompson agrees, also pointing to very dry conditions in the western two-thirds of the country that would be prohibitive for food production. However, he did point to China’s booming protein sector as a major change he’s noticed, and that sector will need a good deal of feed – like U.S. soybean meal and corn – to feed its animals.

Currently, many Chinese farmers are being placed in some of those large high-rise buildings and given apartments to live in and rent out as a source of income. Doing this may clear the path for further urbanization of farm ground, but it will also force greater reliance upon the land that will stay in production. After years of environmentally harsh farming practices, some soil is lacking in organic matter, and about 80 percent of China’s groundwater is unfit for human contact.

With those conditions at play, making the most out of available farmland will be a key part of Chinese agricultural success. That in mind, advancements in biotechnology could play a key role in yield improvement. In the past, China has had a complicated relationship with biotech products, often slow-walking approval of new traits or expressing concern about the safety of the technology. In one case, China’s biotech policies have caused litigation in U.S. courts when non-approved corn showed up in China. 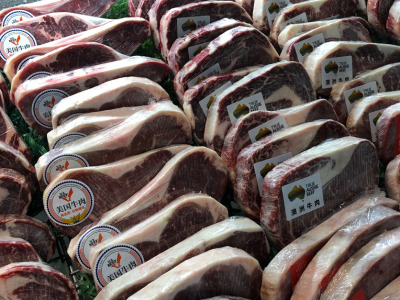 Chinese consumers are increasingly receptive to imported foods. In this store, American and Australian beef are sold side-by-side.

But now, China is investing in the crop science industry, including ChemChina's acquisition of Syngenta last year, and becoming a top spender in agricultural research. A fair argument could be made that the Chinese may have had some catching up to do, but that investment could also spin off new technologies used by farmers around the globe.

Fred Yoder, an Ohio farmer and the co-chair of Solutions From the Land, sees that as a good thing.

“I think the fact that we all get on the same page and understand that science is our best friend, I think it’s going to be a plus,” he said. “It’s not going to be long before China will have registered their own biotech here in China and will want to sell it to the United States, so I think we need to get ready for it.”

Of course, all of these observations must be viewed through the lens of a possible trade war between China and the U.S. If retaliatory tariffs make U.S. commodities uncompetitive for Chinese buyers, they will look to other parts of the world to source commodities.

“We’ve got to get rid of that,” Yoder said of the pending trade war with China. “Whatever the market is supposed to be, we need surety. We need confidence.”

Former Ag Secretary and Illinois farmer John Block is also on the trip and, like many other farmers, has been keeping an eye on U.S.-China trade relations. While no one is excited at the opportunity of having tariffs placed on their products, Block says he believes the trade dispute can be resolved.

“I’m still optimistic that it will not escalate and that eventually our trade relations will get better and stronger,” he told Agri-Pulse. “I think it won’t escalate because I don’t think Donald Trump really, in the end, wants to have a trade war. I don’t think that President Xi wants a trade war either.”