How clear and inclusive should GMO food labels be? The agricultural sector is in serious discord over big slices of that question.

On its face, Congress’ 2016 directive seems straightforward: Food labels must declare the presence of GMOs – genetically modified organisms – in ingredients.

A leading group advocating that very mandate, for example, had the idea and named itself: Just Label It.

Alas, an ocean of complexity has swelled up since USDA’s Agricultural Marketing Service waded into implementing the law in a call last fall for suggestions on a regulatory scheme. More recently, the agency gathered more than 14,000 comments from interested citizens, groups and companies on the proposed regulation it posted in May.

The complexity stems in part from the subject itself – biotech regulation spurs contentious debate – but also via AMS’ generous suggestions and invitations for alternative rules on just what items should require GMO labeling; what is GMO anyway; what kinds of labels can be used; what products can be exempted; and other crucial pieces of the required regulation.

Whether speaking for conventional or organic farmers, consumers, food manufacturers, retailers or other interests, all participants in the AMS rulemaking say they want the label requirements to be simple, clear and cover all GMO products. The debates then begin on what those parameters actually mean.

The Coalition for Safe Affordable Food (CFSAF), formed by interests from across the food and agribusiness sectors, joined in very general support of the mandate.

In its comments, CFSAF spoke for its spectrum of members on many labeling questions. In fact, it proposed an alternative to AMS’ idea to compile two official lists naming all of the food and beverage products covered by the regulation, for major commodities and another for those less significant. CFSAF proposed, instead, a single list of included products plus a list of excluded products, those tested and found to contain nothing regulated as GMO material.

The latter list would be a big deal for producers and processors of biotech crops along with manufacturers using them, since it would mean waivers from the regulation for commodities that are refined from GMO crops (corn syrup, sugar, soy or canola oil) but have no identifiable DNA (GMO proteins). 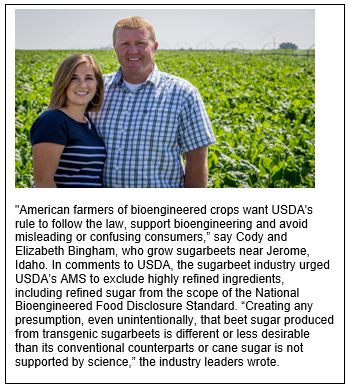 In joint comments, the American Farm Bureau Federation and major crop producer groups point to the text of the law, which limits its mandate to food “that contains genetic material that has been modified” by biotech techniques. The refined products no longer contain GMO matter, and they argue that “excluding refined products from the definition of a (GMO) food is supported by numerous scientific studies demonstrating the absence of modified genetic material from refined ingredients” from their biotech crops.

"So, if you’re going to have a bioengineered label on something, then that should mean there is material in it that contains an ingredient that was bioengineered,” Nathan Fields, director of biotechnology for the National Corn Growers Association, said. “But if that ingredient has no protein or DNA in it, then technically it is just what it is,” unrelated to GMOs, he said.

What’s more, farm groups point out that many foreign countries that already require GMO labeling waive such refined products. “Japan, Australia, New Zealand, Thailand, Indonesia, Malaysia, and South Korea have strict labeling regimes but do not require the labeling of refined ingredients from bioengineered crops,” the American Soybean Association said in its comments, and AMS made similar observations in its own proposal.

The Grocery Manufacturers Association, meanwhile, has planted its feet on both sides of the refined products question. Many of its members already voluntarily stick GMO labels on the refined, GMO-sourced, products, and GMA asks AMS for the regulation to cover those products. It advises that consumers will expect to know if a product contains an ingredient that was sourced from a bioengineered crop regardless of whether the refining process removes the modified genetic material.

Not including refined ingredients would undercut the purpose of the 2014 law, GMA says, noting that “90 percent of the U.S. corn, soybean, and beet sugar crops are bioengineered” so a lot of food and drink in American menu has ingredients from those crops.

Will tomorrow’s consumers be educated or inundated by proliferating food labels?
Climate-smart labels for food debated as part of USDA funding initiative

On the other hand, GMA also supports, “as an alternative,” the CFSAF proposal for the alternative list, which may allow waiver of refined products from the regulation. “I think that is the nature of coalitions,” said Roger Lowe, GMA executive vice president. “We’ve already stated what we strongly support,” he explained.

“It’s important to remember the spirit of this law, which is to make sure that consumers who want information about if ingredients in their products are derived from bioengineering, they can find that information,” Lowe said. He added that U.S. foodmakers are already implementing SmartLabel on more than 30,000 products. The app lets shoppers read a boatload of information (including GMO data, if wanted) on their smart phones about food products

Still, the legislation’s sponsors and USDA officials says the agency has authority to require GMO labeling for the refined products. Sen. Debbie Stabenow, D-Mich., who co-authored the bill, declared at its passage that “this bill gives USDA broad authority to determine . . . what foods will be subject to this bill's mandatory disclosure standard, including highly refined products derived from GMO crops and products developed using gene-editing techniques.”

Despite declarations such as Stabenow’s, the inclusion or exclusion of foods with gene-edited ingredients from the mandate is another major point of contention.

CFSAF, GMA, and groups favoring conventional agriculture all point to the legislation’s front-page definitions, which re-designates what Americans call GMOs as ‘bioengneering," and then appears to remove gene-editing techniques from coverage. It does so by excluding cellular tweaks that “could not otherwise be obtained through conventional breeding or found in nature.”

Scientists confirm that they cannot differentiate gene-edited alterations from conventional breeding or mutations caused in nature. Adam Bogdanove, Cornell University plant scientist, explains that, whether a researcher uses bits of recombinant deoxyribonucleic acid (rDNA) or other insertions, such a tool “does the edit and then within minutes to hours it just disappears; it is degraded. It gets broken down into the basic building blocks. It gets recycled. It never gets integrated into the genome.”

If, using another gene-editing process, he said, a DNA molecule is used to make genome edits, it is removed in the organism’s next generation by just selecting specimens without that DNA.

Nonetheless, organic advocates, farmers who grow and market their crops as non-GMO, and consumer groups demand that the regulation require labeling for gene-edited ingredients.

Sophia Kruszewski, senior policy specialist for the National Sustainable Agriculture Coalition, told AMS that for both gene-edited ingredients and the refined commodities, the law’s sponsors and USDA have declared the agency has authority to include both categories, and consumers want to know “processes that went into the final product, not simply the contents of the final product.”

“Splitting hairs about definitions misses (the) . . . point,” Kruszewski said.  “Primarily, we urge that the definition of bioengineering be broadly interpreted.”

What’s more, the very name of the regulation is controversial. Consumer advocates and organic and sustainable farming groups condemn the “bioengineered” term that both the statute and the AMS proposal substitute, along with the “BE” icon that AMS proposes for the labels, rather than the traditional GMO or GE (genetic engineering).

“Congress gave AMS the authority to include additional terms, and we urge AMS to utilize terms that are more recognizable . . . in the discourse around genetic engineering,” Kruszewski said.

CFSAF and groups favoring conventional agriculture aren’t objecting to the switch to BE, though GMA cautions AMS that, with the established terms such as genetic engineering and genetic modification, “consumers may be confused about the new, significantly narrower meaning of ‘bioengineering.’” GMA also advised that BE terms might complicate USDA’s intended pre-emption over state laws on GMO biotech labeling.