When USDA officials announced last week that they were planning to help farmers hard hit by trade disputes with up to $12 billion in assistance, the news was largely welcomed in farm country as a way to provide short-term relief. But new concerns are emerging.

The aid program is split into three parts, including a Market Facilitation Program (MFP) that will rely on the Commodity Credit Corporation to provide the funds for direct payments to soybean, sorghum, cotton, corn, wheat, dairy and hog producers. Another part is the Food Purchase and Distribution Program that allows the USDA to purchase surplus commodities that would have been exported if not for tariffs. The third part is the Trade Promotion Program, aimed at developing new foreign markets to replace ones the U.S. is losing in its trade wars.

But like most government programs, the “devil is in the details,” and USDA has had few specifics to share publicly since the initial announcement was made. That’s caused some farm leaders to question how payments will be calculated – especially with severe drought devastating crops and pastures, prompting some farmers to liquidate cattle herds.

The proposed MFP will provide “welcome financial assistance,” noted Missouri Farm Bureau President Blake Hurst in a letter to Agriculture Secretary Sonny Perdue and Missouri’s congressional delegation on Tuesday. But he’s also worried about how payments will be calculated. 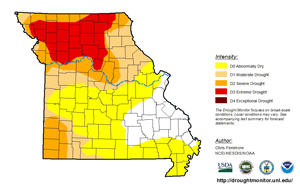 The most recent drought monitor shows widespread drought throughout Missouri.

A recent drive across his state’s northernmost counties indicated that “most of the corn is these counties will yield less than one third of normal yields. Corn yields will not respond to rain at this point. Soybeans are showing extreme moisture stress and are within days of a total crop loss, Hurst noted. (Of course, Missouri is not the only state suffering from drought this year. See drought index map.)

“If the MFP is based on this year’s yields, it will provide no help at all to the victims of this isolated but severe drought,” Hurst wrote.

Hurst explained that “farmers typically spread marketing of a single year’s crop over at least three years, selling some of planned production before planting, some during the growing season, and some in the year following harvest.

For now, USDA has not provided any additional details on how the MFP will be calculated. Ag Secretary Perdue said Monday that, “We want to under-promise and over-deliver in this program.”

“I liken it to … an insurance claim. If you have a crash in your car and it’s totalled and you get a check from the insurance company, most of us never feel like we’re made whole,” Perdue told reporters. “I think we’re just trying to make the expectation that if a farmer sees a $2 drop in soybean prices, then they should not necessarily expect a $2 per bushel mitigation payment.”