Farmers look to bird-drones, lasers to scare pests away

“Our goal is to help producers reduce or alleviate a percentage of the damage caused by birds by using the integrated tools we have available to us,” John Paulson, director of APHIS Wildlife Services NWRC for North and South Dakota, said. In his team’s arsenal are traditional bird deterrents, including 600 propane cannons and thousands of pyrotechnics and the pistols used to deploy them, as well as new tools such as raised cannon platforms and unmanned aircraft systems, or drones.

John Sandbakken, executive director of the National Sunflower Association, said much of the bird-related damage to sunflowers occurs in North Dakota, a state with rich roosting habitat directly in the flight path of migrating blackbirds.

Page Klug, NWRC research biologist, is working to develop new tools to prevent migrating birds from damaging crops. The most promising tool being tested is the drone.

Clear Flight Solutions, based in the Netherlands, has developed a commercial drone that resembles a falcon called Robird, but researchers are still learning how best to use the technology. Currently, Robird is being used to haze birds at waste sites in Europe, the Edmonton airport in Canada, and a blueberry farm in the Netherlands. 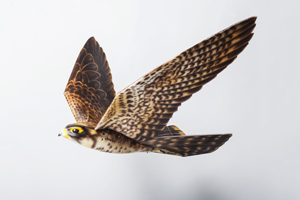 Brown Robird similar to the grey version pictured above.

Klug is currently testing multi-rotor quadcopter drones, fixed-wing drones, and fixed-wing drones with the silhouette of a raptor. Of the three types, she says, the drone that resembles a raptor scared birds in the laboratory setting and flocks in the field sooner than the other two drones, but not enough to send them on their way. “Birds in large flocks behaved like they do to native predators,” Klug said. “We got a flight response. The flock split but then came back down to the same field.”

Rather than just eliciting a flight response, Klug thinks that using drones to herd large flocks to keep them moving along their migration path might be a better strategy. “I’m thinking a single drone won’t work for a flock of 20,000 birds,” she said. “Perhaps a better strategy would be to use drones to round the birds up and push them in a different direction.”

Other researchers are testing light and sound technologies, but Klug says birds tend to become habituated to sound, including propane cannons, and, while light technology is being used to some extent in Europe, and now in Argentina, it is still in its infancy.

Robotic scarecrows that shoot laser beams randomly across agricultural fields as large as 3,000 acres are being used in the Netherlands, while handheld lasers that deter birds have also been used in the United Kingdom. The Netherlands Enterprise Agency (DHI) in conjunction with INTA, an independent agricultural research center in Argentina, recently conducted successful Agrilaser technology trials in Argentina, where local sunflower, grape, and blueberry farmers testing the technology reported that crop losses declined between 70 and 90 percent.

downside to robotic scarecrows, propane cannons, and other techniques that use loud sounds or bright lights is that those living in rural areas could find them offensive, but the tools typically are used only for a few weeks in the fall when birds are migrating or when fruit and sunflower seeds are mature.

Consumer consequences can also occur when crop producers fail to manage for bird damage. The United States is the world's second-largest sweet cherry producer, accounting for 15 percent of the world's cherry production. In a NWRC survey of five cherry-producing states, respondents estimated their average yield loss due to bird damage at 13 percent and that their use of bird management methods reduced losses by 21 percent. Those who used no bird management saw losses near 26 percent. The NWRC economists also looked at the resulting cost to consumers of not managing for bird-related damage and found it to be $29 million annually in the long run.

“We need to look at new, innovative techniques and enhance the techniques we have,” Paulson says. “Propane cannons, when set on the ground, tend to get muffled. By getting the cannon off the ground, we have a more effective scare technique and better sound resonance.”

Paulson also believes that drones will play a role in bird management going forward. “The technology is there. Down the road, I could see sunflower producers having solar-powered drones that detect the sound of blackbirds. When the birds arrive, the drones lift up, bells and whistles go off, they chase the birds away, and then come back to the launching station.”