When news hit that the dairy farm owned by the family of U.S. Rep. Devin Nunes, a Republican who serves California’s 22 District, moved from California to northwest Iowa, some wondered if Iowa would be the next magnet for dairy producers leaving West Coast states for greener fields.

While it’s true that Iowa’s dairy industry has seen gains over the past five years, it appears South Dakota’s growth could be spilling into the Hawkeye state. South Dakota, which is actively trying to lure new dairies, is one of the fastest growing dairy states in the country. According to Marv Post, president of South Dakota Dairy Producers and chair of the American Dairy Association for South Dakota, the growth occurring in northwest Iowa is likely due to some dairies finding it quicker to get a permit to build across the border.

Most of the growth in South Dakota — and Iowa, for that matter — has occurred along the I-29 corridor, which runs north-south through both states, about 10-30 miles from the Minnesota border.

About a decade ago, industry consolidation in South Dakota sent dairy cow numbers to a low of about 80,000 head, but today, the state’s milk cow numbers have rebounded to 120,000 cows, according to USDA data. 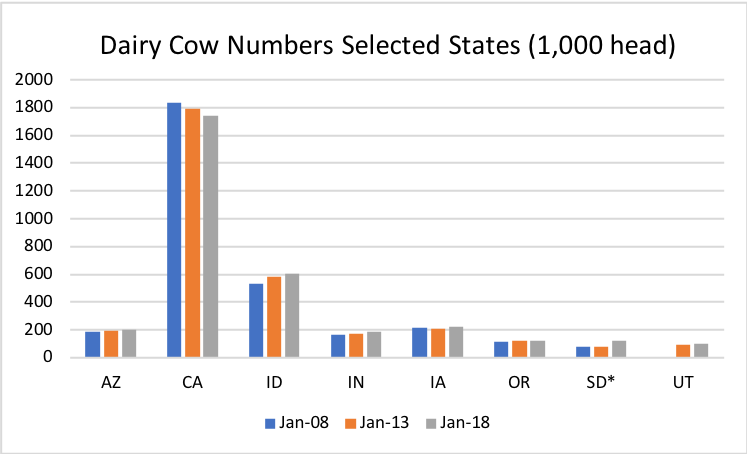 “We have been growing at about 6-7 percent a year, and we are looking at even stronger growth going forward,” Post notes. Initially new entrants from Canada and Europe spurred the state’s growth, but today South Dakota is seeing an influx of producers from other states.

“California dairy producers are coming in and we are seeing some interest from Minnesota,” Post says. “Some California producers are building multiple sites.” Over the last six or seven years, Post estimates that producers moving into South Dakota from California represent an additional 30,000 to 35,000 cows.

This growth “can create problems because some of the smaller dairies are going out of business due to low milk prices, and some are pretty angry about it,” says Post, who milks 70 cows, well below South Dakota’s average herd size of more than 500 cows. “But as a small dairy producer, I need the large producers to sustain the state’s infrastructure.”

Dairy farm numbers are decreasing throughout the country, but in some states, like South Dakota and Iowa, cow numbers are holding steady or rising. For instance, California dairy farm numbers have dropped 13 percent from 1,605 in 2013 to 1,390 in 2018, and cow numbers have also declined, dropping more than 5 percent to 1.739 million from January 2013 to January 2018. Over the same period, the number of dairy farms in South Dakota declined by 31 percent, from 325 in 2013 to 225 in 2018, but cow numbers increased by nearly 50 percent.

Sara Dorland, economist with the Daily Dairy Report, says that producers who want to expand into other states look for several conditions, including low input costs, good labor and land availability, manageable environmental regulations, and the potential for future expansion, including a healthy processing sector.

“Most likely, some California dairy producers — as well as producers from a few other states —  will continue to look to other states to expand production,” says Dorland. “These farms have the expertise and the capital to invest. Looking at California, there is a higher and better use for the land that can generate a better return than dairying. These farms likely still see the benefit and return from dairy farming, just not in the Golden State.”

Changes in cow numbers in some of the other states drawing out-of-state dairies are not as startling as they are in South Dakota. For instance, over the past five years, cow number have increased by only 7 percent in neighboring Iowa.

Mitch Schulte, executive director of the Iowa State Dairy Association and farmer relations representative for the Midwest Dairy Association, notes a few California dairies have moved into northwest Iowa over the years, but not a lot of expansion has been occurring over the past several years because of low milk prices.

“As a dairy goes out of business, the operator down the road is given an opportunity to expand,” says Schulte. “In a lot of situations, where a dairy farmer knows that the next generation wants to come into the farm, operations are expanding to support two families, or they look to efficiencies, like robotics, to cut costs.” 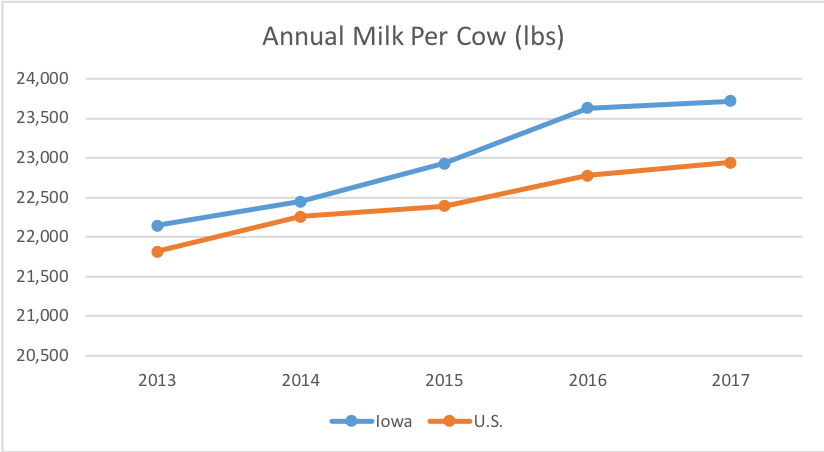 While Schulte notes that most of the processing plants in the Midwest are running at capacity and are not taking on more milk, that’s not the case in South Dakota. Valley Queen Cheese in Millbank, S.D., recently expanded and is now processing 1 million pounds of additional milk a day, and Agropur is in the process of expanding its Lake Norden cheese plant, which will require the milk of another 85,000 cows — a 72 percent increase—by late 2019 or early 2020, Post says.

“A number of dairies have completed construction in South Dakota this year, and there is a 10,000-cow dairy already permitted that will be built next year,” Post adds. “Dairies representing another 25,000 to 30,000 cows are already permitted, and about 15,000 of those cows represent producers coming in from other states, one from Minnesota and one who owns a dairy in both Washington and Oregon.”

Dorland thinks U.S. cow numbers will increase over the next five to 10 years, but only slightly. “Farms are looking at ways to be more efficient. Genetics, cow comfort, herd health and nutrition are all evidence of doing more with less. That any dairying region in the world can continue to deploy cows at the pace of the last 20 years is highly unlikely given environmental regulations,” she says. “It seems, efficiency will be where most expansion comes from in the next decade.”