Advocates for America’s organic farming and foods sector described a mix of regulatory and marketing battles when addressing the annual meeting of the North American Agricultural Journalists on Monday.

“There’s always diverse opinions in organic, and it drives debate, and I think that’s really healthy,” said Laura Batcha, executive director of the Organic Trade Association, which represents the spectrum of organic farmers and other operations, big and small.

The U.S. organic sales zipped past $50 billion in retail sales in 2017 (the latest estimate), according OTA, but speakers described an agricultural sector under siege.

Dave Chapman, a Vermont organic farmer, declared “there is a hostile takeover going on.” He heads the recently organized Real Organic Project, with its plans to offer a new add-on label to USDA Organic label, imposing stricter standards than required and imposed for USDA’s label.

The 1990 law initiating the USDA’s program “is still a good law, but it’s not being followed very well,” he says. “The hydroponic invasion (certifying hydroponic crop production as organic) is one big example of that, and the CAFO (concentrated animal feeding operations) is another big example,” he says.

So, Etka explains, “to be certified for organic crops, a farm must have an organic system planned and must … foster soil fertility, primarily through management of organic content in the soil. Organic standards also require operations to enhance natural resources and biodiversity.”

Those concepts form the roots of most organic farmers’ opposition to certifying hydroponic or aquaponics crops as organic. What’s more, USDA ruled in favor of certification of such production systems even though no specific standards have been written for them, and Etka says, “production systems that do not have clear standards should not be certified.”

In fact, opposition is high throughout the organic sector to both certification of hydroponic crops and USDA’s 2018 termination of new animal welfare standards that were approved at the end of the Obama administration.

Chapman complains “an organic consumer expects an organic egg was laid by a chicken who runs around in a pasture,” but notes estimates by a recent director of USDA organic program that “75 percent of the eggs that are now being certified would be decertified if the animal welfare reform had been implemented by the Trump administration. But it was not.”

On the other hand, Lee Frankel, executive director of the Coalition for Sustainable Organics, representing hydroponic and container operations, points to an ongoing “debate about how much do we keep evolving away from the original technical definitions” as organic production evolves to accommodate urban farming, for example, or producers who must use water-saving systems in arid regions.

Besides, he says, “you ask most customers why they buy organic and they’ll say because it’s free of GMOs; it’s free of pesticides,” and he hopes producers in diverse kinds of organic operations will “try not to disparage each other too much.”

Batcha pointed out that USDA had allowed a decade ago for certification of containerized crop in limited types of production, though it never developed standards. Still, she argues for traditional organic advocates to not get too bound up in production details such as containers.

“When the definition becomes all or nothing, the debate becomes about that rather than about what’s happening on the farm altogether, and I don’t think that does a (positive) service to organic production,” she said.

“Whether big or small, the companies support a regulatory framework that (includes) strict standards,” she insists. An organic farmer herself, she said she recently, for example, visited a “California farm of 40,000 acres of certified organic production” and observed the farmer practiced robust crop rotations, cover cropping and other organic tenets. 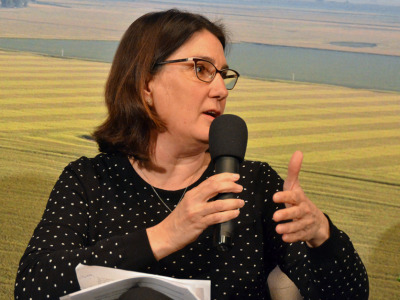 Rather, she believes, the chief conflict is “really not so much within organic, but it is between organic and this administration’s extreme anti-regulatory posture … (which is) holding back development of standards to the point of … real fracturing within the sector.”

Chapman, meanwhile, says the erosion of USDA organic standards began before the Trump administration and noted that all members of USDA’s National Organic Standards Board, which recommended allowance for hydroponic and aquaponic certification in 2017, were appointed during the Obama administration.

On the other hand, while Chapman says, “I don’t think we are going to be able to reform the National Organic Program” during the current administration, Batcha encourages organic operators to keep trying. She pointed out that OTA is suing USDA over its termination of the animal welfare standard. “We think we can … force them to release those final regulations.” She notes, too, that the 2018 farm bill forces the administration to complete a regulation against fraud in organic imports.

Etka agrees with Batcha that the organic program “should be about continuous improvement.” The plethora of add-on labels that have surfaced in the past decade or so, reflects, in part, “how a government label can be slow in keeping up with evolving consumer expectations,” he says.