Special salary report: Think you want to be an Ag dean?

The university administrators charged with educating the next generation of agriculturists earn as much as $418,000 a year, but most earn much less than that and salaries vary widely depending on enrollment, responsibilities, location and other factors.

According to an Agri-Pulse analysis of information obtained through online research, university correspondence and Freedom of Information Act requests, deans of agriculture colleges at the nation's land-grant universities are paid an average of more than $250,000 per year after paying for multiple degrees. We did not include additional benefits such as health care, travel, etc. because most of that information was not readily available.

Salaries for ag deans at the historically black land-grants, known as 1890 institutions, average $149,210 a year. Salaries for the larger land grants, established under the 1862 Morrill Act, average $282,895 a year.

Patrick Stover, vice chancellor and dean for agriculture and life sciences at Texas A&M University, is the highest paid at $418,000.  The other top four include: The University of Maryland's Craig Beyrouty, Robert Goodman at Rutgers University, Shane Burgess at the University of Arizona, Utah State University's Ken White. The UC Davis dean ranks 9th in our survey. 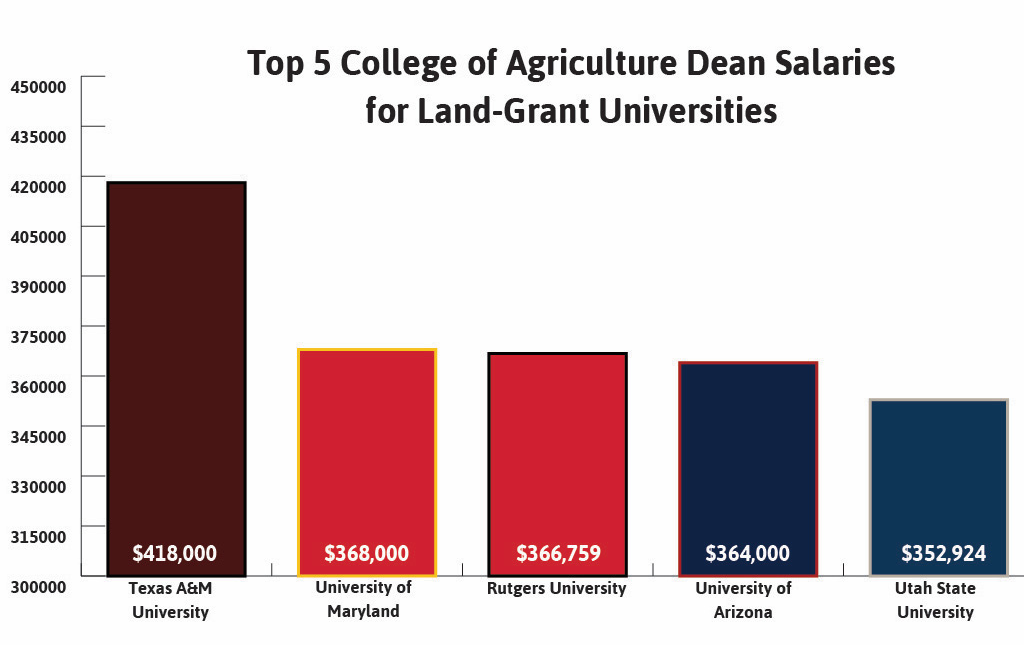 By comparison, Texas A&M's president, Michael Young, has a base salary of $1 million a year under a five-year contract. The school's football coach, Jimbo Fisher, has a 10-year contract worth $75 million, and several of Fisher's assistants make more than $1 million annually. The average Texas A&M professor's salary is $127,000, according to Glassdoor.com.

Individuals who lead some of the nation's top trade associations for agriculture, food and energy also make more than several of the deans. In the Agri-Pulse annual CEO salary report last year, seven CEOs topped $1 million in base compensation and more than a dozen made over $500,000.

The land-grant system and its leadership is considered invaluable to American agriculture. In many cases, the extension system that is commonly under their umbrella is the first line of education to disease and other threats facing production agriculture. They also educate students looking to enter the agricultural workforce, be it as a farmer, agronomist, communicator, or agribusiness executive.

The Morrill Act provided states with land and funds to establish colleges specializing in agriculture, home economics, and mechanic arts. After the Civil War, the federal government was unable to gain cooperation from southern states to allow admittance and enrollment for all students, so the second law was passed in 1890, to provide funds to establish land-grant institutions for African-Americans.

Around the country, an ag dean's salary is typically tied to their job responsibilities. Doug Steele, vice president of food, agriculture, and natural resources at the Association of Public and Land-grant Universities, told Agri-Pulse that “there are core principles you see at every college of agriculture, but after that they become very unique.” For example, some deans are responsible for research and extension programs, while others are not.

Ag dean salaries frequently, but not always, reflect the nu 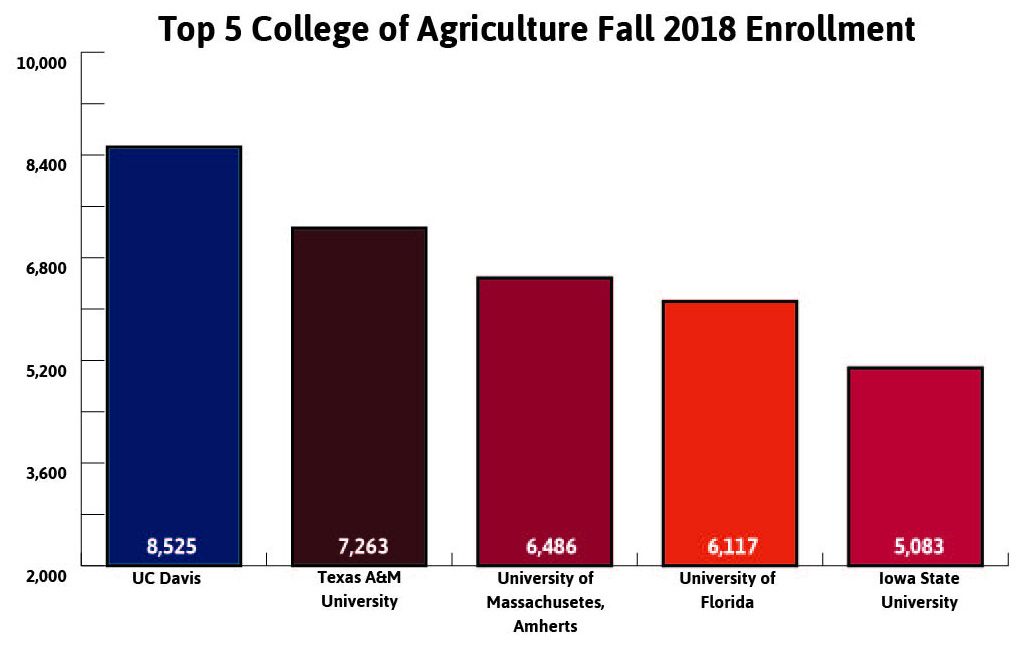 mber of students enrolled in the ag college. Only one school — Texas A&M — falls in the top five of compensation and enrollment. The top school for enrollment — UC Davis — has more than 8,500 students; some other ag schools have fewer than 1,000 enrolled. Texas A&M has 7,263 in its ag school, the nation's second largest.

Cost of living likely plays a factor in some salaries. Maryland's ag school, located in the Washington suburbs, has 1,529 students, fewer than universities such as South Dakota State and New Mexico State, but Beyrouty's salary is the second highest at $368,000.

Aside from varying levels of pay and responsibilities, ag deans can also take a variety of paths to their position, although most rise through the faculty. Once they have a “proven track record as a faculty member,” Steele said, the next step is to become a department head.

“At the department head level you start managing the budgets and the personnel within that department,” preparing them for the next step. In many cases, that means moving to an associate dean role.

“Most of our colleges of agriculture might have an associate dean for extension, one for research, and one for teaching,” he said. A good job in this role would likely qualify someone to be considered as a potential dean.

But there are also those who take unconventional paths to their positions. Cathann Kress, vice president for ag admission and dean of the food, agricultural, and environmental sciences college at The Ohio State University, had stops at USDA and the Department of Defense on her career path.

"I can’t say that throughout my entire career that I had the aspiration to be a dean, but certainly I think as my career evolved ... and I became familiar with the role that the dean played and everything else, absolutely it became one of my aspirations," she told Agri-Pulse.

Depending on how willing to relocate a candidate might be could hinder opportunities available to them for dean positions, Steele said.

“If you are not geographically mobile," he said, "you might not have the same opportunity as someone who is willing to get experience at one institution and move to another one.”

“A majority of our deans don’t move specifically for the salary increase; they move for the responsibilities of the position and new opportunities,” Steele said.

In fact, former University of Georgia ag dean Gale Buchanan told Agri-Pulse, if money is your motivation, "you are probably in the wrong business." 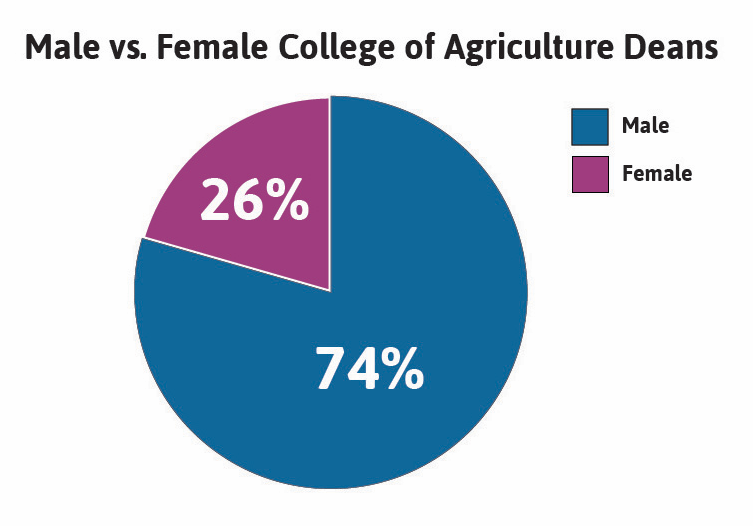 Women make up 26% of the ag deans, and that share is likely to grow, Kress said, due in part to seeing "far more gender parity in our students, in our junior faculty," which she says broadens the pool of viable candidates for leadership roles within ag departments.

Among all land-grants, a female dean earns more than her male counterpart - $281,159 for women versus $256,024 for men - but that average is skewed by the fact that the lower-paid deans at the smaller 1890 institutions are predominantly male. For the 1862 land-grants, there is virtually no pay gap. The male dean earns $283,490 on average compared to $281,159 for the female dean.

Information from some schools was not available.

Tuskegee University in Alabama was granted 25,000 acres of land by the federal government under the Morrill Act of 1890 but, 12 years later the school decided to go private. As such, the university declined to release salary data.

Cornell University is the designated land-grant university for New York, but it is also a private institution, so the reported salary only reflects the state appropriated funds and not the full amount.

Insufficient information was available for the University of Alaska and West Virginia State University.

For a complete list of the salaries, enrollment, and responsibilities of the ag deans of the land-grant universities in the U.S., click here.