After a neighbor’s feisty, big-boned, short-haired Belgian Malinois bit through her hand at age 3, Valerie Woo, of Springfield, Va., thought she would be afraid of dogs for the rest of her life.

“I still have the scars from his teeth,” Woo told Agri-Pulse. “After that, it was just a blanket fear of dogs. I was just [as] afraid of a German Shepherd as I was of a Chihuahua.”

But several years later, Woo has overcome her fear and now serves as an Agricultural Specialist K-9 handler for U.S. Customs and Border Protection at Washington-Dulles International Airport.

Woo is one of many handlers stationed at ports of entry across the country. She and her detector dog Phillip, pictured above, are part of what the Department of Agriculture coined the “Beagle Brigade.” Woo and two other handlers use dogs to sniff out incoming passengers at Dulles who may be bringing prohibited food items into the country. Her story illustrates what it takes to expand CBP's ag inspection force.

“What we are mainly looking for are fresh fruits and vegetables and meat products,” Woo said. This includes apples, mangos, citrus, beef, and pork.

CBP specialists have been brought into the ag spotlight in recently because of the outbreak of African Swine Fever began that has devastated China's swine production.

There have been 158 outbreaks of ASF in 32 Chinese provinces, according to the Food and Agriculture Organization of the United Nations. ASF does not affect humans, but over 1 million pigs have been killed since the outbreak, according to the FAO. The disease has also spread to parts of Europe.

Earlier this year, the National Pork Producers Council asked the Department of Agriculture to provide some 600 more inspectors at the ports to prevent the disease from entering the U.S.

Greg Ibach, USDA's undersecretary for marketing and regulatory programs, said USDA is working on training more officers and dogs to be present at ports of entry.

“We have taken time to look in ethnic markets where a lot of these prohibited products sometimes show up and to find, if there are some, how they got into the U.S., which has helped us put up a lot more resistance to those illegal products coming in,” Ibach said. 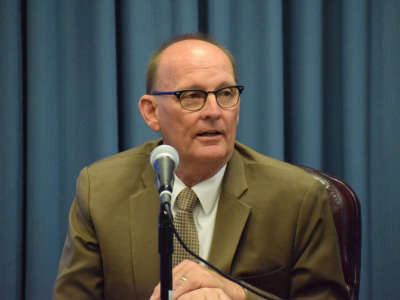 He also said the department and CBP work closely so inspectors understand which products and countries USDA is worried about.

“We’ve taken a lot of steps to try to put our defenses at the highest alert level,” Ibach said. Both the House and Senate have also introduced legislation to increase funding for more inspectors like Woo.

But becoming a K-9 handler isn’t just a walk in the dog park. Once selected, handlers must complete an intensive 10 to 13-week training course at the USDA National Detector Dog Training Center in Newnan, Ga., just outside of Atlanta.

“It was rather difficult,” Woo said, chuckling as she recalled her clumsiness. Other than helping other handlers back at the port, Woo said this was the first time she had really worked with a dog.

“Getting the dog to try to do what I want it to do and listening to me while I am trying to figure out what I am supposed to be doing ... there are a lot of moving parts that go into that,” Woo said.

Woo did not always want to work with dogs, but about five years ago —  after being an ag specialist with CBP for about five years —  she started to entertain the idea. However, she hesitated to apply for the program not because of her prior fear of dogs but because she had a daughter and family.

“Knowing that I was going to leave for two and a half months, it was a lot to think about,” Woo said.

But one of the handlers at Dulles retired and Woo started showing interest in the position. After her mother kept hearing her talk about it day after day, she pushed Woo to apply.

“It was one of the things that I thought very heavily about doing but wasn’t sure I’d ever get the opportunity to do it and it took me 10 years to get here,” Woo said.

Woo was in a class with five other inspectors ranging in locations from Miami to Honolulu, who had to work with nine dogs at the beginning of the training. Instruction mainly focused on how to take care of the dog, working with it and understanding the animal's body language.

“We had 100 bags or so and set up a couple of exercises in various designs and configurations on the floor, and loaded some of them with the target odor,” Woo clarified.

The dogs are then trained to paw at a bag or sit near it if they sniff an agricultural product. She said the training process requires a lot of patience because it has to be repeated day after day. Woo said some dogs were easier to work with than others.

“This other dog — I would have never been able to work him," Woo stated. “He was very excitable, he would run around, he wanted to sniff the floor before he sniffed all of the bags. He spun me in circles [and] tripped me up, I just couldn’t work with him.”

According to CBP, the officer and canine continue training at their home port to maintain skills. All the students are given a chance to work with all nine dogs initially to figure out which of the dogs they work best with. As the weeks go by, dogs are paired with specific students. Around the third week of the program, she was assigned a primary canine named Phillip, who now works with her at Dulles.

She said she and Phillip “work together pretty well” but are still fine-tuning a few things.