Senate GOP sets up battle with House over research agencies

Senate Republicans are moving a fiscal 2020 spending bill for the Agriculture Department that tees up a fight with House Democrats over the relocation of two USDA research agencies to the Kansas City region.

The bill, which the Senate Appropriations Committee will consider on Thursday, would provide $25 million that USDA requested to carry out the move of the Economic Research Service and the National Institute of Food and Agriculture.

The House-passed bill that funds USDA would instead prohibit Agriculture Secretary Sonny Perdue from carrying out the relocation, which the department started this summer.

“We understand that there is a concern (about the relocation) on the part of some people. We’ll deal with that the best we can,” said Sen. John Hoeven, a North Dakota Republican who chairs the Senate Agriculture Appropriations Subcommittee.

The subcommittee’s top Democrat, Oregon Sen. Jeff Merkley, objected to the funding provision. He said the relocation “would do irreparable harm to cutting-edge research agencies whose work the American agriculture industry relies on. I hope that we can work with our colleagues in the House to do better before a final bill is signed into law.” 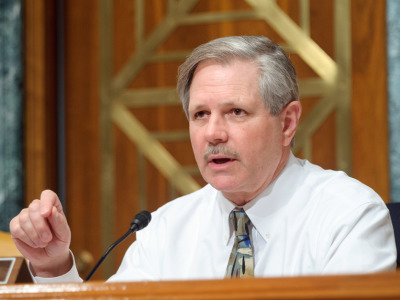 Senate Republicans are starting to rush the 12 FY20 spending bills through the Appropriations Committee this month so negotiations can begin with House Democrats, and the ERS-NIFA relocation will be among a long list of differences that will have to be resolved, including spending levels for departments and agencies.

The new fiscal year starts Oct. 1, but the House is expected to vote on a continuing resolution this week that would keep the government funded until Nov. 21 while the House and Senate negotiate the FY20 spending measures.

The Senate’s FY20 Agriculture spending bill, which would fund USDA as well as the Food and Drug Administration, was approved by the subcommittee on a voice vote. Spending for "discretionary" programs, those programs that are subject to annual appropriations, unlike farm bill programs and many nutrition programs, would be funded at $23.1 billion, slightly above the fiscal 2019 level.

The House-passed version of the bill is funded at just under $24 billion, not counting funding for the Commodity Futures Trading Commission. The House includes the CFTC in its version of the Agriculture bill, but the Senate funds the CFTC through its Financial Services bill.

In addition to the fight over the ERS-NIFA relocation, negotiators will have to resolve differences in funding levels throughout USDA and other agencies.

For example, the Senate bill contains no new funding for USDA's ReConnect loan and grant program for rural broadband projects, a Senate aide said, but the House version of the bill earmarks $550 million to the program in FY20. The program was created in 2018 and funded again in FY19.

The text of the Senate bill hasn’t been released, but summaries say it would provide $3.48 billion for agricultural research, $607 million above the amount President Donald Trump requested. The House bill would fund USDA research programs at $3.3 billion.

House Democrats want more funding for international food aid than the Senate bill would provide. The nation’s flagship food aid program, Food for Peace, would be funded at $1.72 billion under the Senate bill, compared to the $1.85 billion included in the House legislation, which would be a $350 million increase from FY19.

The White House has tried unsuccessfully to kill both programs.

The Senate bill also includes a provision directing USDA to implement a rule that would require USDA to modify the origin of livestock requirements for organic dairy cows. USDA has never finalized changes proposed by the Obama administration in 2015. The House legislation has a similar provision.

The bill includes $16.5 million in new funding for USDA to implement a new hemp production program that was required by the 2018 farm bill. The bill also includes $20 million for the new Dairy Business Innovation Program, which was authorized in the 2018 Farm Bill to support dairies hoping to diversify with on-farm processing and product marketing.

The Senate also is moving an Energy-Water bill that includes funding for water projects managed by the Army Corps of Engineers. The bill would increase the Corp’s operation and maintenance budget by $59 million above the FY19 level and provide $1.7 billion for harbor projects, $74 million above the target in the 2014 water projects authorization law. The FY20 bill also would make full use of the 2019 estimated revenues generated from the Inland Waterways Trust Fund.

The Commodity Futures Trading Commission would get a $6 million increase to $274 million in FY20 under the Senate’s Financial Services spending bill, which is moving separately from the Agriculture measure. The House wants $315 million for the agency in FY20.