On tap: $14 billion market for soil carbon and clean water

Farmers and ranchers could potentially earn up to $14 billion though a new market for improved farming practices that store carbon in the soil or curb water pollution, according to a study of a project backed by some agribusiness giants and food manufacturers.

The study conducted by IHS Markit (formerly Informa Agribusiness Consulting) for the Ecosystem Services Market Consortium identifies the value and likely buyers of credits that farmers and ranchers would generate.

The report estimates the ecosystem credits could be worth $13.9 billion, including $5.2 billion for storing carbon in the soil as a way to limit climate change. Those credits would be worth as much as $150 a ton to as little as $3.

There would be demand for another $4.8 billion in credits for keeping nitrogen out of water sources and $3.9 billion for doing the same with phosphorus, according to the study, which was released at a Farm Foundation forum on Tuesday.

The likely buyers include corporations, industrial or municipal operations that need to meet publicly stated goals on environmental impacts, shareholder and stakeholder expectations or regulatory obligations to improve the environment,” the study says.

The report “confirms ESMC's conviction that there is substantial demand for ecosystem services from farmers and ranchers,” said Debbie Reed, ESMC’s executive director. “ESMC is building a voluntary market to monetize those outcomes for producers, using science-based approaches to increase and measure soil organic carbon, reduce greenhouse gas emissions and improve water quality and water use efficiency," she says. 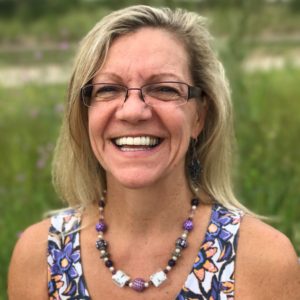 Joe Somers, an IHS Markit vice president who led the study, said food and beverage companies are the most likely customers for the credits, accounting for 57 percent of the estimated demand. “A lot of these companies are already working in the value chain and are very interested in what’s going on in the farming sector and food sector, and they want to participate with farmers,” he said.

A new carbon market would build on current incentives. Although ESMC aspires to create a national private market for sequestering carbon and countering water pollution, landowners have been paid to do those things for decades as co-benefits of state and federal conservation and pollution control programs, conservation easements sponsored by conservation organizations, land trusts, private companies and other public spirited entities.

In fact, efforts to price soil carbon started decades ago: notably the Chicago Carbon Exchange, which dissolved seven years ago.

“It’s been a long road for these market-based approaches (for carbon), trying to figure out how to scale them and generate prices for carbon that make it worthwhile to a farmer or rancher to engage,” Cohen said.

ESMC targets January 2020 as its market launch date. “If this coalition can crack that nut, I say more power to them. It will unlock new income streams for farmers and ranchers,” Cohen said.

“We’re getting better all the time,” he said of the scientists and other experts who design carbon pricing protocols. However, he says, the designs “are hard to nail down, and I think the real challenge is in the diversity of agriculture … the types of crops grown, soil types, the geography … and the impact of local conditions on all of these things.”

ESMC has already developed a pilot protocol for a soil carbon market for agricultural lands in Texas and Oklahoma, and it recently inked a $480,000 cooperative agreement with NRCS for writing comparable pricing recipes for four more regions, to be selected in the months ahead by ESMC members.

Reed suggested a protocol for the Northern Plains may be up next where “there’s a lot of interest in preserving the grasslands.” 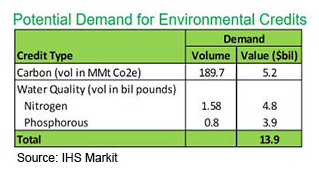 In the water quality credits market, the leading likely buyers will be municipal sewage and water treatment plants. Among all industrial and other treated runoff of nitrogen and phosphorus, “publicly owned treatment works (POTW) had the greatest discharges of nutrients, accounting for approximately 63 percent of nitrogen discharges and 94 percent of phosphorous discharges into all waterways,” according to the IHS Markit findings.

So, while many farmers may have reduced their own crop chemicals runoff, “POTW’s are ideal candidates for a credit marketplace, as many have dated infrastructure and their cost of compliance to remove the next pound of phosphorous can be very high,” the study suggests.

The study also looked at landowners’ breakeven prices for applying mitigation practices to store carbon and says they would vary sharply based on region and crop. For example, for converting conventional till to no-till, they’d range from an average of $21 per metric ton of carbon dioxide in the Northern Plains, and $29 in the Great Lakes states, to as high as $104 in the Corn Belt. So it’s suggested credit buyers would get the most carbon for the dollar in the Northern Plains and Lakes states.

Landowners would sell water quality credits, too, for reducing water pollution, and the study projects the tonnage of nitrogen and phosphorous runoff that could be purged or diverted by farmers to fulfill their credits. It notes the credits which would have to be bought and sold within the same watershed where the runoff occurs.

The credit program could potentially be combined with incentives from federal farm bill programs. ESMC “or the companies, or the carbon registries that are developing the protocols … make the rules for these markets,” and “they have said that folks generating carbon credits using federal funding like EQIP or CRP or anything that NRCS provides … can also generate carbon credits off those same practices.”

Paying farmers for reductions in carbon emissions has emerged as an issue in the 2020 presidential candidate.

Sen. Elizabeth Warren (D-MA), urges a “New Farm Economy,” calling for $400 billion for a “Green Manufacturing Plan” for “innovations for decarbonizing the agriculture sector, including a farmer-led Innovation Fund that farmers can apply to … new methods of sustainable farming, like agroforestry.”