Leaders of the three largest seed and chemical companies say it’s technologically possible to reduce farming’s environmental footprint while feeding a growing global population, but they worry policymakers and regulators will stand in the way.

“I'm completely convinced that we have all of the technology and innovation, either with us today, and are coming soon, so we can feed 10 billion people, probably on less land than we even have today,” said Liam Condon, president of Bayer’s crop science division.

“The big issue is will this innovation be allowed,” he continued.

Condon said there were three critical types of technology for increasing food production and reducing agriculture's environmental impact: gene editing for seeds; synthetic biology to enable microbes to help plants fix their own nitrogen, reducing the need for fertilizer; and digital tools to increase the use of precision agriculture.

Condon was speaking on a panel with fellow agribusiness executives, including CEOs of Corteva Agriscience and Syngenta, at the annual World Food Prize symposium in Des Moines, Iowa.

Another panelist, Chris Nelson, president and CEO of Kemin Industries, a global food ingredient manufacturer based in Des Moines, expressed concern that regulatory barriers would prevent farmers from increasing production sufficiently on a global basis.

“The problem is our political and regulatory institutions,” he said. The industry “can no longer sit by and only develop the technology.”

The Department of Agriculture has been struggling for years with how to streamline its regulatory process for biotech plants in order to accelerate the commercialization of gene-edited crop traits.

Biotech companies say the Trump administration's latest proposal to overhaul USDA's regulations would still slow the commercialization of many gene-edited products. But groups representing grain traders, food processors and restaurant chains have told USDA the changes would go too far and could lead to trade disruptions and undermine consumer confidence. 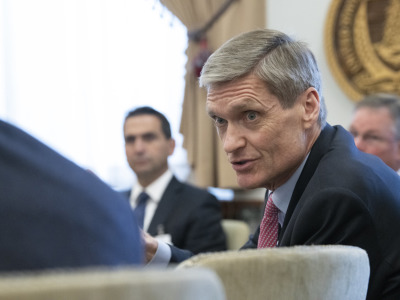 “But we need science-based regulatory processes around the world so we can keep bringing better and better technology to help farmers deal with climate change.”

He also said agricultural technology companies need to work together globally with farmers as well as food companies and consumers to increase yields and reduce waste with the goal to “be able to feed the world with less land.” That, in turn, will discourage deforestation, a major source of greenhouse gas emissions, and encourage planting of new forests, he said.

Syngenta on Tuesday announced the company would invest $2 billion over the next five years to help farmers deal with threats posed by climate change. The company's goal is to take to market at least two technological breakthroughs a year. Syngenta also pledged to halve the carbon intensity of its operations by 2030 to meet targets set by the Paris climate agreement.

Scientists say agriculture could play a major role in addressing climate challenges. A plan for addressing climate change published in the journal Nature Climate Change says land use and agriculture could become carbon neutral by 2040 and a net carbon sink by 2050 through changes in how crops and livestock are produced and by reducing deforestation and planting new forests. Increasing carbon sequestration on croplands could offset the entire greenhouse gas emissions of India. Restoring forests, drained peatlands and coastal mangroves in tropical countries would offset the equivalent of China's emissions, the study said.

Corteva CEO Jim Collins echoed the concern about regulatory barriers to biotechnology, but he also suggested that consumers need to be sold on its benefits.

Corteva and other companies want to “learn from some of the mistakes we made in the past around GMOs and GM technology,” he said, suggesting that one of the selling points of biotechnology is how gene editing crops could help reduce greenhouse gas emissions.

Corteva is developing a gene-edited variety of rice that can be dry-seeded, reducing methane emissions from rice paddies. The methane, one of the most potent greenhouse gases, is produced by bacteria in waterlogged fields.

Collins announced a $500,000 “Climate Positive Challenge” fund that Corteva will use to make payments for experimental practices that can reduce greenhouse gas emissions. The first grants will be made in 2020. Farmers who get the money will have to be willing to serve as “missionaries” to talk about their results to other farmers.

Collins said in an interview that Corteva is looking for farmers — he described them as “heroes” - to reward for early adoption of climate-friendly practices. It’s not clear yet how the farmer’s practices will be evaluated, but Corteva will probably use some outside consultants to review the growers’ results.

Corteva will be soliciting farmers outside the United States as well but hasn’t decided on how many grants will be made or how large they will be. The company wants to first see how much demand there is for the money and evaluate the applications, he said.