Seven questions for the president of the State Ag Board

Don Cameron had no farming experience 40 years ago. Appointed by Governor Jerry Brown, Cameron serves as president the State Board of Food and Agriculture, advising CDFA on policies and providing Sacramento with a voice for California farmers.

Cameron oversees operations at Terranova Ranch, a 6,000-acre farm near Fresno with a mix of 25 commodities in both conventional and organic. He was an early adopter of on-farm groundwater recharge for both the ranch and his own 900-acre farm, partnering with the nonprofit group Sustainable Conservation.

As a biology major, Cameron actually hoped for a career in wildlife management and took a job with UC cooperation extension in the meantime. He then worked as a pest control advisor before joining Terranova.

Today Cameron is often invited to deliver talks on agricultural policy and sustainability across the state, testifying twice to Congress as well.

He spoke with Agri-Pulse recently on the top concerns he hears from farmers, as well as on the growth of sustainable ag and the decline of the industry’s influence at the capitol.

The state has realized farmers are part of the solution to cleaning up our environment. It put money into on-farm sustainability programs to show growers they can farm while being profitable and also very sustainable.

We know farmland can sequester carbon. We don't just have to have field after field of production. But we can incorporate other parts of sustainability into our farm to make it really a richer place to be. We’re looking at farming as part of the solution to greenhouse gases, to carbon, to pollinator habitat.

There's just so much we can do together, rather than fighting each other all the time. The farmers have seen that, and the environmental groups have seen that, too. When we produce crops, we also produce an ecosystem on the farm that can be beneficial to others.

Everybody realized groundwater recharge could be a very good solution to help with sustainability for the aquifers.

With the Healthy Soils initiative, it's been a little slower. It incentivizes growers and gives them a chance to try different techniques on the farm that are going to be beneficial. The grower can talk firsthand to the researchers and see the benefits in their own area. You're going to see that become more prominent as we look forward.

We heard a lot about the Sustainable Groundwater Management Act (SGMA), which we anticipated. That's the issue facing growers definitely in the San Joaquin Valley but also in areas along the coastal Salinas Valley and the Paso Robles area near San Louis Obispo.

We saw a tremendous amount of interest in how growers are going to make corrections and where the funding is going to come from to build the infrastructure we need. 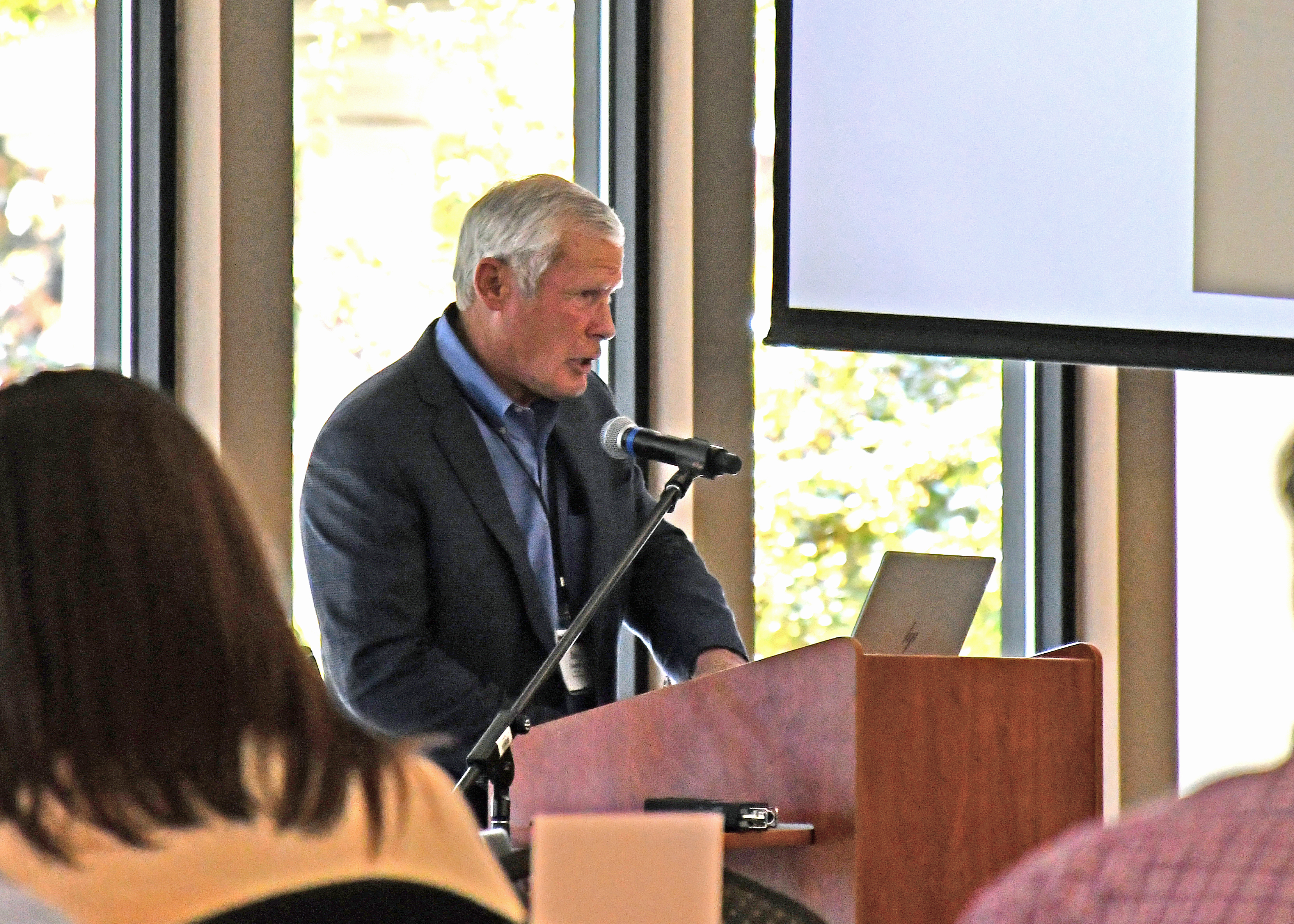 Don Cameron speaking at a forum on groundwater recharge.

There are definitely water-rich areas and water-poor areas.

We do see that there are local issues that long-term are going to hopefully be resolved. We need to work as a basin. There is more cooperation as we're getting closer to implementation.

You're talking about huge portions of the San Joaquin Valley taken out of production with idling. Our goal should be to keep as much land in production as possible. It not only affects the farmer; it affects the rural community.

The buy-in is important. As far as contentious issues, they always will be there when you talk about water.

Going back in time, agriculture had a stronger voice in Sacramento, and that's faded.

You have so many in the State Assembly and Senate coming from the largest cities. We need to bring them on to the farm and show them what our issues are.

We know we're not going to win every battle.

The overtime issue was contentious. I've got to go explain to my workers why they're getting paid less. We just can't pay the overtime and in the long run, it hurts the workers.

My guys aren't happy with it and other farmers tell me the same thing. I understand the social justice side of the of the issue that everybody should be on the same level. Unfortunately, agriculture is driven by a limited period for harvest for securing your crop. It's also becoming harder and harder to get the labor we need.

Brown tended to not be as engaged as Governor Newsom is, who has made a serious effort to bring the San Joaquin Valley into the conversation.

We see much better cooperation between Natural Resources, CalEPA and CDFA. The leadership at the top has focused on the agency's working together.

The State Water Board has streamlined some of the temporary permitting for flood water recharge. That's a real plus. That started with the governor listening to what we needed. Any delays are expensive and any way we can cut through some of the red tape and do some interagency work is going to be helpful in the long run.

We are going to visit the Salton Sea and get updated on their situation. We need to be involved and understand the intricacies of the area.

Another topic I hope to push this coming year is rural broadband internet, not just for farms but for the rural community. We're in desperate need of assistance out here. We're a hundred miles from Silicon Valley, and we have internet speeds that don't even get one megabyte per second. You're in the Stone Age with rural internet. The solutions aren't good or easy or inexpensive. I'd like to push to see if we can get some change at a higher level.