BeeWhere gains ground as neonic regulations appear on the horizon

A new phone app designed to address pollinator protection in the field is coming online just as state agencies consider tightening regulations around bees and pesticides and as state and federal lawsuits begin mounting.

In 2017, a coalition of stakeholders led by the California Association of Pest Control Advisers (CAPCA) and the County Agricultural Commissioners and Sealers Association (CACASA) began the BeeWhere initiative as a way to streamline communication about pesticide use between beekeepers and applicators. It works by updating farmers, pest control advisors and other pesticide applicators when beehives are present. The California State Beekeepers Association and the Almond Board of California have also been involved in the effort. The program launched a web-based mapping tool in early 2019.

“Enhancing communication between all users and protecting pollinators is critically important and BeeWhere is a mode to improve that,” said Sandy Elles, executive director of CACASA, in an interview with Agri-Pulse.

The portal provides an easier path for beekeepers to also meet the legal requirement for registering hives with the state. The industry has seen a lack of compliance with registrations since the original laws were passed in the 1980s. The state has also not been monitoring when beekeepers themselves use insecticides to protect hives from red imported fire ants, varroa mites and other deadly pests.

In July 2019, the program launched a free phone app called BeeCheck. It allows registered growers to access hive locations, contact beekeepers and send 48-hour notifications before applying products. This saves time in faxing or calling the local ag commissioner’s office during business hours to find out if any beekeepers put in a request for notifications.

The number of hive registrations was low to start. Pest control advisors, ag commissioners and staff from CDFA’s Bee Safe program ramped up outreach efforts and training sessions for the beekeepers remaining in the state over the summer. Those beekeepers began returning to the state in late fall for the next almond bloom. Now the number is up to 1,800 registered beekeepers covering about 650,000 honeybee colonies, according to CAPCA CEO and President Ruthann Anderson. 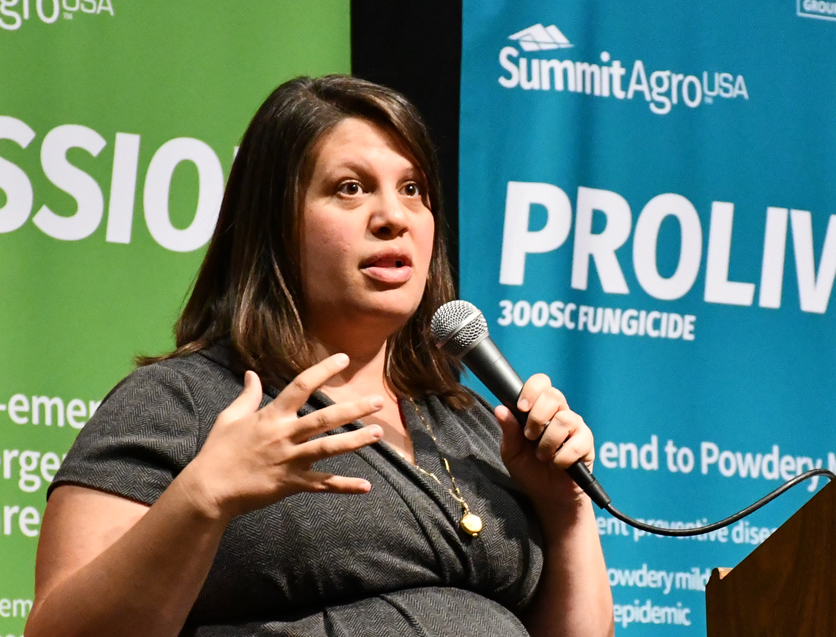 “It's huge compared with what we had,” she told Agri-Pulse.

The same number of hives are temporarily transported into the state each year to pollinate over 900,000 acres of almonds, a value of about $5 billion. California also has an estimated 740,000 domestic colonies – a gap the coalition and the California Department of Food and Agriculture are racing to close. With registration numbers rising, outreach efforts have also shifted back to the applicators to ensure they are performing the bee checks.

The program has come a long way in building trust between the grower and beekeeper communities, a relationship growing more strained as commercial bee populations steadily declined over the last decade. With real-time tracking, the tool provides more accountability for both sides and provide valuable information as regulatory agencies continue to evaluate the neonicotinoid, or neonics, class of insecticides, which has been blamed for the colony collapse phenomenon.

The Department of Pesticide Regulations is currently planning to adopt new mitigation measures on four prominent neonics by July. The new restrictions could impact nut, winegrape, citrus and berry growers. DPR issued a risk determination in 2018 that triggered the two-year deadline for adopting new regulations. That evaluation was based on bee toxicity and residue studies in pollen, nectar, and leaves from a selection of agricultural orchard and row crops.

The U.S. EPA took a different approach to its studies on those neonics and is expected to issue its final risk assessments soon. A lawsuit, meanwhile, led the EPA to cancel 12 neonic products in May. The Center for Food Safety also led a separate lawsuit in September against the US Fish and Wildlife Service over a decision to allow neonics to be used on national wildlife refuges.

In June, the California Fish and Game Commission opened up a new front in bee protection. It voted to advance a petition by environmental groups to list four native species of bumblebees under the California Endangered Species Act. The Department of Fish and Wildlife is undergoing a scientific review process to determine if the bees meet threatened status for classification. A coalition of farm groups filed a lawsuit in September contesting the commission’s decision, arguing the listing would harm the farming community. The department will deliver its assessment to the commission by June.

The state is also placing more enforcement, along with penalties, on beekeepers. A law passed in 2018 through Assembly Bill 2468 will levy fines of up to $1,000 on beekeepers who fail to register or update hive locations. A revision to that measure, passed through AB 450 in October, pushes the start date for that enforcement back to 2021.

The BeeWhere portal, however, arose as a more collaborative approach to the issue, avoiding the years-long cycle of regulation and litigation.

“Collaboration is always a positive effort,” said Elles. “In this case, we’ve had great input from beekeepers, from growers, from PCAs and from our state partners at (CDFA and DPR).”