FDA on mission to explain its animal biotech approval process

The Food and Drug Administration, facing increased criticism of its regulatory process for gene-edited animals, is mounting a new effort to defend its policies to farmers, researchers and developers, but the industry is backing the Agriculture Department's push to take over some of FDA's oversight role.

FDA regulates as animal drugs any intentional genomic alterations in animals, achieved through gene editing or older genetic engineering technologies, a position roundly criticized by the animal ag and biotechnology industries. The subject has gained more attention recently with statements from FDA defending its oversight role as necessary both for the safety of animals and humans.

“We haven’t announced most of them yet, but we’re going to have a series of meetings,” said Laura Epstein, senior policy adviser in FDA’s Center for Veterinary Medicine. FDA’s presentations will include case studies examining hypothetical products.

One of the primary goals of the presentations will be to explain the process and FDA’s regulatory intentions to farmers, an audience FDA acknowledges it has not “communicated with very much,” Epstein said.

“As a result, there’s a lot of confusion and misinformation out there about what we plan on doing,” she said. “We got word back that farmers seemed to think we’re going to require them to register them as drug manufacturers. We want to assure them that’s absolutely not the case.”

One meeting FDA will definitely be attending is the Large Animal Genetic Engineering Summit in Utah in June, said Heather Lombardi, director of FDA’s Division of Animal Bioengineering and Cellular Therapies.

FDA’s effort follows publication of a commentary in Nature Biotechnology by Steven Solomon, director of FDA’s Center for Veterinary Medicine, asserting the importance of “regulatory oversight of intentional genomic alterations in animals, even when the intended modification seeks to replicate a naturally occurring mutation.”

Solomon’s piece accompanied an FDA analysis on how the agency “was able to detect unintended alterations in genome-edited bulls,” Solomon said in a statement on FDA’s website.

The biotech and conventional animal ag industries have been pushing for years to get FDA to loosen its regulatory reins, arguing that FDA’s development of disease-resistant animals, for example, has been unduly delayed.

Agriculture Secretary Sonny Perdue made that point at USDA’s Agricultural Outlook Forum last week, stating at a press conference that USDA is "in the process of working with FDA currently to help divide up the responsibilities, hopefully with an agreeable type of consensual” memorandum of understanding with the agency over new breeding techniques. Perdue said FDA could handle oversight of “food animal breeding,” with FDA handling “any other animals.”

He pointed to the example of the nearly year-old agreement between USDA and FDA on cell-cultured technology, used to create meat that has been described as “clean” by supporters and “fake” by its opponents.

Under that agreement, the agencies said FDA would handle “cell collection, cell banks, and cell growth and differentiation,” with the Food Safety and Inspection Service overseeing “the production and labeling of human food products derived from the cells of livestock and poultry.” 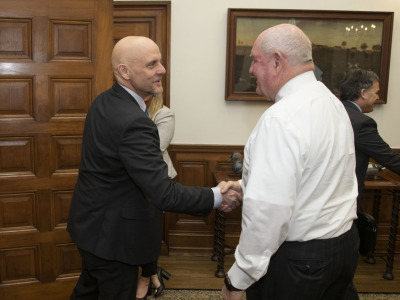 Without an easier path to commercialization, new breeding techniques “are going to go to Argentina, Brazil, Canada, China,” or other countries, Perdue said, making the U.S. “a follower rather than a leader in the new technologies.”

Representatives of both USDA and FDA were reluctant to discuss the interagency communications. A USDA spokesperson said only, “We are always in discussion with various FDA officials on a number of issues dealing with American agriculture.” FDA said the agency "continues to engage with our federal partners in the regulation of agriculture biotechnology products.”

Referring to USDA and EPA, its other participants in the government’s effort to “modernize” biotech regulations, FDA said “each agency has a role to play within its existing statutory structure.”

The description on the Flickr site doesn’t say what they talked about, but one longtime observer and participant in the animal biotech space said, “I would be shocked if they had not” discussed the issue. The meeting came two days after publication of Solomon’s commentary and the release of a statement from Hahn touting the potential of gene-editing technology for animals.

“It is paramount, however, that as we move forward, we maintain standards of safety and effectiveness,” Hahn said.

The Center for Food Safety agrees. “The FDA has scientists that better understand genetic engineering of animals given that it has been working for more than 20 years on both GE animals for research purposes and drug testing, and now GE animals for food,” CFS Policy Director Jaydee Hanson said.

USDA, he said, “has refused to develop regulations for its review of GE animals and insects, despite having agreed to do so in 2011 after a review by its own inspector general.”

Perdue’s suggestion of an MOU was welcome news to the biotech community. Dana O’Brien, the Biotechnology Innovation Organization’s executive vice president of food and agriculture, called Perdue’s words “encouraging.” In an opinion piece posted on Agri-Pulse’s site Feb. 12, O’Brien said BIO had shown the White House “how the President could move animal biotechnology oversight to USDA — an approach championed by key livestock and scientific stakeholders.”

“I’m all for it,” Acceligen CEO Tad Sonstegard said of Perdue’s remarks supporting a division of responsibilities. Acceligen is a subsidiary of Recombinetics, which uses gene editing to develop animals for the agriculture and biomedical markets.

“I agree with what BIO said,” Sonstegard said. “We need to get FDA to come to the table.”

Jack Bobo, a food industry consultant who is a former vice president at biotech company Intrexon, said Perdue’s statement may lead to “things moving a little more quickly” on the animal biotech front. However, he added, “It’s not clear to me that this is a detailed proposal.”

AquaBounty developed a genetically engineered salmon that was approved by FDA in 2015 after a 20-year review process - the only GE animal to be approved thus far. Sold in Canada since 2017, the fish will be available commercially in the U.S. later this, year according to Aquabounty.

“Their record stands for itself — one approval,” Sonstegard said.

But FDA wants to improve its process. It is touting its Veterinary Innovation Program, which Hahn said encourages “development and research and supporting an efficient and predictable pathway to approval.”

The latest developments on the animal biotech front were triggered by FDA’s publication of a paper detailing its discovery of unintended alterations in the progeny of a gene-edited, hornless bull. That paper was published in Nature Biotechnology the same day as the commentary by FDA’s Solomon.

The bull was developed by Recombinetics and its calves were monitored by Alison Van Eenennaam, who runs the Animal Genomics and Biotechnology Laboratory at UC-Davis. 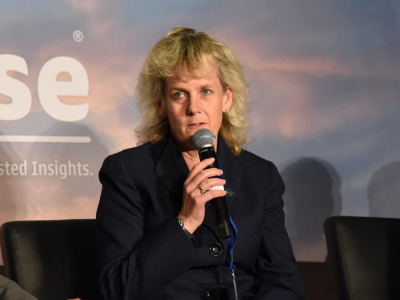 Van Eenennaam responded to the FDA paper and commentary by saying she was "disappointed that the FDA failed to mention that the genome-edited bulls and their offspring were followed for years by researchers at UC Davis and were hornless (polled) and healthy.”

The unintended alteration, a plasmid, “was not transmitted to half of the offspring, so in one generation there were animals with just the targeted edit,” she said, then wondered why her explanation of the project, also published in Nature Biotechnology back in October, was not referred to in FDA’s analysis.

Alexis Norris, a bioinformatician in FDA’s Division of Animal Bioengineering and Cellular Therapies, said there was no deliberate attempt to ignore Van Eenennaam’s paper. FDA submitted its paper to Nature Biotechnology “before hers was released,” she said. “Hers was in revision when ours was submitted to Bio. It was just a timing issue.”

Van Eenennaam has been critical of FDA’s process. “There is nothing fundamentally hazardous about genetic variation in food, and suggesting intentional alterations are equivalent to drugs will frighten consumers who might logically infer the presence of drugs in their food,” she wrote on the Nature Research Bioengineering Community blog in a piece entitled “Responsible Science Takes Time.”

"It's just DNA, man," said Sonstegard. “We eat it in every food except vegetable oil.”