Harder wants an ag member on the Coronavirus Task Force

He said in a statement: “We need an advocate on the Task Force who understands what our ag industry is concerned about and can make sure their needs, and consequently our country’s needs, are met.”

California Farm Bureau President Jamie Johansson agreed, saying this would ensure everyone in the food distribution system maintains the resources they need.

Keep in mind: During a press briefing on Sunday, President Trump announced that he expects the peak of coronavirus deaths to likely be reached in about two weeks and he will extend social distancing guidelines until April 30. He described his earlier Easter target date as “just an aspiration.” 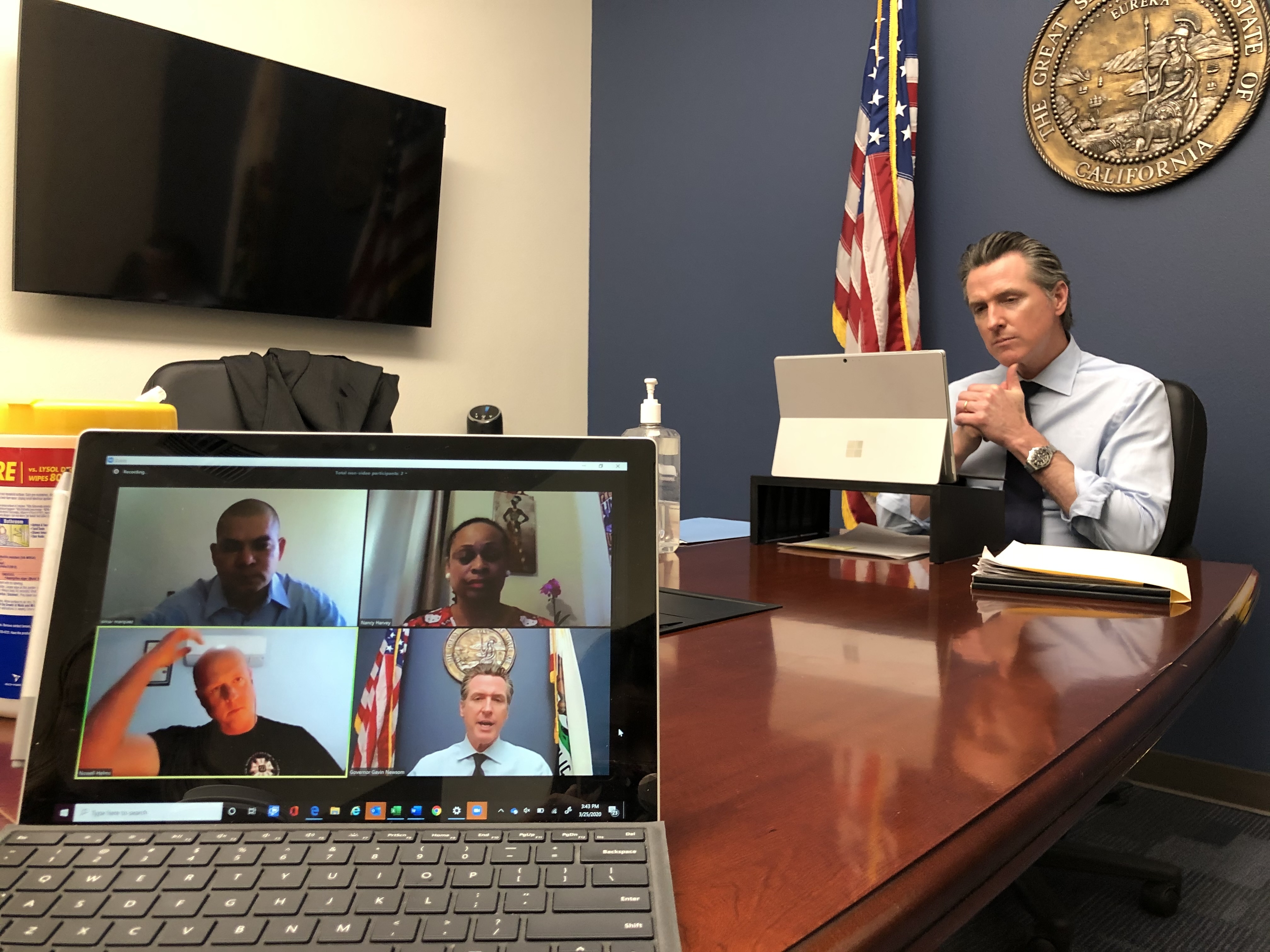 Sheltering in place is changing how Gov. Newsom engages with the public, including in this call last week with homeowners who were financially impacted by the outbreak. (Governor’s office)

What to expect after a dry winter

The state is nearing the end of its wet season and, after a “flatline February,” hopes for a “March miracle" have dwindled to a “March meh,” as climatologists are dubbing it. The state is now at about 50% of average for its precipitation and snowpack.

As a result, Sacramento Valley runoff will be greatly reduced this year, with other basins dry as well, according to Jay Lund, a water engineering professor at UC Davis, in a blog post Saturday. Prior winters have led to more soil moisture and surface storage, while recovering some of the groundwater supplies following the last drought. This means the greatest impacts would come next year if the state experiences another dry winter, reports Lund.

He added that the probability of this being the first of several years with dry conditions is slightly more than 50%. He recommended water users and managers prepare for that outcome.

“Also prepare for next year to be wet and have flooding, because this can easily happen too,” he writes.

Positive signs in California’s economy before the outbreak

With the federal stimulus package and a return to “some degree of normalcy within the next couple of months,” the economic impacts could be somewhat temporary, according to an analysis released Friday by Beacon Economics and UC Riverside. If consumer purchasing remains low through summer, however, the consequences could be worse.

“We can take some comfort in the fact that the state’s economy entered this downturn from a position of unparalleled strength,” said Taner Osman, a researcher with the consulting firm.

Several Central Valley cities, for example, experienced strong job growth over the prior year, according to the report. Yuba also experienced economic growth of more than 8%, while Madera and Bakersfield followed at about 3%.

President Trump on Friday signed into law a $2 trillion economic stimulus package that includes $23.5 billion in aid to farmers and ranchers as well as marketing loan relief.

The Western Growers Association said the emergency funding for specialty crop producers, as well as the small business loans and tax relief in the measure, “will help ensure our farmers and their employees can continue being the food heroes we need them to be.”

The State Department’s move to expand H-2A interview waivers has gone a long way to easing the industry’s concerns about having an adequate workforce this year. The concerns grew out of the State Department cuts in embassy staff as a result of the COVID-19 pandemic.

“With every adjustment and expansion of interview waivers we get closer to being OK,” said Veronica Nigh, an economist with the American Farm Bureau Federation.

Around 90% of H-2A workers came from Mexico. The State Department’s interview waivers will smooth the way for many of them.

CDFA Sec. Karen Ross praised USDA for streamlining the process. “Sec. Perdue understands the challenges that farmers across the country, and especially in California, face as the work continues to plant and harvest our crops,” she said.

Keep in mind: There are other issues. About 1% of H-2A workers come from South Africa, and the U.S. consulate is shut down because of the South African government’s 21-day moratorium on movement. Another 2% of workers come from Jamaica and 1% from Guatemala. Arranging travel “has proved challenging in the short run, but that should get sorted out,” Nigh said. 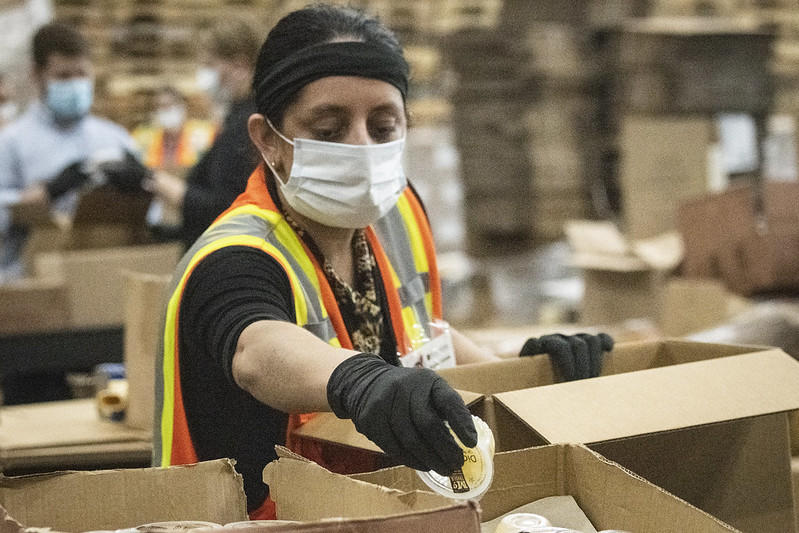 Now that President Donald Trump has signed the historic $2 trillion economic relief package into law, work is turning toward getting the money out as quickly as possible. “This doesn’t do anybody any good if it takes a long time,” Treasury Secretary Steven Mnuchin said on CBS Face the Nation on Sunday.

Mnuchin indicated in interviews that the new Small Business Administration’s forgivable loan program could be ready by Friday and direct payments to individuals could be deposited within three weeks. For individuals without direct deposit information, there will be a web-based app for getting the money, Mnuchin said.

Keep in mind: We’re waiting for word from USDA on how the $23.5 billion in farm aid that’s included in the bill will be distributed.

The Federal Communications Commission is freeing up spectrum in nearly 30 states to improve connectivity across rural America as more people telework from home.

“Fixed wireless broadband providers deliver this service for many communities, especially those hardest for other providers to reach,” FCC Chairman Ajit Pai said.

He said giving companies access to the lower 45 megahertz of spectrum in the 5.9 gigahertz band will help them meet their customers’ needs. The FCC granted access to 33 wireless internet service providers for 60 days through a special temporary authority.

Despite the turmoil in the farm economy and the U.S. economy more broadly, there’s no sign yet that the COVID-19 pandemic is having an impact on land values, says Nate Kauffman, lead economist for the Kansas City Fed.

But he says the pandemic is contributing to market volatility in markets such as cattle, similar to what’s happening in other markets due to the plunge in oil prices.

Speaking on a University of Illinois Farmdoc webinar, Kauffman said there’s no sign yet this year of a pickup in lender-encouraged farm liquidations this year. That “still has remained relatively low, particularly in comparison to what we observed in the 1980s,” he said.

President Trump has firmly denied reports that he plans to suspend tariffs on Chinese imports, which are responsible for spurring retaliatory tariffs on U.S. agricultural imports.

Trump suggested part of the reason may be that Chinese President Xi Jinping isn’t asking the U.S. to lift the tariffs. Trump and Xi spoke for about an hour Thursday night.

“Everyone keeps saying ‘Are you going to suspend the tariffs?’” Trump said emphatically at a press conference on Friday. “Well, the answer’s no, but President Xi never even brought it up last night. It wasn’t even discussed. It’s fake news.”

However, Trump stressed that he and Xi did talk about trade and China’s purchase of U.S. farm commodities. China is extending exemptions to some of its retaliatory tariffs for some importers that are buying corn, wheat, soybeans and sorghum.

USDA’s Natural Resources Conservation Service is giving the public a month to comment on changes to 49 conservation practice standards ranging from aquaculture ponds to vegetative buffers to well decommissioning.

Conservation compliance rules require producers cultivating highly erodible lands to farm according to an approved system or conservation plan. The requirements apply to crop insurance participation as well as commodity and conservation programs.

NRCS said it had updated the standards to incorporate new technology, enhance water conservation practices such as irrigation, and address wildlife issues.

“As we’ve seen some of the grocery store shelves being emptied, and as you have consumers worried about stocking up and making sure they have food to feed their families, it really underscores the need and importance of U.S. agriculture and the whole supply chain,” – Deputy Agriculture Secretary Steve Censky on this week’s Agri-Pulse Open Mic interview.

Listen to the whole interview here.