Can the Corn Belt become a seafood powerhouse?

Amid the flat plains of Iowa's corn and soybean fields, near the intersection of state Highway 20 and Interstate 35, sits a building that looks like a greenhouse just shy of four acres in size. But inside, you won't find plants or flowers growing. Instead, you will find 48 production tanks filled with tilapia for Eagle's Catch, an aquaculture farm in Ellsworth, Iowa.

Joe Sweeney is the co-owner of the business, which he says is on track to become the largest commercial aquaculture farm in North America and could serve as a model for other potential facilities in the Hawkeye State.

“We think Iowa will become the number one seafood-producing state, little ol’ land-locked Iowa. How cool will that be?” said Sweeney.

In 2018, there were 2,932 aquaculture farms with sales in the United States, with the top states being Mississippi, Washington, Louisiana, Virginia, and California. But Sweeney says the Midwest brings a competitive edge to aquaculture production.

“There is a really big opportunity here because of the rural municipalities," he said. "We have a high water table, we have a regulatory body that is supportive of growth and supportive of animal agriculture and wants to see these rural economies succeed, and on top of that, we’ve got people here in the Midwest that understand what it takes to make a commodity and become world class at it.”

However, producers in the South claim Midwesterners don't have the capacity or infrastructure to surpass their aquaculture production.

Chris McGlawn, owner and producer of Delta Cat Fisheries located in the Mississippi Delta — the heartland for catfish farming — has 10 one-acre man-made ponds where his family's operation is based. The industry average for one of those one-acre ponds is roughly 8,000-9,000 pounds of catfish per growing cycle, which can take anywhere from 18-24 months.

While Sweeney may be optimistic about Iowa's aquaculture growth potential, McGlawn pointed to the established infrastructure built in the South and the industry that surrounds it.

"In my opinion, it seems very unlikely," McGlawn said of Iowa eventually claiming the nation's top spot, pointing out that Iowa tilapia is raised indoors in recirculating systems. In Mississippi, catfish are raised in outdoor water beds. "I can't tell you if they will or not, I just don't see it happening."

McGlawn and Sweeney both mentioned the biggest competition for the catfish and tilapia industry still comes from overseas.

According to the National Oceanic and Atmospheric Administration (NOAA), between 85% and 95% of the seafood consumed in the United States is imported.

“Our biggest competitor is going to be imports from China and Vietnam. We have gotten that down a lot lower from what it was five years ago but still have a ways to go,” said McGlawn.

Another common thread between catfish farmer McGlawn and tilapia farmer Sweeney is their demand for soybeans in the ration for their fish. It's part of the reason Sweeney sees Iowa as attractive for expanding aquaculture. 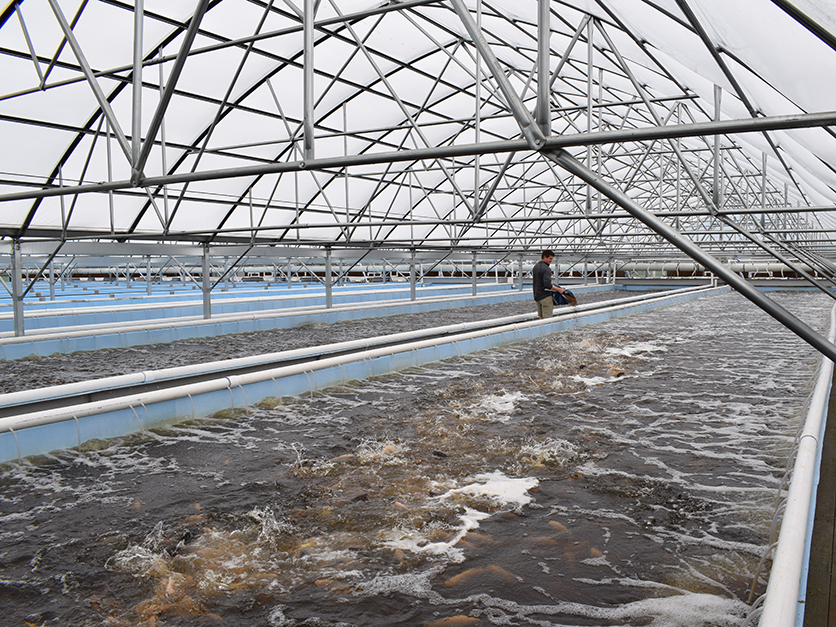 “There is a lot of opportunity here because there are a lot of soybeans growing here. … What we are doing is adding value to what is already being grown here in the ground,” Sweeney said.

While the soybeans may be in Iowa, the processing to turn them into feed is not. Eagle’s Catch gets its fish feed from Louisiana, making up two-thirds of the company’s production cost.

“A year from now, we will be going through 10 tons of fish feed a day; this farm will feed about 60,000 bushels of soybeans a year," Sweeney said. "All our feed ingredients are right here in Iowa, why can’t we make the feed here?”

"Typically, feed mills are located close to production facilities because it’s usually more economical to ship raw materials to the plant than finished feed to the production site. Right now, aqua feed demand in the Midwest does not support aqua feed production in the Midwest," Burke said.

Supporting his claim that the South has an established aquaculture industry because of the established infrastructure, McGlawn says there are two feed mills near his operation. “We are 6-7 miles away, tops. I'm sitting here looking at [the feed mill] now.”

In a research study conducted by the Soy Aquaculture Alliance (SAA), U.S. aquaculture production accounted for about 8.6 million bushels of soybean demand in 2018. Catfish production makes up just shy of 90% of aquaculture's soybean demand; farmed trout take the second spot, and tilapia comes in third at about 195,000 bushels.

SAA Executive Director Andy Tauer says the challenges of processing the soybeans go beyond the logistics of transportation and refining; different customers also have different needs.

“One of the things that is challenging in the aquaculture space is globally, we're culturing about 5,000 different species of fish. And so, in many cases, each of those different species has different nutritional requirements,” Tauer said.

Different species also need higher amounts of soybean meal in their diets. For instance, 35% of catfish and tilapia diets utilize soybeans compared to much lower figures for salmon (8%) and sturgeon (3%).

U.S. seafood demand also presents a challenge for the budding aquaculture industry. According to NOAA, the average American consumed 16 pounds of seafood in 2017. The Dietary Guidelines for Americans recommends eating at least 8 ounces of seafood per week, about 26 pounds per year. Closing that 10-pound gap would add demand for an industry looking to claim a larger share of the American diet.

“I think what hurts a lot of the home cooking is when people cook fish and they either don't cook it right or it doesn't taste right and then they never try it again,” said McGlawn.

“Seafood is extremely easy to prepare, but I think people are a bit hesitant in their own kitchens,” said Paul Zajicek, executive director of the National Aquaculture Association. “Everyone's comfortable with grilling a steak, fish not so much. But I think that comfort level is being improved with some really great resources out there.”

A combination of increased seafood education and more established infrastructure could help the aquaculture industry and soybean industry grow and expand.

“At the end of the day we want to find new markets for our products. Aquaculture has a real opportunity to grow in the U.S. Building together is a great opportunity for us both,” said SAA board president Jerry Bambauer.