Even as congressional Democrats push through a $1.9 trillion economic stimulus package, attention is turning to legislation that could potentially be used to fund agricultural climate initiatives: an infrastructure package that could be in the range of $3 trillion.

However, there are already concerns that the partisanship around the stimulus bill could make it harder to pass a climate-infrastructure bill, which will be needed to enact President Joe Biden’s Build Back Better agenda.

At this early stage, it’s also far from clear what exactly would be in the package for agriculture, or for just about anything else, though it would almost certainly include new funding for rural broadband. Also unclear is whether there might be a separate tax package that would include climate-related incentives.

Senate Majority Leader Charles Schumer, D-N.Y., said Tuesday that the Senate would turn soon to writing a broad bill that would include "big infrastructure" provisions. "It should be green," he said. He provided no details of what would be included.

Biden’s Build Back Better plan envisions significant new funding for agricultural conservation measures, and Senate Agriculture Chairwoman Debbie Stabenow, D-Mich., also has indicated that she is eyeing a climate bill to put new money into farm bill conservation programs. “We can’t wait for the next farm bill in 2023,” she told reporters last month. She has not said how that money should be spent.

Farm groups say they are largely in the dark about Democrats' legislative plans. But Democrats would risk losing agricultural support if they don’t work with Republicans on a climate package, and opposition from farm groups helped sink the Obama administration’s attempt in 2009 to address climate change from a cap-and-trade bill.

“We’re not going to support anything meaningful in this space that’s not bipartisan,” said Andrew Walmsley, director of congressional relations with the American Farm Bureau Federation. “It needs to have longevity, and you only get to that with bipartisan signoff.”

Democrats are using the budget reconciliation process to pass the $1.9 trillion stimulus bill because it allows them to get the bill through the 50-50 Senate without needing any GOP votes. Under normal procedures, it requires 60 votes to pass a bill in the Senate. Democrats haven’t said whether they would try to use the reconciliation process to pass their climate initiatives, but if they do they’ll have to wait until the 2022 budget year, which starts Oct. 1; reconciliation can only be used once each fiscal year.

AFBF is a co-founding member of the Food and Agriculture Climate Alliance, a coalition that is spearheading the sector’s lobbying effort on climate policy. FACA’s policy proposals include several that require significant new funding, including a one-time payment for early adopters of conservation practices and a possible new tax credit for carbon sequestration measures.

No funding amounts are spelled out in the FACA proposals. AFBF is one of 22 groups on FACA's steering committee, 14 of which were added this week. Several conservation groups are participating, including the Environmental Defense Funds and The Nature Conservancy.

One way some lawmakers believe they could smooth the passage of a climate/infrastructure bill is by restoring the ability of senators and House members to “earmark,” or designate spending for, specific projects in their states and districts. Earmarks have been banned for 10 years.

Senate Majority Whip Richard Durbin, D-Ill., told reporters he was confident a giant infrastructure bill could get the 60 votes necessary to pass the Senate if lawmakers are allowed to earmark projects. “We can create much more bipartisan appropriation bills and infrastructure bills with earmarks,” he said.

Sen. Susan Collins, R-Maine, also supports earmarking, though she said the names of lawmakers who are sponsoring the funding should be disclosed.

Another unanswered question for the climate/infrastructure bill is how, and to what extent, the cost would have to be offset by tax increases or other measures.

Danielle Beck, senior executive director of government affairs for the National Cattlemen’s Beef Association, said on an NCBA briefing Tuesday that an infrastructure bill could be introduced this spring, and her group is concerned about potential tax provisions that could be attached, including Biden’s proposal to eliminate the step-up in basis for inherited assets. Under current law, capital gains taxes on the sale of inherited property are based on its value at the time of death rather than when the asset was originally acquired.

A climate/infrastructure bill is one of at least three major funding mechanisms for ag climate initiatives on which FACA is focused. The other two: the annual appropriations process and USDA’s Commodity Credit Corp. spending authority. 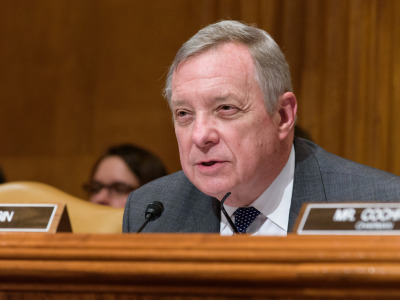 According to representatives of FACA-affiliated groups, the coalition is going to try to use the appropriations process to fund needs such as increased agricultural research, soil sampling, and a survey of existing on-farm energy production, including methane digesters.

USDA, meanwhile, is looking at using CCC funds to set up an ag carbon bank that could buy and sell ag carbon credits. USDA officials have not discussed the size of the program, but USDA could have as much as $10 billion or more available in the CCC each year depending on the amount that must be spent on other priorities, such as making commodity program payments and funding commodity marketing loans. USDA's CCC authority is capped at $30 billion.

Meanwhile, cutting money from farm bill commodity programs to fund ag carbon measures would be a non-starter with AFBF as well as many — if not most — other farm groups. “That hasn’t been on the table, and that’s not something that we would support,” Walmsley said.

Rob Larew, president of the National Farmers Union, another FACA member, stopped short of ruling out supporting some shift in farm bill funding. “Certainly, it would make us very nervous. If we're talking about taking money out of one pot to fill up another, we'd want to know exactly what that looks like and why.”