The House this week is expected to clear President Joe Biden’s $1.9 trillion American Rescue Plan after Senate Democrats fought off GOP attempts to gut the package in a marathon debate that went all night Friday to nearly noon on Saturday.

Among the provisions GOP senators targeted was the provision that would provide direct payments to minority farmers who hold USDA direct or guaranteed loans.

Take note: Minority farmers could receive payments worth up to 120% of their indebtedness on direct or guaranteed USDA loans. The additional 20% is intended to pay off the taxes the farmers would owe on the payments. The Congressional Budget Office estimates that 15,000 farmers would claim the payments and get an average of about $222,000, according to a source familiar with the CBO score.

The Senate made a slight change that could allow USDA to cap the payments: The original House version said the payments must be "equal to" 120% of the indebtedness. The Senate changed that to "up to" 120%. A USDA spokesman said the department didn't ask for the authority to cap payments but said USDA would work with the language in the bill.

Read more about the Senate debate and the stimulus package here.

The idea that USDA will set up an ag carbon bank to buy credits may not be a done deal. Senate Ag Chairwoman Debbie Stabenow told Agri-Pulse she hopes to use a hearing this week to hear recommendations from farmers on how the government should encourage climate-friendly practices.

And she cautioned against assuming a carbon bank would be in the mix.

USDA’s top climate adviser, Robert Bonnie, has proposed the carbon bank as a way to guarantee the prices farmers would get for credits.

“There is no one definition of a carbon bank. That has been dubbed as a thing,” she said. “It could be putting more money into conservation. It could be USDA matching dollar for dollar the value of the carbon credit that farmers get.”

Read our Washington Week Ahead here.

USDA’s inspector general is looking into what the government did to protect its meat inspectors and to keep packing plants operating during the COVID-19 crisis.

In a letter to Sen. Michael Bennet, D-Colo., the IG says the investigation will include a look at what actions USDA took after then-President Donald Trump issued an executive order in April 2020 widely characterized as authorizing the department to use the Defense Production Act to keep plants in operation.

Investigators also will look at whether inspectors had adequate protective equipment and access to COVID-19 testing as well as what actions the Food Safety and Inspection Service took to communicate federal standards and expectations to state health officials. 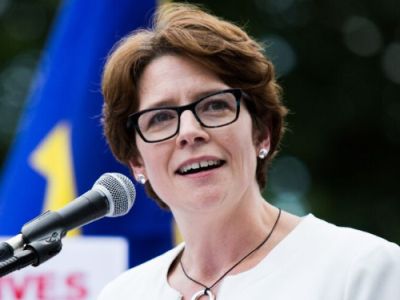 The Food and Drug Administration says it will implement a plan soon to reduce toxic elements in foods for babies and toddlers “to levels as low as is reasonably achievable.”

FDA also sent a letter Friday to baby food manufacturers reminding them of their responsibility under a 2015 rule “to consider chemical hazards that may be present in foods” when conducting hazard analyses.

The action comes after a House subcommittee released a report in February concluding that “baby foods are tainted with dangerous levels of inorganic arsenic, lead, cadmium, and mercury” and “industry self-regulation fails to protect consumers as manufacturers set their own dangerously high internal standards for toxic heavy metal levels.”

Quick reaction: The American Academy of Pediatrics praised FDA’s announcement but said it “marks only the beginning of the comprehensive actions our government must take.”

“We urge FDA to work closely with the U.S. Department of Agriculture to reduce the levels of toxic elements in baby and toddler foods, promote food safety, and promote transparency and trust for parents and caregivers,” AAP President Lee Savio Beers said.

Producers now have until April 9 to sign up for the Quality Loss Adjustment program, which offers aid for crop quality losses due to qualifying natural disasters such as hurricanes, flooding or drought in 2018 and 2019.

FSA extended the deadline from March 5 to give growers a way other than paperwork to demonstrate the price they received for grain sold to the feed market, as well as show quality losses.

Since quality loss conditions were so widespread, especially in the Northern Plains, elevators were not documenting them, Farm Service Agency Associate Administrator Steve Peterson said.

FSA has “eased up” on that requirement, Peterson told Agri-Pulse, “and if they are willing to work with their elevator, they could still maintain eligibility and access to the program.”

Over 8,100 producers have signed up since FSA began taking applications Jan. 6.

China will remain Brazil’s largest foreign market for poultry in 2021, with Brazilian exports to the country expected to increase to meet rising demand, according to a new analysis from USDA’s Foreign Agricultural Service.

“Exports will represent 28 percent of all chicken production in Brazil and increase four percent in 2021,” FAS analysts stationed in Brasilia said in the report. Brazil is the world’s largest chicken meat exporter.

Brazil is now predicted to export about 3.9 million metric tons of chicken in 2021, up from 3.7 million tons in 2020, as it increases shipments to China and the Middle East.

There’s a zap for that

Researchers at the Japanese Shibaura Institute of Technology say they have developed a new and contactless method to tell if soft fruits like mangoes are ripe enough to pick.

All you need is a pulse laser, a series of mirrors and lenses and machines to create air cushions and measure vibrations to produce “an innovative method to measure fruit firmness using laser-induced plasma shockwaves,” the Shibaura Institute says.

The system isn’t ready for wide-scale use yet. But the researchers say that “with any luck,” adoption of the technology “will ensure that fruits reach your plate only when the time is ripe!”

He said it: "The American Rescue Plan is historic for other reasons, namely for the transformative debt relief it provides to Black, Indigenous, Hispanic, and other farmers of color. For generations, socially disadvantaged farmers have struggled to fully succeed due to systemic discrimination and a cycle of debt.” — Ag Secretary Tom Vilsack reacting to Saturday’s passage of coronavirus relief legislation.