Michael Regan is officially in place as administrator of the EPA after being sworn in Wednesday by Vice President Kamala Harris. The ceremony took place shortly after another nominee who had strong backing from farm groups, Katharine Tai, was confirmed by the Senate 98-0 to be U.S. trade representative.

Tai’s Senate testimony suggest she’s likely to focus first on implementing the U.S.-Mexico-Canada Agreement, the trade pact she played a major role in crafting during her time as the top Democratic trade lawyer for the House Ways and Means Committee.

Tai told senators that USMCA “represents an important step in reforming our approach to trade. We must all continue to prioritize its implementation and success.”

Tai was also quick to mention China and the challenges it presents, saying she knows “firsthand how critically important it is that we have a strategic and coherent plan for holding China accountable to its promises and effectively competing with its model of state-directed economics.”

By the way: Explaining his vote for Tai, Sen. Rick Scott, R-Fla., told reporters that former USTR Bob Lighthizer spoke highly of her, and that she “committed to hold Communist China accountable.”

Another big China corn purchase ahead of today’s bilateral

China’s second straight daily purchase of more than a million metric tons of U.S. corn was well-received by American farmers on Wednesday, but Lesly McNitt, director of public policy and trade for the National Corn Growers Association, tells Agri-Pulse that the group is now focused on the long-term goal of stabilizing the U.S.-China relationship.

While the separate Chinese purchases of 1.224 million metric tons of U.S. corn Wednesday and 1.56 million tons Tuesday are based on demand, McNitt said she believes the timing may have been a goodwill overture to the U.S. ahead of bilateral meetings that begin today in Alaska. 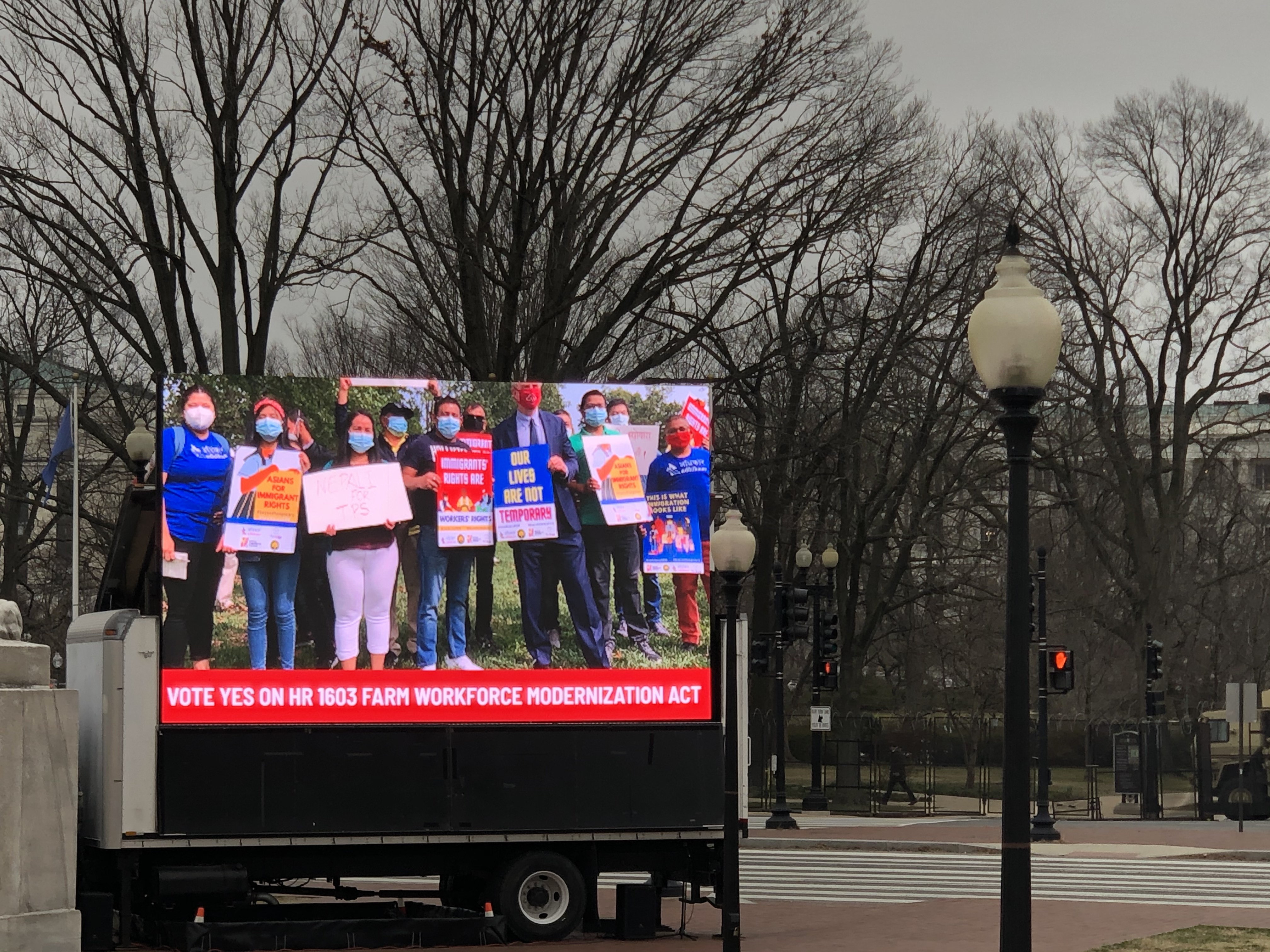 A billboard promoting the Farm Workforce Modernization Act near the Capito on Wednesday.

The House is set to vote today on the Farm Workforce Modernization Act, which would reform the H-2A visa program and provide a path to legal status for undocumented farmworkers. The bill would change the way H-2A pay rates are calculated and authorize a limited number of visas for year-round workers.

We’ll be watching to see if the bill gets more than the 34 GOP votes it received in 2019. The U.S. Chamber of Commerce is joining the United Fresh Produce Association in hosting a press call today to promote the bill.

There’s a sharp divide among broadband advocates over whether the federal government should raise speed standards. That disagreement came out at a Senate hearing Wednesday where Christopher Ali of the University of Virginia called for increasing download and upload speeds to 100 megabits per second, citing the needs of precision agriculture.

Farmers “are uploading terabytes worth of data and doing an incredible amount of soil analysis, oftentimes in real time,” Ali told the Senate Commerce Committee.

But former Federal Communications Commissioner Mike O’Reilly said precision ag data does not have to be transferred at the same time, and that the rates of 25 megabits per second download and 3 Mbps upload have “been incredibly functional.” The FCC has a minimum service benchmark of 25/3Mbps.

A new Climate Risk Unit at the Commodity Futures Trading Commission will examine the role of derivatives in the transition to a low-carbon economy. CFTC Acting Chairman Ross Behnam said “climate change poses a major threat to U.S. financial stability” and said the CFTC needs to “assertively” use its “wide-ranging and flexible authorities to address emerging risks.”

Behnam was behind a report issued last fall by the agency’s Market Risk Advisory Committee that looked into the risks of climate change to the financial industry.

Financial markets “will only be able to channel resources efficiently to activities that reduce greenhouse gas emissions if an economy-wide price on carbon is in place at a level that reflects the true social cost of those emissions,” the report said.

The federal government needs to increase its use of internships, fellowships and other programs to bolster agencies’ dwindling scientific expertise, the House Science Committee was told Wednesday.

Max Stier, CEO of the Partnership for Public Service, told the committee that use of the federal Pathways intern program has plummeted, with new hires of student interns falling from 35,000 in 2010 to 4,000 in 2018. Stier said the government’s hiring system is “antiquated” and that it  takes “an average of 98 days to bring new talent on board – more than double the time in the private sector.”

He said it. “If you ask me, the whole world could benefit from a little more Kentucky bourbon.” - Senate Minority Leader Mitch McConnell, R-Ky. He was talking about trade policy ahead of the vote to confirm Katharine Tai.