Some of the new assistance will require USDA to write new rules, a process that will start this spring. The new beneficiaries will range from biofuel producers and beginning farmers to hog producers who had to euthanize animals and restaurants, who could be recipients of donated commodities.

Some additional CFAP payments will be going relatively soon. Those include an increase in payments for cattle under the CFAP-1 program, and payments of $20 per acre for eligible row crops, alfalfa, corn, cotton, hemp, peanuts, rice, sorghum, soybeans, sugar beets and wheat.

We have more on USDA’s plans here.

Sen. Mike Braun, R-Ind., says more than a dozen fellow Republicans could get behind a new ag climate bill, but he’s warning Democrats against overreaching in a way that would endanger GOP support.

“Certainly it will have the votes” once it comes to the floor, Braun said.

Take note: Establishing a carbon bank at USDA would be a “red flag” for Senate Republicans when it comes to climate policy, Braun said.

Bill’s path not clear yet

Stabenow, who also spoke to the Agri-Pulse summit, said she’s addressed two concerns that Boozman said he had: No funding will come out of farm bill programs, and a USDA advisory committee will have a majority of farmer members.

She said the bill, which would require USDA to start certifying carbon credit verification services, is “pretty simple” and that “we’re making some fine-tuning …that will make it even stronger.”

To get a full Senate vote, the legislation could be attached to a larger bill, but Stabenow says she doesn’t know what that will be. Democrats are planning to move a massive climate and infrastructure package at some point this year, but it’s far from clear that it will be bipartisan, or whether it will be one bill or a series of bills.

Don’t Miss: EPA Administrator Michael Regan assured summit attendees that he’ll be getting regular input from the ag sector. “I want to hear from you directly when innovation has been stifled, because we need to work together to overcome these challenges," he said. Read our report here.

Agriculture Secretary Tom Vilsack got assurances from his Chinese counterpart this week that the country has the spread of African swine fever “under control,” but the USDA chief said Wednesday that the situation is likely not that rosy or simple.

“I suspect that what we have is a situation where there are probably some hot spots that are taking place in China,” Vilsack told members of the National Association of Farm Broadcasting. “They don’t have it totally under control, but I don’t think it’s anywhere near as devastating as it was six or nine months ago.”

Keep in mind: Vilsack also said that he will be meeting with Katherine Tai, the new U.S. Trade Representative, and U.S. ag trade with China will be part of the discussion. Trade troubles with USMCA partners Mexico and Canada will also be on the agenda.

The Air Force has sent letters to 400 agricultural operations located near bases that have groundwater contaminated with two toxic and persistent chemicals from a large group known collectively as PFAS.

Mark Correll, a deputy assistant secretary for the Air Force, told a House Appropriations subcommittee Wednesday that about 400 letters have been sent to farmers, with as many as 2,000 more letters still to go out by mid-April.

The 2021 defense authorization bill required the notifications to take place by March 1, but Correll told Rep. Chellie Pingree, D-Maine, the effort has been delayed because information provided by USDA was in some cases, not up to date, and USAF did not want to alarm landowners.

The appeals court ruled that only small refineries that have continuously been exempt from Renewable Fuel Standard blending obligations are eligible for future waivers. “We believe the Tenth Circuit got it right the first time, and we will continue to defend the court’s ruling and stand up for the farmers and renewable fuel producers,” the coalition of groups said.

EPA also filed a brief in support of the 10th Circuit decision. Refiners argue the law provides no end date to the relief small refineries may seek. Oral arguments are set for April 27. 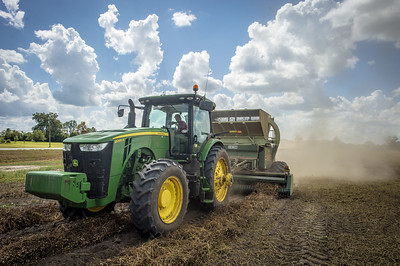 Nearly nine out of 10 heavy equipment manufacturers are bullish about the industry’s prospects this year, according to a survey by the Association of Equipment Manufacturers.

Over half, or 55%, expect sales to hold steady or rise despite the global pandemic still going.

AEM President Dennis Slater said equipment manufacturers have “begun to turn the corner” but that Congress needs to pass a “long-overdue” infrastructure bill.

She said it. “I would love to see a bipartisan agriculture and forestry bill relating to the climate crisis be the first thing that is done in that space.” – Senate Agriculture Committee Chairwoman Debbie Stabenow, D-Mich.