The House Agriculture Committee is working on a bill to help Black farmers increase their market share by providing tax incentives to suppliers to buy their products, committee chairman David Scott, D-Ga., said on a webinar Friday on diversity, equity and inclusion in agriculture. The webinar was sponsored by the Corn Refiners Association and moderated by Agri-Pulse's Sara Wyant.

Scott said he is working with House Ways and Means Committee Chairman Richard Neal, D-Mass., on the tax incentive portion of the legislation, which he said is necessary because Black farmers have been denied the same market opportunities that white farmers have benefited from for decades.

“We have to put in some incentives,” Scott said. Black farmers “don’t have access to the same markets that our white farmers have.”

P.J. Haynie III, chairman of the National Black Growers' Council (NBGC) and owner of Haynie Farms in Reedville, Va., echoed Scott’s comments, saying agribusinesses committed to equity need to make those commitments known to their retail partners and marketing teams, who “often pass our driveways and go to our neighbors.”

“Make sure those that under your influence understand the values that your corporation represents,” such as equity and inclusion, “and make sure that those who don’t comply are held accountable,” Haynie said.

Scott said his legislation also will catalog the list of discriminatory practices to which Black farmers have historically been subjected and include punitive measures for those who still engage in them. 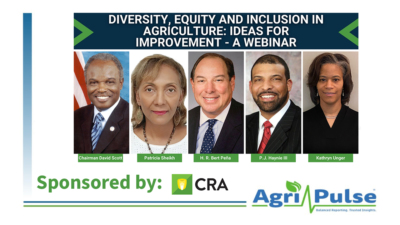 WATCH: Diversity, Equity and Inclusion in Agriculture: Ideas for Improvement

The company is having conversations now with Black farmers to see where the needs lie and identify short- and long-term priorities related to market access, sustainable agriculture and advancing equity in general, Unger said.

“We earn trust by listening first and then helping,” she said.

Patricia Sheikh, senior vice president of Roots of Peace and a former deputy administrator of the Department of Agriculture's Foreign Agricultural Service, said a diverse workforce at USDA is important because the United States has gradually increased the amount of ag goods going to Asia while sending less to Europe.

She also said it’s important to use the expertise at other agencies, such as the White House Office of Personnel Management, to help train people how to be managers.

“We need to get back to the basics, making sure people don’t just have program experience, but management experience,” she said.

H.R. Bert Peña, former staff director for the House Ag Committee under then-chairman Kika de la Garza, D-Texas, noted that when the chairman brought in Hispanic staffers, it was noticed by representatives from Spanish-speaking countries, who “loved it” when they heard their own language.

“They’d never had someone speak Spanish to them on the committee,” he said.

As for the agribusiness employees who work directly with producers, Haynie said training is important, but so is sending young Black employees to areas where they’re not alone.

“You need to have these young men and women learn and train in environments where they’re comfortable,” he said, instead of just “dropping a kid right out of college from a [Historically Black College and University] in the middle of lily-white South Dakota where they don't have anyone that looks like them or can relate to them.”