Fewer acres of California farmland are dedicated to growing stone fruit compared to 10 years ago when growers of freestone peaches and nectarines voted to end the California Tree Fruit Agreement. But apricots, nectarines, peaches, plums, prunes (which USDA distinguishes from plums in its data) and sweet cherries continue to perform well.

“When I look across the landscape at the stone fruit industry in California, I really do think that they’ve found a sweet spot,” said Ian LeMay, president of the California Fresh Fruit Association, despite what he called “a significant decline in production and number of shippers” after the marketing agreement ended.

For peaches, plums and prunes, the number of acres bearing fruit decreased in the past decade, but the total sales dollars increased. Nectarines and apricots saw values drop but not in consort with the amount of reduction in acres. Only cherries saw an increase in both acres bearing fruit and cash value between 2011 and 2020, according to USDA National Agricultural Statistics Service data analyzed by Agri-Pulse.(Cling peaches, prunes and cherries have their own marking orders in the state.)

(For an interactive chart showing acres and values by year, see the graphic at the end of this story.)

LeMay says cherries are unique among stone fruits in that they are harvested early — in part to beat the significant competition from the Pacific Northwest. But he says that leaves them vulnerable to spring storms, so “you do have some volatility in terms of weather conditions on that crop.”

Even though terminating the marketing agreement did “change some of the business dynamics for the industry,” LeMay said “for any permanent fresh fruit commodity in the state of California the most significant pressure is labor.” And ripe peaches, apricots, plums, cherries and nectarines, for the most part, have to be hand-picked. 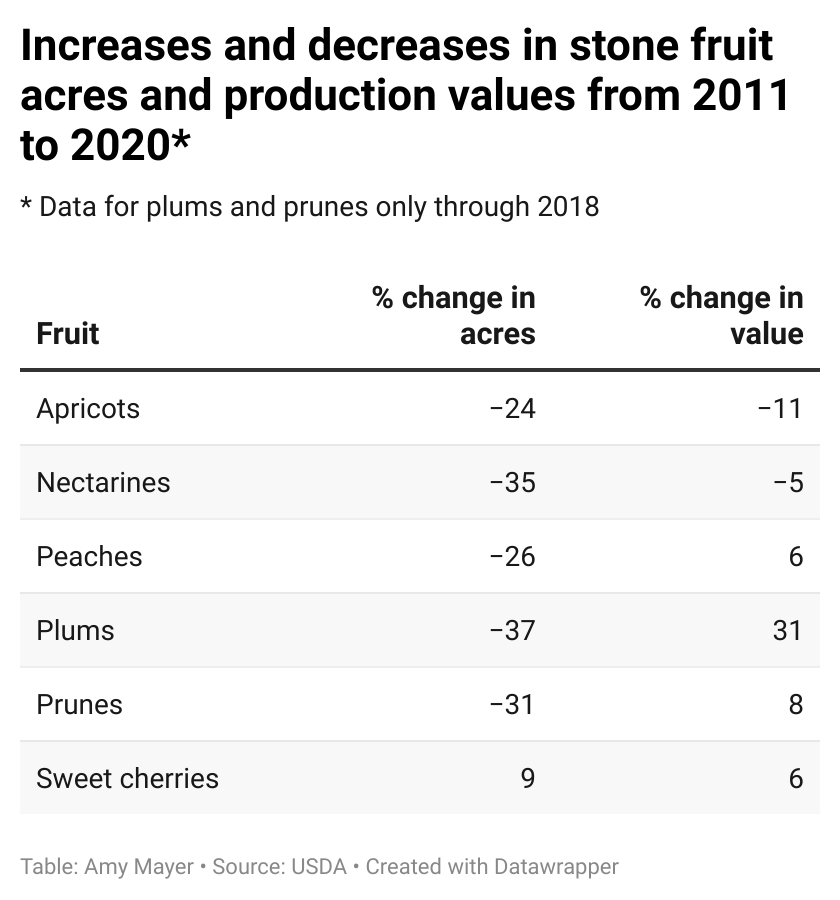 LeMay said his members are exploring or implementing “all sorts of different changes in the orchard to try to minimize the labor demands” such as installing permanent platforms that reduce the need to move ladders from tree to tree and making efficient use of workers ahead of peak harvest. Some, he said, have “crews in the orchard every day doing some sort of preparatory work to make the orchard the right scenario for the perfect piece of fruit.&rdquo

A paper published in California Agriculture last year looked at the marketing order referendum and identified some key reasons why certain growers either wanted to continue or end the agreement. Farms that relied on it for industry information largely supported it and some may have been hurt by its termination, the researchers found. Organic producers also tended to support it.

But growers organized as corporations generally voted against the agreement, while the farms making a high percentage of their profits from the fruit, and the biggest producers overall, more often voted against it. The researchers suggest a partial explanation for this is likely that bigger businesses were doing more in-house marketing. Smaller farms may have been disproportionately hurt when the agreement ended, the paper found, and “[t]his termination may thus have accelerated the exit of farmers from this industry.”

South of Fresno, Masumoto Family Farm is one example of a stone fruit business that has experienced the ups and downs of the industry. Nikiko Masumoto doesn’t remember how her family ultimately voted in the referendum, but she does remember thinking the industry marketing attempts seemed rather out of touch by the time she returned to the farm full time in 2011. She said toward the end, she remembers an effort to couple free iTunes songs with peach purchases.

“I am also an artist, so I appreciate music and art but I just think they were completely missing the mark,” she said.

It was a time when everyday consumers had started paying more attention to where their produce came, from and she says many members of her Millennial generation were “much more willing to spend more money on food that aligns with us ethically.” But from her perspective, the “tree fruit (industry) kind of missed that.”

Like other growers, she is doing what she can to reduce the costs associated with looking for, training and retaining new workers. She’s adjusting the way the farm operates in order to employ a consistent set of workers throughout the season. 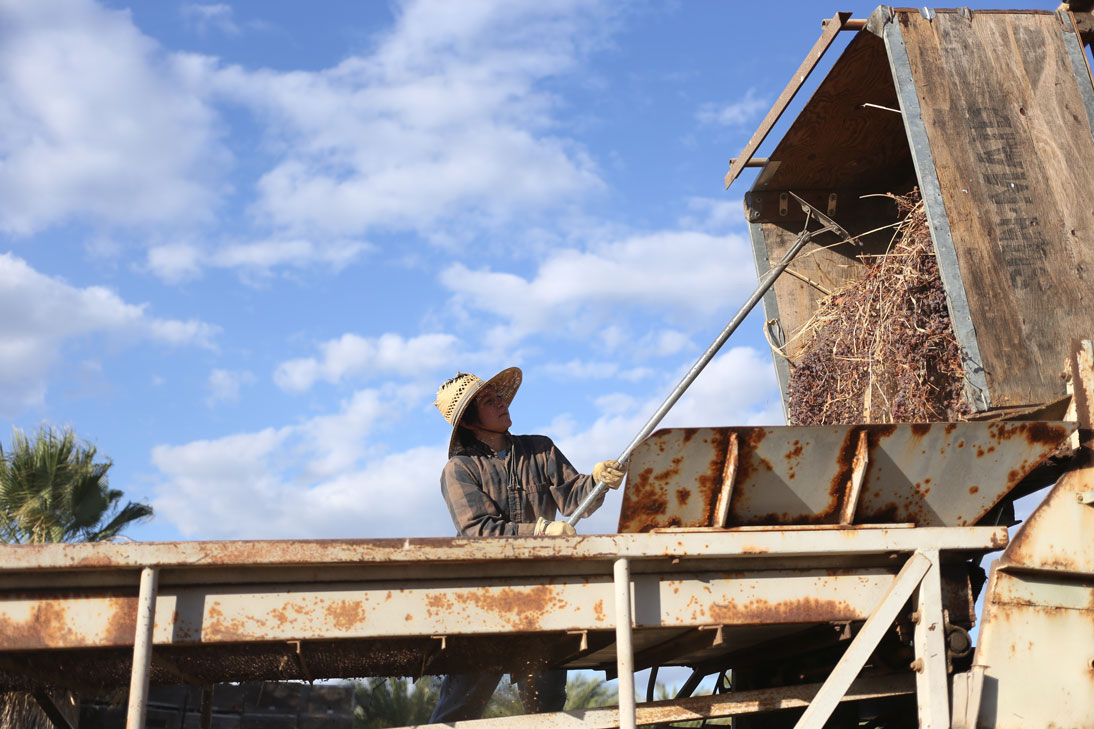 “We’re even changing some of our equipment to fit our employees,” she said, because buying ladders that weigh just a few pounds less can make a big difference for the person moving them all day long.

She values diversity in the workforce, too, and wants to retain workers who contribute different perspectives and offer fresh observations. She had an a-ha moment when it dawned on her that pallets don’t have to be stacked seven layers high, which is standard and also challenging for a person her size (she’s 5’1”).

“There’s no reason why we shouldn’t be questioning the norms that are built into tools,” she added.

She’s the fourth generation of her family to grow fruit, and she’s part of some of the recent changes. This year is the operation's first season with an apricot harvest. They’re certified organic and also grow peaches, nectarines and grapes for raisins. Back when she was born, they grew only peaches, and the spring lady peaches they planted that year took up twice as much acreage as they do now because “we continue to add more varieties so that there’s more of a stagger in ripening.” That’s part of the strategy to employ one crew all season long.

The expense of labor and other challenges have made it “really apparent in our ‘farm neighborhood’ that more people are pulling out tree fruit.” She’s not interested in replacing fruit with their less labor-intensive cousins, nuts, but she does see that it’s unlikely she can stay exclusively in tree fruit (and grapes) given current conditions.

“If we as a region don’t make some very big strides toward groundwater recharge,” or otherwise move away from perennials, she said, “I don’t know if this livelihood is going to be possible 2-3 generations from now.” She sees a “dreadful need” to figure out what a future with significantly less water would look like. While she hasn’t started to experiment with annuals, she’s opening her mind to the possibility. The heart is harder to convince. 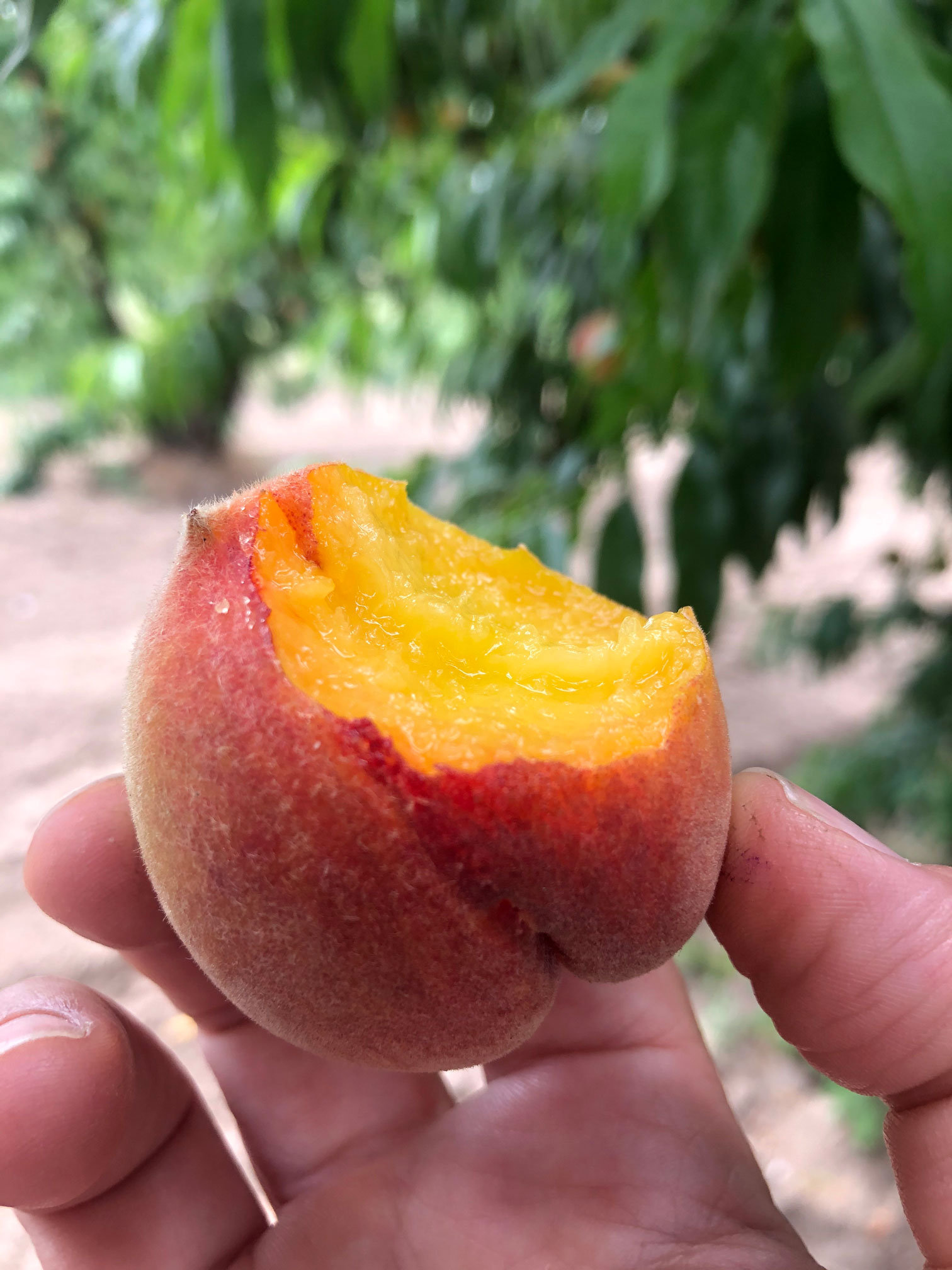 “I love tree fruit,” she said. “It’s really hard to imagine our home without that.” Other challenges — such as the inability to provide health insurance to her workers, and herself, from the farm business — also weigh on her.

“I worry about climate change so much. I worry about growing inequality in our country every day and whether I’m doing enough,” she said. But she also finds strength from the legacy of her grandparents and great-grandparents who were interned during World War II because of their Japanese ancestry.

“For them to leave that experience and not be bitter but transform that awful, traumatic experience into a place that, for my brother and I, has just been an oasis of love,” she said, means that she’s decided, “I have no right to give up on what I think is right.”

So she keeps growing fruit, marketing it to customers willing to pay a premium for exceptional taste or sensory memory. She takes very seriously her role as someone who doesn’t just transact in business but nurtures other people with nutrition.

“Other than sex, I really can’t think of anything more intimate than eating,” she said, “and feeding someone.”