Second time around, it's harder for Vilsack to get USDA team installed

The Biden administration is filling Senate-confirmed positions at the Agriculture Department at a slow pace similar to Donald Trump’s first year in office and well behind the rate at which Barack Obama stocked his sub-Cabinet positions.

Two more nominees are awaiting floor votes, but action on one of those, General Counsel-nominee Janie Simms Hipp, is being held up by an objection from a Republican senator. Senate Agriculture Committee Chairwoman Debbie Stabenow, D-Mich., told reporters Monday she’s trying to determine what the objection is.

By contrast, the Senate confirmed Vilsack the day Obama took office in January 2009 and seven more USDA nominees had been approved by the Senate by May of that year, including three undersecretaries.

At this point in Trump’s term, the only Senate-confirmed official at USDA was then-Secretary Sonny Perdue, who had taken office that April. Trump wouldn’t get another sub-Cabinet member installed until October 2017, when Steve Censky was confirmed as deputy secretary, Greg Ibach became undersecretary for marketing and regulatory programs and Ted McKinney was approved as undersecretary for trade and foreign agricultural affairs.

Vilsack, who served as secretary for the entirety of the Obama administration and then returned this year to take the same job under Biden, tells Agri-Pulse he anticipated the delays in getting the president’s sub-Cabinet nominees in place.

So, Vilsack went ahead and named appointees for several lower positions, ranging from Farm Service Agency administrator to deputy undersecretary for food and nutrition services, that don’t require Senate approval. 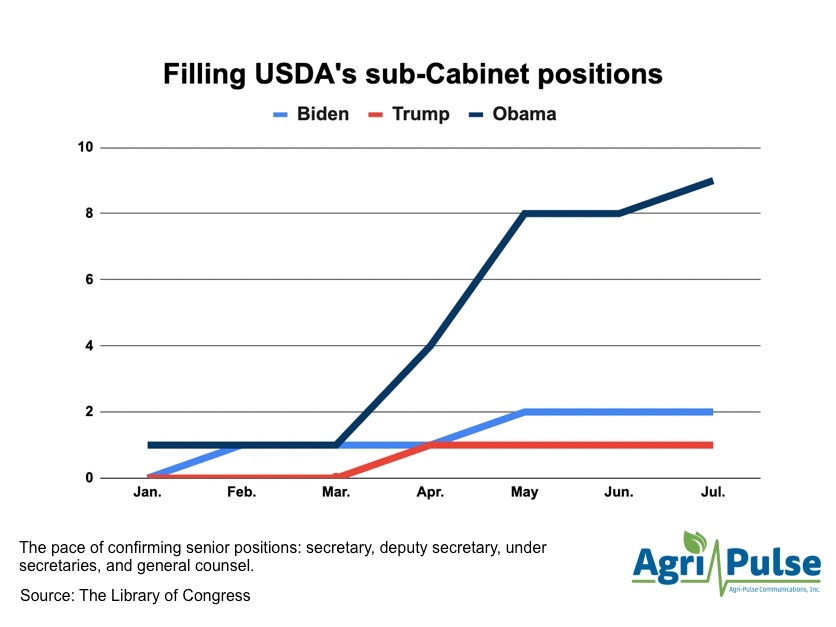 “We’re getting a lot of work done, and the reason we are is because we have filled a lot of the lower positions that don’t require Senate confirmation,” Vilsack said.

Around the time he took office in 2009, he had only seven political positions filled. This year, it was more like 40, he said.

As evidence that his strategy is working, Vilsack pointed to the department’s approval of additional coronavirus assistance and recent announcements about measures to increase competition in the meatpacking sector.

Much of the COVID relief work had to be handled by Gloria Montaño Greene, the deputy undersecretary of farm production and conservation and FSA Administrator Zach Ducheneaux. They took office Feb. 22 — the day before Vilsack was confirmed.

“We've had a pretty good pace of activity when you take a look at the money that we've gotten out the door and are getting out the door,” Vilsack said.

But the lack of Senate-confirmed undersecretaries still makes it difficult for Biden to implement his agenda at USDA, said a former top official at USDA who spoke on condition of anonymity.

Undersecretaries are charged with getting into the details of policy decisions and have an authority their deputies and agency administrators lack, the official said. Senate-confirmed officials also are by design more attuned to addressing congressional concerns.

And while Robert Bonnie — Vilsack's pick as the farm production and conservation undersecretary — is already serving in USDA as the senior climate policy adviser, he’s largely muzzled and unable to say much publicly while he awaits confirmation, something that is typical with nominees.

The former official said some people outside the department believe USDA has dropped the idea of creating a carbon bank, ”because everything’s gone quiet” around the issue. “No, everything’s gone quiet because Bonnie is going through confirmation.” Bonnie has been the leading advocate of using USDA’s Commodity Credit Corp. to buy agricultural carbon credits.

Bonnie’s nomination was announced in April, but consideration by the Senate Agriculture Committee was slowed because of the extensive amount of paperwork he had to provide to the panel, said Stabenow. 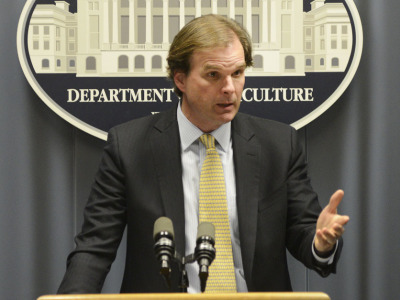 The committee is holding a hearing Thursday for both Bonnie and former New Mexico Rep. Xochitl Torres Small, Biden’s nominee to be undersecretary for rural development. Her nomination was announced in June.

Vilsack attributed the administration's slow pace of filling jobs in part to the long time it takes the White House to review and approve candidates. The Presidential Personnel Office is responsible for approving about 4,000 political personnel. About 1,200 positions must be confirmed by the Senate.

Among the issues the office considers is the ethnicity and background of potential nominees and appointees. Biden promised during the campaign to ensure that the administration was representative of the U.S. population.

Having senators place holds on individual nominations is not a new problem, either. Bill Northey, an uncontroversial nominee to be undersecretary for farm production and conservation during the Trump administration, didn't get confirmed until early 2018, simply because his nomination got caught up in a political struggle over ethanol policy; Sen. Ted Cruz, R-Texas, stalled Northey's nomination as a method of getting leverage with the White House.

Besides Hipp, one other USDA nominee is currently awaiting a floor vote — Jenny Lester Moffitt, who was approved by the Agriculture Committee on Monday to be undersecretary for marketing and regulatory programs.

One other nominee is awaiting consideration by the committee — Homer Wilkes, Biden’s nominee as undersecretary for natural resources and environment, which is responsible for the Forest Service. His nomination was announced in June.

There are no nominees yet for four more undersecretary positions at USDA: food safety; food, nutrition and consumer services; research, education and economics; and trade and foreign agricultural affairs.