Farmers partner with activists to close the SGMA water gap

A collaborative mindset is taking hold in the San Joaquin Valley as the realities of drought, climate change and groundwater overdraft are steering once-combative parties in a new direction. The San Joaquin Valley Water Collaborative Action Program (CAP) is bringing farmers to the table alongside environmental groups, drinking water advocates and local municipalities to develop a comprehensive plan for the many challenges ahead.

“I am frankly astonished to see the progress that we are making,” said Tim Quinn, executive officer of the CAP, during a recent meeting of the agriculture committee for the Association of California Water Agencies. “The reason is that all the five interest groups have very different attitudes than in years gone by.”

The groups, known as caucuses, are tackling five problems: resolving water supply and demand issues; providing safe drinking water to communities; restoring habitat; coordinating efforts valley-wide; and aligning local, state and federal governments on policies. The CAP is working on an initial report assessing the problems and outlining a solution set and will release it for public review next month.

“We want to close the gap on groundwater overdraft everywhere, no matter what,” said Quinn. “That's a significant commitment by the ag industry.”

The best example of progress was the water supply workgroup, he said, which is chaired by the “odd bedfellows," Friant Water Authority CEO Jason Phillips and Rodd Kelsey, a water policy researcher at The Nature Conservancy. Nearly a dozen conservation groups participate in the CAP, including Trout Unlimited, American Farmland Trust and Sustainable Conservation, which has led on-farm groundwater recharge projects with growers. The groups have collectively built a trust that did not exist just six months ago, said Quinn.

Kelsey shared with Agri-Pulse his excitement over progress his workgroup has made in identifying the problem of water supply reliability for all users. The caucuses have also been receptive to his research on repurposing fallowed farmland for conservation projects and other multibenefit endeavors. 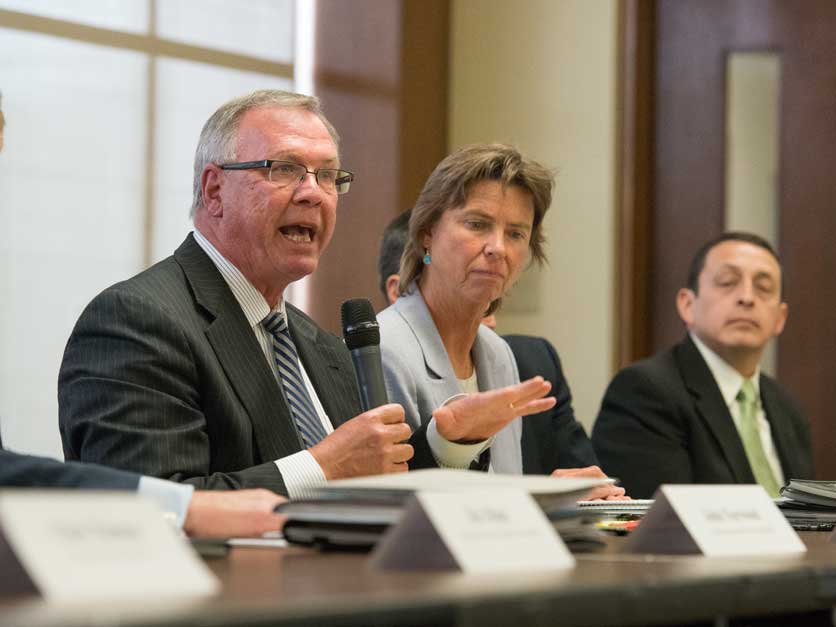 “They see the need for some of the most unsustainable agricultural lands coming out of production being a part of the solution,” said Kelsey. “They're excited to figure out how to make that happen in a way that doesn't create more pain for the communities in the valley and actually adds value to the valley.”

Habitat for imperiled wildlife could improve air and water quality, while other solutions for the land, such as developing renewable energy projects, could bring jobs to the communities, he explained.

While similar initiatives to the CAP have brought together environmental groups and water users to collaborate on solutions, Kelsey said the CAP has been unique for also including cities and counties as well as representatives from disadvantaged communities.

Alexandra Biering, who manages government affairs and communications for the Friant Water Authority, emphasized the importance of that trust.

“If nothing else, having some of these entities and groups talk to each other and engage with each other on neutral ground—honestly and openly—is something that a lot of folks have been struggling with how to do for years,” said Biering.

She has noticed that it has inspired groundwater sustainability agencies in the valley to engage more with clean water advocates.

“They're actually working together in a more collaborative fashion than they had in the past, when it was more antagonistic,” she said. “Even outside of the CAP, there are ripple effects that are being felt in the valley.”

Quinn recognized that “some big arguments, some big decisions” have yet to be made, but said the groups are headed in the same direction.

He called it “no great surprise” that environmentalists are now “aggressively helping to pursue increased supply,” primarily through flood-managed groundwater recharge, while farmers are talking about repurposing land for conservation. Maximizing water supplies is the first step to closing the gap, which means capturing as much as possible from flood flows out of local streams and rivers. The CAP is also looking further ahead to broader flood management and capturing excess flows in the Sacramento–San Joaquin Bay Delta when atmospheric rivers deluge the watershed.

“By the time we are done, we will have a plan that restores sustainable supplies for a bright, vibrant ag economy, where we can look ourselves in the mirror and say we did not sell the ag economy out,” he said. “We will have an environmental restoration program that is among the biggest in the nation. We will have safe drinking water for all valley residents within 10 to 15 years.”

He described the interests as about 80% of the way toward complete alignment and past the point of antagonism toward each other and an adversarial winner-take-all approach.

Kelsey cautioned that “the devil is really going to be in the details” for how the valley can maximize groundwater recharge to solve the overdraft problem. While the groups may not agree on each of those details, he emphasized that the CAP will be most useful in providing a broad voice to decision makers on how the state can move forward and invest in solutions.

Department of Water Resources Director Karla Nemeth applauded the progress with the CAP, calling it timely, as California is likely headed into another dry year and the state is seeking to bolster collaborative efforts at the local level and steer away from conflict.

“This is going to take a lot of people really helping California to move forward, particularly when it comes to water for agriculture,” said Nemeth.

She acknowledged the state has also struggled with ownership over conservation efforts and needs a landscape-scale approach to environmental restoration to deal with water management and species challenges in California.

This requires a new way of thinking that is similar to the CAP, she explained. State and federal wildlife agencies “are fundamentally regulatory agencies” and the trade-offs involved “aren’t necessarily in the DNA” of those agencies.

“That [approach] is also essential for us to do the work that we need to do relative to infrastructure investment,” she added.