The fate of a key cattle market reform proposal is at stake as the National Cattlemen’s Beef Association kicks off its annual convention today in Houston.

The American Farm Bureau Federation has already come out in opposition to the cash trading requirements in a bill sponsored by Sens. Deb Fischer, R-Neb., and Chuck Grassley, R-Iowa. If NCBA follows suit this week, the opposition of two of the biggest ag policy players in Washington could leave the market reforms in serious jeopardy.

Take note: The Senate Ag Committee’s GOP staff asked a handful of land grant economists to analyze the Fischer-Grassley legislation, and Texas A&M’s Agricultural and Food Policy Center is the latest to offer a stinging analysis. In a 10-page report, the authors say the bill’s regional cash trade mandate would “result in lower cattle prices and higher wholesale and retail beef prices.”

“Negotiated trade mandates do provide additional price discovery and market transparency. More price discovery, however, does not mean that cattle prices would be higher,” the study says.

An earlier analysis suggested the bill would cost producers about $50 per head of cattle.

By the way: The A&M study says there would be little impact from the trading requirements on Grassley’s home state of Iowa.

The House Rules Committee meets today to tee up floor debate on a sweeping U.S. competitiveness bill. The proposed amendments that the panel will consider for floor debate include one that would tighten USDA disclosure requirements for foreign land ownership.

The amendment by Rep. Mark Pocan, D-Wis., would require USDA to create an online database of foreign-owned land and update the records every 90 days.

USDA’s latest data, which goes back to 2020, shows foreign interests own 37.6 million acres, or 2.9% of the nation’s total farm, ranch and forest land.

Another proposed amendment, offered by Rep. Abigail Spanberger, D-Va., would require the “administration to report back to Congress on “foreign agricultural economic espionage in the US, including its impact on the U.S. economy and national security, and emerging threats.”

Rep. Angie Craig, D-Minn., is proposing to require the administration to “evaluate the stability of the agriculture and food system supply chain.”

What’s next: The House will debate the America COMPETES bill later this week. 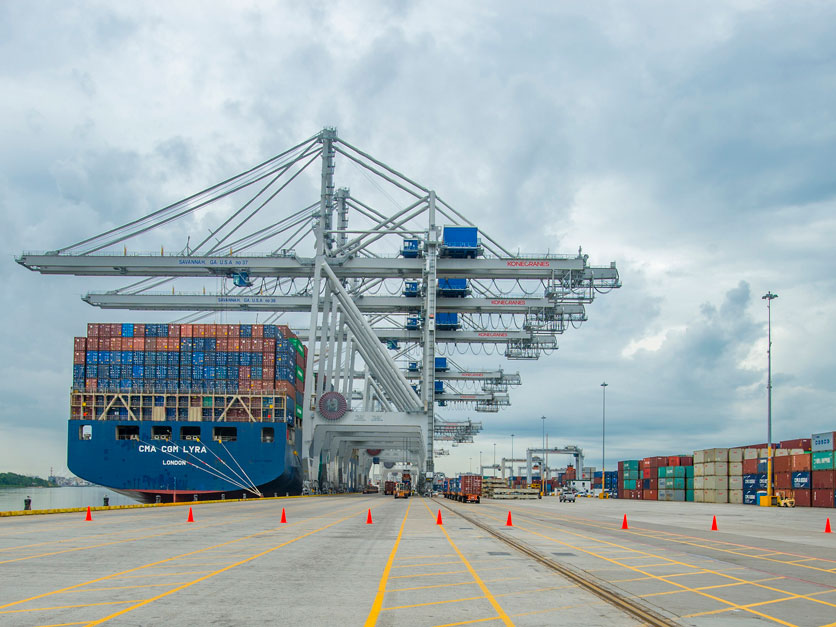 Foreign market demand for U.S. ag commodities is strong, but they “won’t be worth a hoot” if the U.S. doesn’t stop ocean carrier companies from refusing to haul U.S. dairy, citrus, tree nuts, wine, hay and other commodities, Rep. John Garamendi, D-Calif., said Monday at a trade event hosted in Washington by Agri-Pulse.

The Biden administration is rushing to do what it can to clear up congestion at West Coast ports in order to help U.S. ag exporters, but none of those efforts will get to the core of the problem, said Garamendi.

USDA announced Monday that it will partially fund a new container yard at the Port of Oakland and Agriculture Secretary Tom Vilsack – another speaker at the event – said the project should be up and functional by early March. Garamendi downplayed the project’s impact and stressed the importance of his legislation that would stop carriers from refusing to load Asia-bound U.S. ag exports.

What’s next: Ag groups are awaiting release of the Senate version of Garamendi’s bill.

Leprino Foods Co., the largest dairy buyer and biggest mozzarella cheese producer in the U.S., isn’t afraid of plant-based cheese entering the market, says President and CEO Mike Durkin. Instead, the company is embracing it.

“We view it as an opportunity,” said Durkin, who added that Leprino has already developed its own plant-based, non-dairy cheese.

Durkin says plant-based cheese doesn’t pose a significant market threat to regular dairy cheese, but there is demand, and Leprino hopes to get its new product on the U.S. market over the next 12 months.

A federal judge says USDA can revise its line-speed waiver program for poultry facilities based on trials of a similar program at hog processing facilities. The judge didn’t rule on the merits of a union-led challenge to the program, but he ordered USDA to provide status reports around the end of April and the end of June.

By the numbers: $160 billion. That was the amount of U.S. ag exports, a record for the period, during President Biden’s first 11 months in office, according to White House press secretary Jen Psaki.

“While we’re proud of this historic progress, we know that agricultural exports could have increased even more but for pandemic-induced supply chain challenges,” she said.