Dairy and cattle groups are pushing back on a measure in the California Legislature that would incentivize plant-based options in school meals. During Assembly floor debate on the bill last week, lawmakers also raised concerns over granting preference to milk substitutes, raising demand for out-of-state products and adding to the state’s food waste problem.

The bill’s author, Assemblymember Adrin Nazarian of Sherman Oaks, argued the grant program proposed in the bill would galvanize a cultural change toward healthier eating habits and emphasized that he is not proposing a mandate. He struggled to understand why anyone would oppose a measure that would give low-income students in his Los Angeles County district alternatives to “a day-old hot dog that’s been rolling slowly over at a convenience store.”

“I have not yet heard exactly the reason why they want to oppose this bill, except for completely taking out one section of the bill,” said Nazarian.

In arguments filed against the measure, Western United Dairies and the California Cattlemen's Association assert that the bill would use state funds to promote “costlier plant-based processed foods above other healthy, nutritious products.”

“Given the breadth of food insecurity among California's schoolchildren, the state's first priority should be ensuring that all California students receive adequate nutrition in school,” the trade groups wrote.

The nonpartisan Legislative Analyst’s Office has estimated that supplying 32 million plant-based entrees and beverages for California’s students would cost about $9 million annually.

Expanding the scope of the bill, Nazarian presented the legislation as a climate-friendly food program when he first introduced it in 2019, but it failed to pass the Senate Appropriations Committee. Separate measures that would have incentivized organic school meals and California-grown products also failed to pass committees that year. 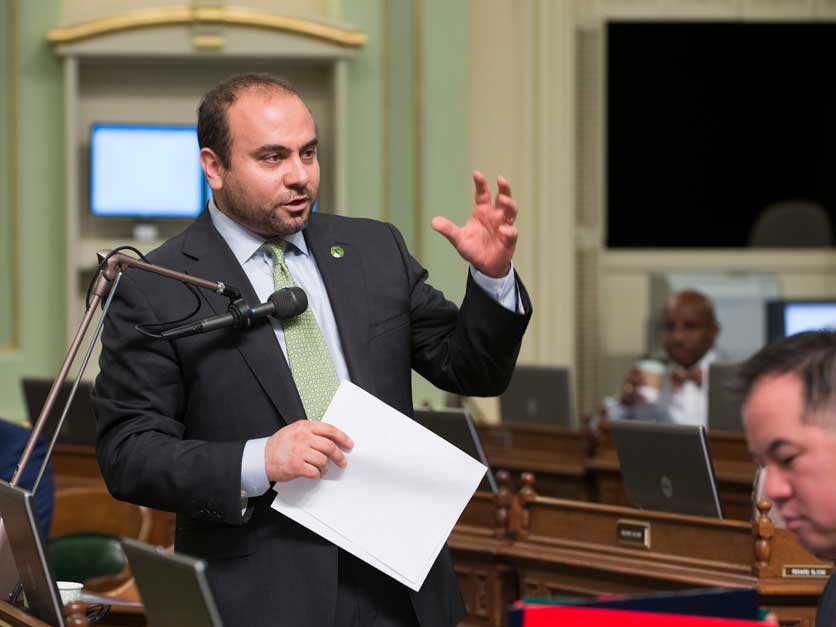 Nazarian revived the effort in 2021 in its current form, Assembly Bill 558, and faced early opposition from agricultural groups. The California Farm Bureau argued that plant-based options were already available for students, at the discretion of their school. The California Department of Education has found that about 6% of the meals and beverages offered in schools is already plant-based.

Nazarian pulled the measure before a committee could debate the issue, and he later revived it ahead of a deadline last month for 2021 legislation to advance.

During a subsequent committee hearing, Nazarian said that along with childhood nutrition issues, the bill addresses climate emissions. He pointed to a pilot study on plant-based meals for the Oakland Unified School District and noted that the environmental group Friends of the Earth claimed the program reduced carbon emissions by 14% and water use by 6%. The animal rights group Social Compassion in Legislation is a co-sponsor of AB 558. Nickolaus Sackett, who directs the group’s legislative affairs, argued during the hearing that the world must shift away from meat and dairy products to avoid the worst impacts of climate change.

“Our federal and state governments continue to incentivize meat and dairy products in our schools with subsidies and financial handouts to the same industry that is increasing our healthcare costs and environmental destruction,” said Sackett. “AB 558 is a small step to mitigate the antiquated, harmful but entrenched policies which prioritize the animal industry over the health of both our children and our planet.”

Nazarian and his co-authors have also added provisions aimed at supporting religious and vegetarian dietary restrictions, along with funding for staff training and student engagement.

Asm. Rebecca Bauer-Kahan of Orinda shared how her sister, who lives in another state and manages the family’s kosher diet, was shocked when her daughter brought home a bacon omelet from school.

“It's critical that every single California child is able to express their religion and have access to foods in their school that meet those needs,” said the Bay Area lawmaker. “We must take actions like this to expand our options to meet the needs of every kid in California who needs kosher and halal meals.”

The bill would provide reimbursements of up to 20 cents for every plant-based, vegetarian or restricted diet option, and 10 cents per plant-based milk option.

Asm. Luz Rivas of North Hollywood, a joint author on AB 558, framed the effort as a way to bolster a major piece of legislation signed into law last year that granted universal access to school meals.

“AB 558 supplements this program by ensuring that school meals are as inclusive as possible so that no student with dietary restrictions will go hungry while learning at school,” said Rivas.

Asm. Sharon Quirk-Silva of Fullerton, another co-author, argued it would support the state’s growing Latino student population through better health outcomes, reasoning that “plant-based meals have shown to bring down many, many poor and chronic conditions.”

Yet Asm. Bill Quirk of Hayward, one of several Democrats who abstained from voting on the measure, was concerned about giving preference to plant-based milks over cow milk.

“At least for many young children, it's really preferable to have dairy milk,” said Quirk.

“It's about creating new options. Right now, dairy milk is already provided,” said Kalra. “I have a lot of friends who are lactose intolerant or allergic to dairy. They don't get the opportunity to have milk during their school day.”

Kalra also pushed back on concerns from Asm. Jim Cooper of Elk Grove, who said the measure could diminish the traditional role of California dairy farmers in supporting schools with milk and cheese products. Western United Dairies has noted that the state has been importing an increasing amount of both dairy alternatives and plant-based milk products in recent years.

“When you're a California farmer or rancher, and you're competing with a global market, it's tough because of the rules and regulations we pass here in California,” said Cooper. “They have one arm tied behind their backs.”

Kalra mentioned that the state does not require schools to source from California producers and said he would be open to debating such a bill.

“Why would we create that requirement for this one particular grant program?” he asked.

Kalra responded to other comments from Asm. Al Muratsuchi of Torrance, who said healthy foods often end up in the school garbage bins, with students instead choosing pizzas and hamburgers. In describing a program to install salad bars in Santa Clara County schools, Kalra argued that anecdotal observations showed the students were gravitating toward salads, since their parents were not looking over their shoulders.

Nazarian added that in many school districts, students don’t have the option to choose those healthier meals. He pointed to the success of a nutrition education program in Los Angeles that has been educating poor children on healthy cooking and exercise. The Los Angeles Unified School District also implemented plant-based options, alongside Elk Grove, Oakland and three other districts.

The Assembly lawmakers approved the measure, passing it to the Senate for more committees to debate.