Companies and farm groups that are trying to recruit farmers to sign up for climate plans often face skeptical producers who fear that most, if not all, of the financial benefit will go to retailers and manufacturers who get to label their products as good for the environment.

“Naturally, everyone would like to be paid when they do something that makes their product more marketable,” said Kent Fountain, who recently stepped down as chairman of the National Cotton Council, which is working to enlist growers in a program aimed at meeting apparel companies’ demand for cotton that can be certified as sustainable.

“The big challenge is getting the grower to recognize that the benefit may not be at this point … may not be tangible,” said Fountain, a ginner and farmer in Georgia.

Some congressional Republicans have questioned whether carbon markets, in particular, will directly benefit farmers.

“My concern … is that there's going to be a value created out of thin air that's going to provide very little for the farmer or the environment, and then a whole bunch of people that don't have anything to do with agriculture are going to be getting the money,” said Rep. Austin Scott, R-Ga., said at a House Agriculture Committee hearing.

Agriculture Secretary Tom Vilsack says the key to winning over farmers to the benefits of carbon markets and industry sustainability programs is to measure and validate the outcomes of ag practices, which is the primary goal of the administration’s $1 billion Partnerships for Climate-Smart Commodities.

The initiative will fund a series of pilot projects aimed at proving the value of climate-smart practices to farmers as well as their customers and potential investors.

Once the carbon impact of ag practices is properly measured and validated, then standards can be set to use in certifying climate-smart products, Vilsack said.

“Then, we can have a conversation about the value that adds and who gets the benefit of that value,” Vilsack said.

He envisions companies and consumers ultimately paying more for climate-smart products in the way they’re willing to pay a premium for food that’s certified to meet organic production standards.

Andrew Walmsley, senior director of congressional relations for the American Farm Bureau Federation, agreed that the pilot projects could help show how farmers can capture value from climate-smart practices.

The projects “will influence both private sector decisions going forward and potentially … maybe the farm bill as we look at integrating climate more into conservation programs,” Walmsley said.

The combination of the pilot projects and the passage of the Growing Climate Solutions Act, which would authorize USDA to start certifying farm advisers and carbon credit verification services, would give farmers producers “a much better idea of where opportunities might exist and where pitfalls might be,” Walmsley said.

Walmsley also sees it as important that the projects also will include “early-adopter” farmers who often can’t qualify for carbon credits for practices such as conservation tillage and cover crops that they’ve already been using, sometimes for years.

AFBF is a founding partner in the Food and Agriculture Climate Alliance, which laid out the basic concept for the initiative USDA is following.

For now, the administration is steering away from using the projects to develop standards that could then be used for registering and labeling low-carbon products akin to how USDA set standards and verification procedures for organic food more than two decades ago.

Vilsack: US carbon market needs a focus on farmers
Carbon markets lure farmers, but will benefits be enough to hook them?
New initiatives will pay farmers to keep carbon in the ground

USDA raised product labeling as a potential goal when it solicited input on the climate-smart initiative last year, and Vilsack talked up the idea of green labeling while attending the COP26 global climate conference in Glasgow last November.

“We're sensitive to the fact that if USDA came out of the gate said, ‘Hey, we're gonna do a standard,’ it would feel very, sort of top-down to producers,” Bonnie told Agri-Pulse in a recent interview.

Still, he said the information gleaned from the projects on measuring and monitoring the impact of climate-related practices could someday lead to the development of USDA standards. 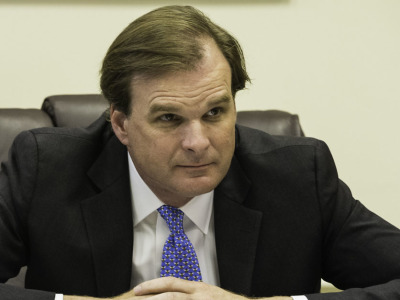 USDA Undersecretary Robert Bonnie “Ten years from now, is part of USDA more involved in standards? … We don't know the answer to that yet,” he said.

The National Cotton Council is among several commodity groups that are expected to join in proposals to USDA for climate-smart pilot projects. Fountain says NCC hopes the funding will make the industry’s U.S. Cotton Trust Protocol more attractive to farmers.

The protocol is designed to provide mills and apparel companies with a source of cotton that can be certified as sustainably grown. The goal is to create a revenue stream from the cotton that can be shared with farmers who are members of the protocol. For now, however, the only enrollment incentive is a $250 gift card.

Some 525 mills and manufacturers and 37 global brands and retailers are currently members of the protocol, which enrolled about 6% of the 2020 crop, or about 950,000 bales. The protocol’s board members include officials from Levi Strauss and Co. and British retailing giant Tesco.

Some 300 farmers were enrolled in the program for the 2020 crop, and the program needs to show continuous year-on-year growth, said Ken Burton, the protocol’s enrollment manager.

The goal was to enroll 500 growers for 2021; as of last week, with six weeks left in the enrollment period, 350 growers had signed up, Burton said.

Selling farmers on the benefits of the program isn’t the only hurdle. Farmers have been hesitant to sign up in part because of concerns about the privacy of the data they provide to the program, Burton said. “Individual data does not leave the walls of the U.S. Cotton Protocol,” he said.

Another factor is the verification process that is used to check compliance with the standards. Records for 25% of the enrolled growers in each region are selected for desktop verification. A smaller percentage are selected for farm visits. About 15 growers were selected last year for field visits.

Clothing brands and retailers are under pressure from consumers, investors and governments to prove that the cotton they are using is sustainably produced, Burton said.

“They're trying their best to make sure that they have the needed documentation that allows them to make impact claims,” he said.