Poultry and egg producers are closely watching the spread of highly pathogenic avian influenza, which has already hit more states than the 2014-2015 outbreak and infected close to half the number of birds as it did seven years ago.

So far in the current outbreak, which was first detected in a commercial flock in February, 22.8 million birds have been affected. Most are egg layers/pullets, which account for about 18.7 million of the total, but about 2.3 million turkeys have been - or will have to be - depopulated. Another 1.8 million broiler chickens also have been infected, according to USDA's Animal and Plant Health Inspection Service.

In 2014-2015, “approximately 7.4 million turkeys and 43 million egg-layers/pullet chickens, as well as a limited number of mixed poultry flocks, were affected by HPAI and died from the disease or were depopulated as part of the response,” according to a report issued by APHIS in 2016.

That outbreak “was the largest HPAI outbreak ever recorded in the United States and arguably the most significant animal health event in U.S. history," the report said.

Although poultry production “returned to more typical levels in early 2016 as the egg and turkey industries recovered, … prices for many poultry products remained at multiyear lows in 2016, partly due to lingering export weakness related to the outbreak and other factors,” a report from the Economic Research Service found.

In that outbreak, HPAI was detected in 21 states, three fewer than this year's ongoing spread, though the numbers of infected birds are still much lower than in 2014-2015.

So far this year, there have been 72 detections in commercial flocks in 14 states, according to APHIS figures as of April 4; that's compared to more than 200 detections in 2014-2015, though that figure also includes wild birds and backyard flocks.

“We want to get rid of it as soon as we can,” says Jim Sumner, CEO of the USA Poultry and Egg Export Council. “It's devastated the European market, especially right now in France,” where there are “hundreds of detections. And so it's just spreading globally, unfortunately.”

APHIS “has been very responsive and awesome to work with on this,” he adds, but the outbreak “is becoming an increased burden, because they have limited personnel that are capable of dealing with this, and we have so many countries that are wanting responses” on the status of HPAI in affected states.

Depending on the trading partner, exports are blocked from an entire state or only from affected counties, Sumner said.

So far, it’s too early to estimate the economic impact the outbreak will eventually have, but the last time around, "the value of turkey and laying hen losses was estimated at nearly $1.6 billion,"  according to the Congressional Research Service, which put economy-wide losses at $3.3 billion.

“North Carolina is a major exporter to all of our markets,” including China, Taiwan, Mexico, and Cuba, he said. “And it's going to have some significant impact on both their chicken and turkey industry.”

Rosemary Sifford, chief veterinary officer at USDA, said APHIS is doing its best to keep up with requests from trading partners who are monitoring the outbreak to determine the extent of their import prohibitions.

One difference between the two outbreaks is the relative lack of “lateral spread,” from one operation to another, Sifford said. In this outbreak, migratory birds have been the source of most introductions of HPAI, Sifford said.

“So far, our lateral spread seems to be relatively limited. And yet we're in 24 states,” compared to 21 states in the previous outbreak, Sifford said. “So this one has had a much broader geographic spread so far, and appears to be related to the very heavy viral load in the wild bird population.”

On trade, APHIS is “providing each trading partner the specific information they need to be able to keep restrictions at the smallest level possible,” Sifford said.

But Sumner says it’s been difficult for APHIS to keep up with the demands for information from trading partners.

“They can't deal with all of the requests for information at the same time,” he said. “It's a lot of information that's being requested on each new outbreak,” he said. “So it's very burdensome.”

Major trading partner Mexico, he says, prohibits imports from states until APHIS has shown HPAI has been adequately contained to allow county-by-county restrictions. For example, Mexico has reduced restrictions to the county level for Indiana, Kentucky and Delaware, and Sumner said he expects more states to follow.

One benefit of the 2020 “phase one” trade agreement with China, he said, is that the country no longer bans poultry products from the entire U.S. because of a single high-path detection. Now, China does so on a state-by-state basis. “So this is a great improvement,” he said.

“We do believe that a lot of the work that has been done since 2015 is really helping us at this point,” Sifford said. “Not only the improved biosecurity, which we are continuing to encourage people to really focus on, but a lot of the planning and preparation work that was done.”

Beth Breeding, a spokesperson for the National Turkey Federation, also says that biosecurity measures implemented since the last outbreak have helped to deal with the latest one. “Obviously, we're in a really difficult position right now,” she said. “But I do think that our industry is better prepared now than we've ever been to tackle this.”

Asked whether the industry is confident infections can be limited, Breeding said “It’s difficult to tell right now. We do have some hope that this will not be a repeat of 2015, relying on those lessons that we've learned and our continued cooperation with USDA and industry.”

But she adds, “We are still in migration season. And as you know, that is the main suspected culprit of this transmission. And that certainly makes it difficult, even with the best biosecurity, to control this as much as we would like to.” 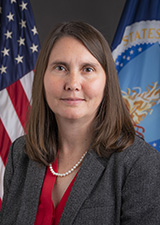 Breeding said the impact on consumers isn’t clear yet. “We are still below 1% of U.S. turkey production that's been affected,” she said. In 2014-2015, that figure surpassed 3%, “and there weren't significant impacts on consumers.”

APHIS has five teams that are in “joint incident commands” with states, and the agency has created more teams by cutting its usual 20-person teams in half to create an additional seven teams to serve more states if needed, Sifford said.

“As the migratory birds move through this spring, we’ll continue to see the virus move,” she said.

The virus has now been detected in birds in all the major migratory flyways — Pacific, Mississippi, Central and Eastern.

USDA spent close to $900 million responding to the last outbreak, most of it on biosecurity, according to a Congressional Research Service report, but also including $190 million in indemnity payments to producers.

Sifford says Ag Secretary Tom Vilsack has asked for “a little over $130 million,” with another request in the works.

The department’s HPAI indemnity program covers the price of birds that have to be depopulated, including the cost of feed, Breeding said, but “this is not the same as the market value. Separately, from indemnity, USDA does cover the costs of depopulation and cleaning/disinfecting at an agreed-upon rate.”

The indemnity payments “in many cases do not make producers whole,” Sifford says. “However, the intention is to be able to pay them enough that they can move past this, get their virus elimination done, get their facility in a condition that it can be restocked, so that hopefully, as soon as the virus is no longer active in that area, they can restock and be able to make it through this challenge.”