Vilsack and USDA announced the news Saturday. The secretary is fully vaccinated and boosted and “will isolate in accordance with CDC guidelines and will return to the office after testing negative for the virus,” USDA said.

Forest Service Chief Randy Moore will fill in for Vilsack at an event in Colorado today, where administration leaders will discuss the benefits of the infrastructure package to rural America.

Cuba gets much of its imported wheat from the Black Sea region, but the war in Ukraine has cut off much of that supply, Cuban Agriculture Minister Ydael Pérez Brito tells Agri-Pulse, stressing that the country is looking to diversify its imports.

Countries like France and Canada also ship wheat to Cuba, but those imports have gotten very expensive, adding to Cuban concerns.

The U.S. exports almost no wheat to Cuba. The U.S. partially lifted its embargo on exports to Cuba about 20 years ago, but it remains illegal to provide credit to Cuban importers.

A Cuban government import official said Cuba is routinely given about a year to pay Canadian wheat exporters.

By the way: Cuban President Miguel Díaz-Canel hosted a group of U.S. agriculture representatives last week at the Revolutionary Palace. Agri-Pulse’s Bill Tomson was there.

After greeting the group, which included industry officials such as Dalton Henry, policy director for the U.S. Wheat Associates, Jim Sumner, president of the U.S. Poultry and Egg Export Council, and Asiha Grigsby, international promotions manager for USA Rice, Díaz-Canel answered questions and then drank Cuban rum with the visitors. 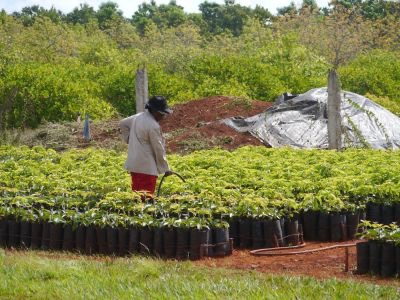 Watering the avocados at a Cuban farm where they also grow tobacco,papaya and mangoes. Photo: Bill  Tomson

The Senate has its conferees for the COMPETES bill, a sprawling piece of legislation designed to increase U.S. global competitiveness.

Majority Leader Chuck Schumer is sending two Democrats from the Senate Ag Committee: Sens. Sherrod Brown of Ohio and Raphael Warnock of Georgia. Other ag heavyweights include Jon Tester, D-Mont., and Maria Cantwell, D-Wash., who helped pass the Ocean Shipping Reform Act as the chair of the Commerce Committee.

The House bill includes its version of the Ocean Shipping Reform Act – legislation aimed at lowering shipping costs and ending port backups – but the Senate package does not. House sponsors have expressed a desire to tackle OSRA as part of COMPETES, but a clear path hasn’t emerged yet.

Remember: Trade concerns will take precedence for ag stakeholders in the negotiations.

Also in the House package are reauthorizations and adjustments to the Generalized System of Preferences and Trade Adjustment Assistance. GSP lapsed last year, and TAA will later this year. The Senate bill addresses GSP, but not TAA.

More than a dozen tobacco farmers, a tobacco warehouse owner and several insurance agents have pleaded guilty to participating in a $40 million crop insurance scheme.

According to the FBI, the farmers would often raise good-quality tobacco, but report a ruined crop to private insurance providers and the USDA. The agency said the participating insurance agents and adjusters would get “kickbacks" for helping the farmers.

Because of this case, USDA’s Risk Management Agency has updated its tobacco policies and is now requiring farmers to destroy all “unsalable" tobacco crops with their insurance adjuster as a witness.

Monsanto has settled Roundup exposure litigation that had been scheduled for trial in Missouri state court Monday, as the company tries to resolve thousands of cases that remain active following its large-scale settlement two years ago.

"We are pleased that the Neal case has been resolved as part of our continuing work to settle the Roundup litigation on reasonable terms,” Bayer, which bought Monsanto in 2018, said. The matter involved three separate plaintiffs.

Bayer continued, “Although the company may settle individual cases, it will not entertain further inventory settlement discussions with plaintiff lawyers that are representing a substantial number of Roundup claims, now that the Supreme Court has requested input from the Solicitor General in Hardeman.”

Bayer has filed a petition in the Supreme Court seeking review of a Ninth Circuit Court of Appeals decision that found the Federal Insecticide, Fungicide, and Rodenticide Act does not pre-empt state law negligence claims. Solicitor General Elizabeth Prelogar, the administration’s top lawyer, has yet to provide her views on the case.

Candidates have been chosen for elections to fill the seat of former Nebraska Republican Rep. Jeff Fortenberry.

State Sen. Mike Flood on Saturday accepted the Nebraska Republican Party’s nomination to appear on the ballot for the May 10 primary, which will be followed by a June 28 special election to serve the rest of Fortenberry’s term. Fortenberry resigned last month after being convicted of lying about receiving illegal campaign contributions.

Sen. Patty Pansing Brooks of Lincoln is the leading Democratic candidate, according to the Omaha World-Herald.

Boozman to USDA: Make a plan for Ukraine food crisis

The top Republican on the Senate Ag Committee is asking USDA to provide a plan for how it will respond to global food shortages and a supply chain crunch as war continues to rage in Ukraine.

Boozman, writing in a letter to Agriculture Secretary Tom Vilsack, said "the emergency we face today outpaces the scope" of U.S. work on global food security. Numerous analysts and officials have warned war in Ukraine will create a global food supply shock and widespread famine, particularly in countries that import heavily from Ukraine.

Boozman asked Vilsack to ensure U.S. producers "have access to necessary resources to meet the increased global demand" and urged him to work across agencies to respond to anticipated food shortages, inflation and supply chain shocks. He also said USDA should coordinate with FDA and EPA to ensure regulatory action won't result in a "net decrease in food and commodity yields."

He asked Vilsack to provide updates to his office every two weeks.